Published July 5th, 2021 - 09:07 GMT
Women, who fled the violence in Ethiopia's Tigray region, stay awake while others sleep in a classroom at May Weyni secondary school, that turned in to a Internal Displaced People (IDP) camp registering 10500 people, in Mekele, the capital of Tigray region, Ethiopia, on June 22, 2021. Yasuyoshi Chiba / AFP
Highlights
Hundreds of thousands are unable to access basic life materials in war-torn Tigray 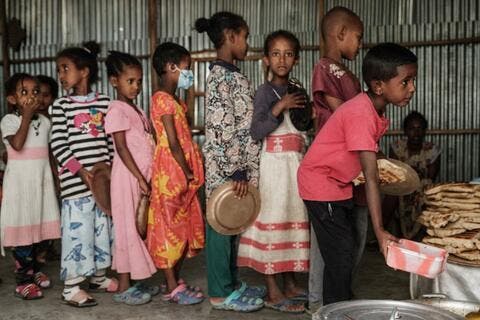 Acting Under-Secretary-General Ramesh Rajasingham said in a briefing to the Security Council Friday more than 400,000 people are now in famine conditions with another 1.8 million in danger despite the Ethiopian government's declaration of a ceasefire with Tigrayan rebels earlier this week.

#Tigray is effectively under siege by #Ethiopia, #Eritrea and the #Amhara region. Hundreds of thousands are already starving, millions will soon be joining them.

"Some are suggesting the numbers are even higher," Rajasingham said. "Thirty-three thousand children are severely malnourished and, moreover, the food insecurity crisis will continue to worsen during the impending rainy season, as food supplies are exhausted, and the risk of flooding and waterborne diseases, including cholera, increases.

"Considering where we already are, this means that more people will die if we do not reach them with humanitarian assistance."

The UN earlier this month urged armed groups to stop blocking access while forecasting that 350,000 people were at risk of famine -- the most worldwide since the 2011 famine in Somalia. Conflict between government and regional forces in Tigray since November has led to the hunger crisis.

Under-Secretary General for Political and Peacebuilding Affairs Rosemary DiCarlo renewed the call for "unhindered unrestricted access," in a tweet Friday.

She told the Security Council that 1.7 million people have been displaced in the fighting between Ethiopian troops and Tigray Defense Force, with 60,000 refugees crossing the border into Sudan. 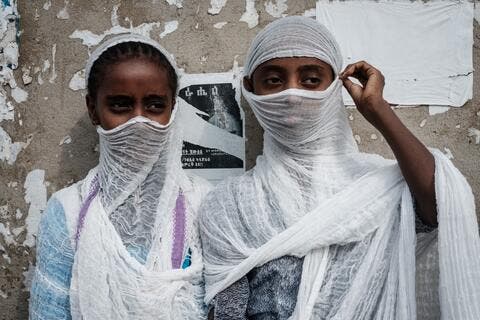 A Prayer For The People of Tigray!

More than 400,000 people in Ethiopia’s Tigray are now suffering famine and 1.8 million others are on the brink, says top UN official https://t.co/hDSlKh3mx5 pic.twitter.com/tQfGwXqgT3