Published April 24th, 2021 - 04:51 GMT
A Palestinian man carries a national flag during a rally in support of prisoners held in Israeli jails, in Gaza City, on April 18, 2021. MAHMUD HAMS / AFP
Highlights
"The right way to do would probably be to summon the Israeli ambassador to Denmark and pass on the government's demand,” it said. 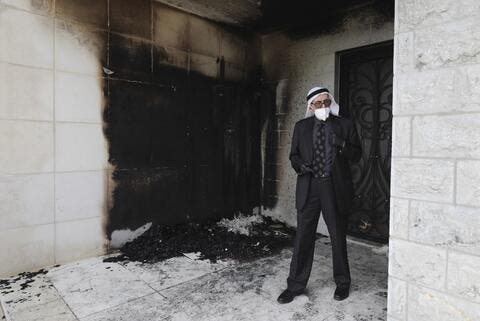 According to the Danish foreign ministry and the Oxfam humanitarian group, which are handling the project of “Integrated Market Development Program across the occupied Palestinian territories”, settlers have attacked the village of Deir Nidham north of Ramallah, destroying about 2,000 newly planted almonds trees and 800 meters of metal fencing.

Israel has founded at least 250 illegal settlements in the occupied West Bank and East Jerusalem, says the UN.

116 of them are "unofficial" outposts founded by settlers.

The UN says Israel has recognized at least 13 of them, and is planning to recognize 20 more. pic.twitter.com/1S66NzqX68

Danish Development Cooperation Minister Flemming Møller Mortensen said that he is “very concerned” about the attacks and has accordingly raised the matter with the Israeli authorities.

The UN says they:
-Block Palestinian access to their own farmland + property
-Are linked to destruction + vandalization of Palestinian property pic.twitter.com/JMpcYteJJT

“Any form of violent acts committed by settlers in the West Bank is unacceptable. Denmark regularly reminds Israel of its illegal settlements, both directly and indirectly through our partners in the EU,” Mortensen added.

The Danish Red-Green Alliance coalition party demanded compensation from the Israeli regime, saying “it's not the first time settlers vandalize the projects we fund in the West Bank".

"The right way to do would probably be to summon the Israeli ambassador to Denmark and pass on the government's demand,” it said.

According to Oxfam, which has gathered testimonies from 19 Palestinian families in Deir Nidham, whose fields have been destroyed and whose members have been violently assaulted by settlers, the attacks destroyed infrastructure worth $23,000.

This also occurs with Israeli troops on the sidelines, which would assist the settlers in harshly attacking the farmers with stun grenades, tear gas, and rubber bullets.

Jotam Confino, a journalist at Haaretz, has broadcasted a video on his twitter showing Israeli troops firing rubber bullets at Palestinian farmers, cultivating their land in the West Bank village of Deir Nidham.

The United Nations Office for the Coordination of Humanitarian Affairs (OCHA) “documented 771 incidents of settler violence causing injury to 133 Palestinians and damaging 9,646 trees and 184 vehicles”, only in 2020.