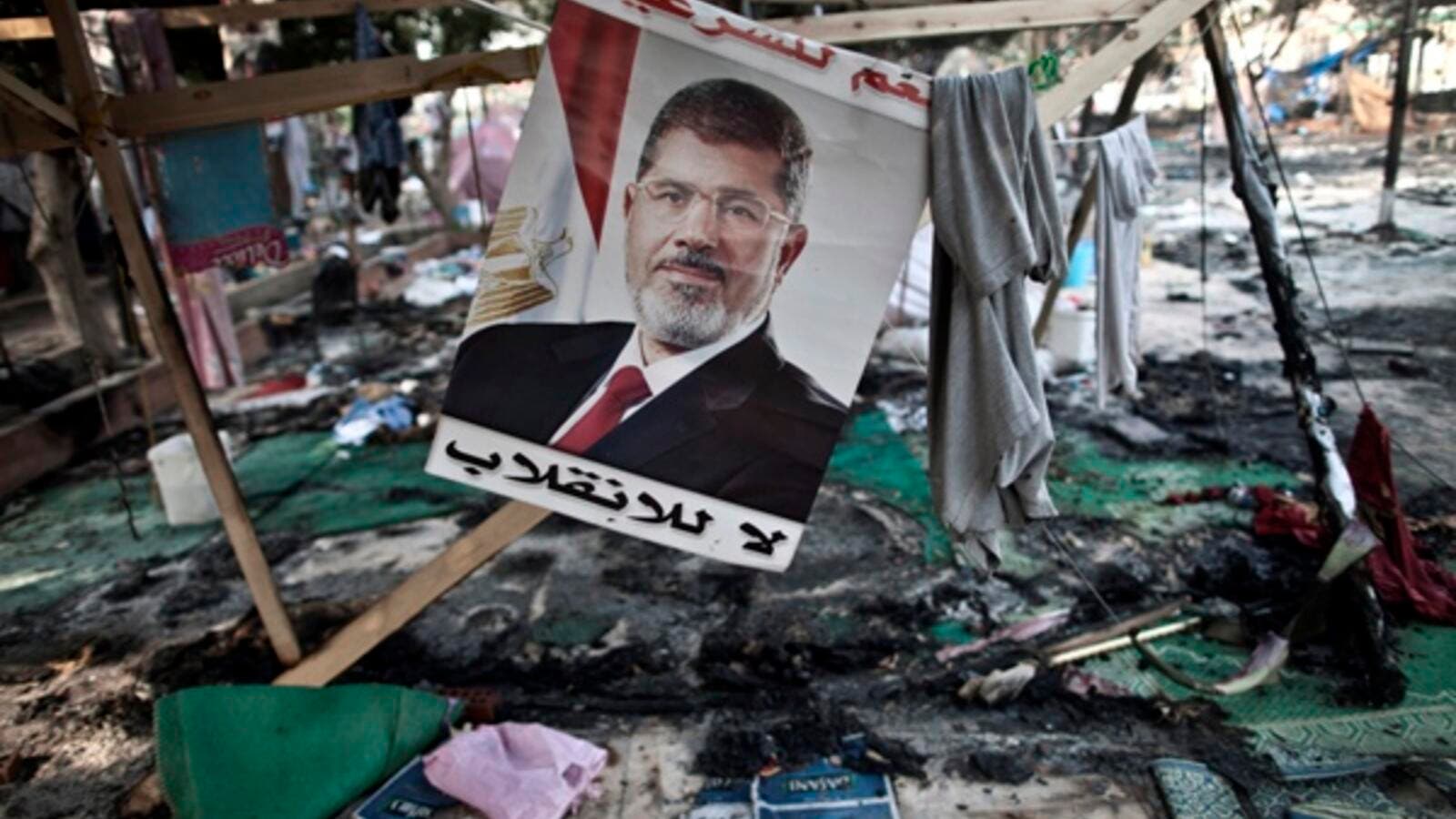 Now that pro-Morsi protests have subsided in Cairo, is the time right for political dialogue between the Muslim Brotherhood and the interim government? (AFP/File)

Emerging divisions within the pro-Morsi movement in Egypt means that now is the perfect time for the interim authorities to hold political dialogue with Muslim Brotherhood supporters, a senior Egyptian political activist told Asharq Al-Awsat.

Hassan Nafaa, a former coordinator-general for Mohamed El-Baradei’s National Association for Change, earlier this week put forward an initiative calling for political dialogue between the military-backed interim authorities and supporters of the ousted Islamist president.

In comments to Asharq Al-Awsat, Nafaa affirmed that there is a widening rift within the Anti-Coup Alliance, a coalition of mostly Islamist parties demanding the reinstatement of Mohamed Morsi as president. This comes after the Construction and Development Party, the political wing of Al-Gama’a Al-Islamiyya, and the Al-Wasat Party announced their readiness to engage constructively with the government. Nafaa put forward the initiative last week in a bid to resolve the current political impasse.

Nafaa told Asharq Al-Awsat: “I received more than one phone call from Al-Wasat Party figures who welcomed the initiative, expressing a readiness for interaction,” Nafaa said, adding that he was also in communication with three Building and Development Party figures regarding the prospective dialogue.

“The Strong Egypt Party, headed by former Muslim Brotherhood figure Abdel Moneim Aboul-Fotouh, has also showed an interest in the initiative and established communications [in order to] to start the dialogue,” he added.

In a statement issued on Sunday, the Anti-Coup Alliance expressed its readiness for the proposed initiatives, but Nafaa described the statement as “negative,” expressing his belief that the Brotherhood figures are not truly interested in taking part in dialogue with the government.

Egypt’s interim government designated the Muslim Brotherhood a terrorist organization in December last year following a deadly attack on a police headquarters in the northern city of Mansoura.

A source within the pro-Morsi Anti-Coup Alliance speaking to Asharq Al-Awsat on the condition of anonymity said: “There is no unified stance within the Brotherhood at this time; there are some who have realized that a political solution is a must, but comprehensive views on how to achieve this have yet to crystallize.”

“The major obstacle to the dialogue lies in the leadership figures’ ability to persuade the [Brotherhood] cadres to accept a political solution following all the bloodshed,” the source added.

Former Muslim Brotherhood member Dr. Kamal El-Helbawy concurred that the pro-Morsi movement in Egypt is faltering. He told Asharq Al-Awsat: “There is no rebellion, and there is division between the different generations within the Muslim Brotherhood.”

Helbawy famously served as Muslim Brotherhood spokesman in the West before resigning from the group during a live interview. He added: “The greatest divisions can be seen among the Brotherhood’s youth, from those who have simply stopped their political operations following the security crackdown, to those who have resigned or defected because they realized the extent of the group’s blunders and want to continue working as part of correct Islamist [political] work.”

Pro-Morsi protests have declined remarkably since Egypt marked the third anniversary of the January 25 Revolution last month. Nafaa told Asharq Al-Awsat that the decline in protests should not be read as a sign of the Brotherhood attempting to “pacify” the country, but as “evidence of the impact of the security crackdown.”

Since Morsi’s ouster, Egyptian authorities have launched a nationwide security crackdown against the Brotherhood, arresting a number of key political and organizational figures. The Salafist Al-Nour Movement has emerged as Egypt’s leading Islamist movement in the wake of Cairo’s designation of the Muslim Brotherhood as a terrorist organization, while other, more moderate, Islamist groups continue to operate on the scene.

Helbawy also served as a deputy in Egypt’s 50-member constitution-drafting committee, which drafted a constitution that outlaws political parties formed on a religious basis. He told Asharq Al-Awsat: “There can be no doubt that a new [Islamist] movement will be formed, and not necessarily originating from the same group [the Muslim Brotherhood]. This will be a new movement seeking to serve the Islamist project, and it will therefore be able to deal with the new situation.”

“If this new [Islamist] movement is unable to deal with the new status quo, it will be inconsequential,” Helbawy added.