Sudan and Egypt agreed to boost economic cooperation between the two countries and renewed their call for a legally binding agreement on filling and operating the Grand Ethiopian Renaissance Dam (GERD). 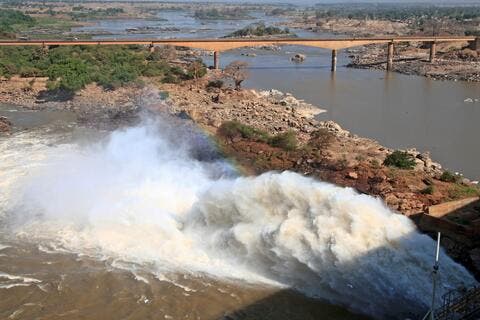 Egypt Calls For an Accord on Filling, Operating Renaissance Dam

The head of the Sovereignty Council, Abdel Fattah Al-Burhan, on Wednesday paid a short working visit to Cairo, during which he met with Egyptian President Abdel Fattah Al-Sisi.

The visit comes after similar trips to the UAE and Saudi Arabia, to discuss the deteriorating political and economic conditions in Sudan and to seek their support for his isolated military rule.

A statement issued at the conclusion of the visit said that the two parties agreed to strengthen economic relations and expand trade exchange. Also, they reiterated their determination to achieve agricultural integration and rail and electric linkage between the two countries.

The statement which reminds the old agreements of economic integration between the two countries did not omit the strong joint cooperation in the security and military fields, which “contributes to achieving the interests” of the two countries.

Without referring to the tough economic situation in Sudan, Egypt renewed its commitment to continue sending aid packages and logistical and humanitarian support.

After the military coup of October 2021, the international community and financial institutions suspended a financial and economic support program to implement economic reforms and prepare Sudan for a democratic transition.

Egypt refused to condemn the coup and since has no longer participated in meetings and statements issued by the Friends of Sudan group.

On the same day, Saudi Arabia deposited $5 billion in Egypt’s central bank to support the ailing Egyptian economy to deal with the effects of the war in Ukraine.

The joint statement said the two countries will continue “intensive consultations and mutual coordination” on the negotiations related to the GERD, and reiterated their call for a legal and binding agreement on the filling and operation of the giant dam on the Blue Nile.

Ethiopia is expected to start the third filling of the GERD reservoir next July but there is no agreement on the resumption of the tripartite talks under the auspices of the African Union.