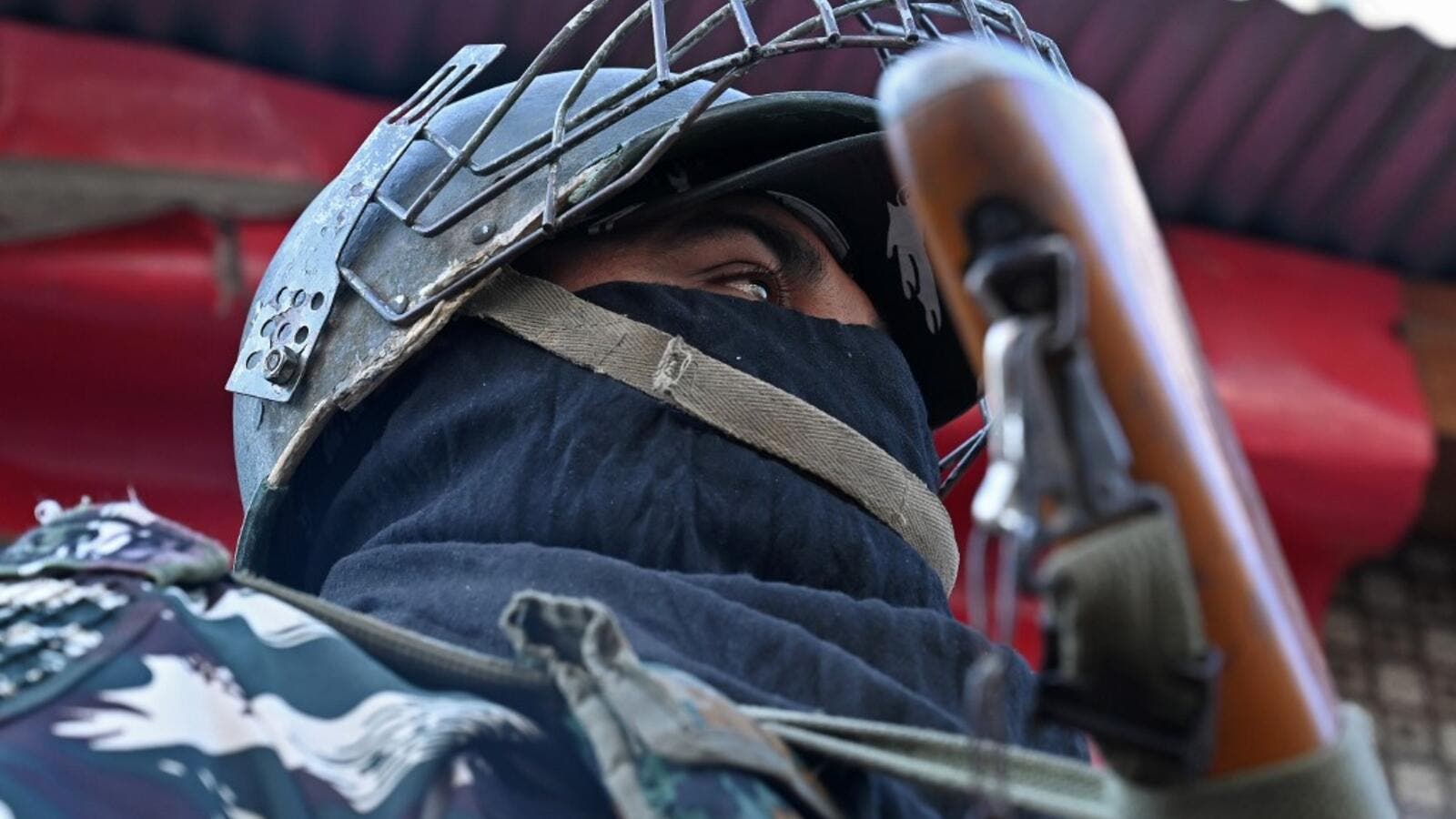 An Indian paramilitary trooper stands guard during heavy restrictions on movements in Srinagar (AFP)
Highlights
One put the barrel of a pellet-firing shotgun gun to his upper body and "fired a shell right into my right shoulder", the teenager said.

Families have accused Indian forces of indiscriminate brutality and mistreatment in Indian-administered Kashmir, more than a month after India stripped the restive region of its autonomy and severely restricted movement.

One of these cases is Burhan Nazir Parrey, 16, who had a gaping wound in his shoulder the size of a cricket ball.

He is one of the lucky ones. Locals accuse Indian security forces of being responsible for four deaths since New Delhi imposed a crippling lockdown on 5 August, cutting of phone and internet networks.

Parrey told AFP that he went out for a walk with a friend on the evening of 6 August and turning a corner ran into members of the paramilitary Central Reserve Police Force (CRPF).

One put the barrel of a pellet-firing shotgun gun to his upper body and "fired a shell right into my right shoulder", the teenager said.

Then one of the soldiers "put his boot on my shoulder and pushed the shell further inside", he said. "Another tried to crush my neck. I thought they wanted to see me dead right there."

Only when some women started shouting did the soldiers leave and neighbours took Parrey to hospital.

According to his father Nazir Ahmad, doctors located "more than 400 pellets" in his torso. Medical records seen by AFP showed that "multiple pellets and one plastic canister" were removed.

CRPF Inspector General Zulfiqar Hassan said there was "no report or record of this incident" but would launch an inquiry - if the boy filed a report.

Kashmir has been split between India and Pakistan since 1947. In the Indian-administered part, tens of thousands of people, mostly civilians, have died in an insurgency - that New Delhi blames on Islamabad - since 1989.

India's national security advisor said on Saturday that apart from a "vocal minority" egged on by Pakistan, a "majority" of Kashmiris support its 5 August move.

However, and despite restrictions on movement that were reinforced this week, there have been hundreds of protests and stone-throwing incidents.

According to multiple sources, several thousand people have been detained. They include almost all the region's top politicians - without charge.

Last month AFP spoke to relatives of three people they alleged have died as a result of the actions of security forces, including a mother-of-two after a tear gas canister smashed through her window.

On 25 August the governor of Jammu and Kashmir state, Satya Pal Malik, said there had not been a "single case of killing" in the previous 10 days.

The same day police said that a truck driver was killed on 25 August after being hit by a stone hurled by protestors.

Last week Asrar Khan, 17, became the latest fatality when he died in hospital on 3 September a month after being seriously injured.

Khan was playing cricket near his home in Kashmir's main city Srinagar on 6 August when soldiers fired at him, his mother told AFP.

"A CRPF vehicle stopped near the edge of the park and fired a tear gas shell straight at his head," Shaheena said as she cried in her home, supported by other women.

"I saw him fall and then they (soldiers) fired pellets on him."

Khan's hospital records, seen by AFP, showed he suffered "severe traumatic brain injury" and cited "pellet injury with shell blast injury" as the cause of death.

On Saturday the Indian government appeared to row back on Dhillon's statement, saying the cause of death was a "hard and blunt object" - but without saying what.

Khan's angry father Firdous Ahmad, showing a photo and X-ray of his son's face, said Dillon was "lying" and there were no protests the day he was hurt.

"My son will not come back, but I want the world to know the truth and see what is being done to our children in Kashmir," Ahmad told AFP.