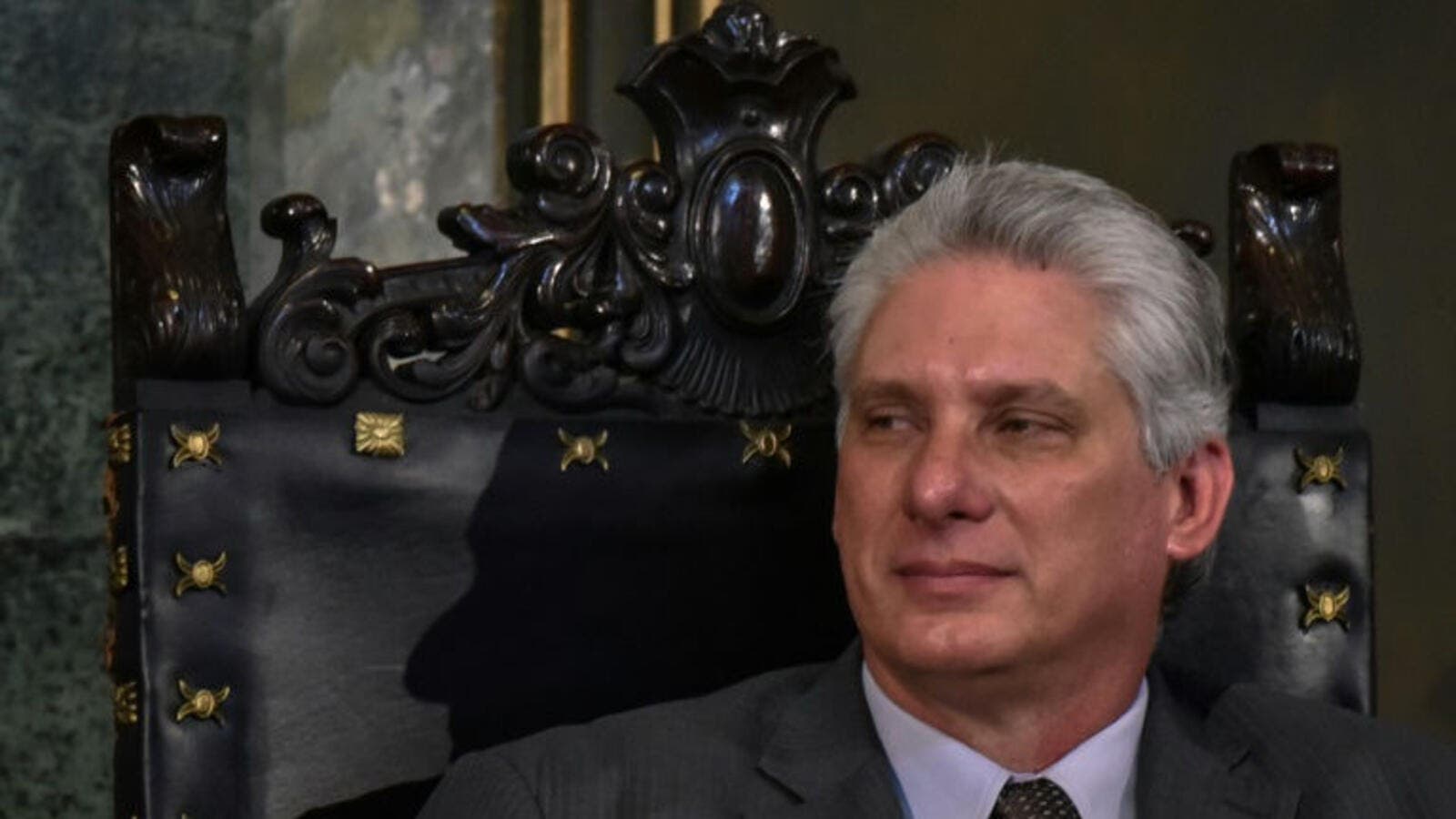 Miguel Diaz-Canel is the new boss of Cuba. (AFP/File Photo)

For the first time in decades, someone outside of the Castro family will rule over Cuba -- as President Raúl Castro is expected to step down Thursday.

Cuba's election commission on Wednesday nominated First Vice President Miguel Díaz-Canel as the only candidate to succeed the 86-year-old Castro as the island nation's next president.

Castro was originally intended to step down from the presidency on Feb. 24, but Cuba's National Assembly voted in December to extend the current legislative term to April 19, saying damage from Hurricane Irma delayed legislative elections in September.

Once confirmed by the National Assembly's 605 deputies, Díaz-Canel will take over -- and has said he will stick close to the Communist Party ideals of his sibling predecessors.

"I believe in continuity," he said. "I think there always will be continuity."

Díaz-Canel represents a new generation of Cuban leadership, which for decades has only known rule under Raúl Castro and older brother Fidel Castro -- the latter overthrowing the prior government in a New Year's Eve revolution in 1959.

"This will be the first time that you have in power as president someone who was born after 1959, after the Cuban revolution, somebody who was not part of the historic struggles of the 1950s to overthrow the Batista dictatorship," said Jorge Duany, director of the Cuban Research Institute at Florida International University.

While Díaz-Canel will take over the role occupied by the Castros for decades, Raúl Castro will maintain his role as the head of the country's Communist Party until 2021 and will remain in charge of the Cuban armed forces. Fidel Castro died in 2016.

"Given the fact that the Constitution of Cuba states that the Communist Party is the leading sector of society and that there is no room for any other political party, Raúl Castro will still remain a very powerful figure," said Duany.

University of Miami political science professor Michael Touchton said the transfer of power is an attempt to renew the Cuban Revolution from an internal perspective, and allow a generation of leaders -- including the Castro brothers' children -- to move into positions that will allow them to one day continue the family dominance under the island's Communist party regime.

"By extending beyond the immediate Castro family, at least symbolically, it suggests that this is not a personalistic dictatorship," he said. "Communist Party membership, ideology, loyalty and service are important and Diaz-Canel has all of those credentials."

Diaz-Canel was named first vice president of Cuba in 2013, an early signal that he might become the heir apparent to the Castro presidency, following years of service in the Communist Party.

"This guy's been loyal, he's made a few calls for reform, but very few recently," said Touchton. "He was moderate, in no way fomented dissent from his position and he's been there for a long time."

The transfer of power in Cuba is complicated by another power shift in the United States, as President Donald Trump has looked to roll back much of former President Barack Obama's large-scale efforts to normalize diplomacy with the Caribbean island nation.

"Since the Trump administration took office there has been less warmth in the relationship and actually quite a lot of hostility," Duany said.

In November, a year after he was elected, Trump implemented more restrictive regulations on American travel to Cuba which forbid Americans from engaging in business with 180 entities identified by the State Department as having ties to Cuban military, security or intelligence agencies.

Authorities still aren't sure what happened, but the attack indicated a possible return to years of frosty relations between Havana and Washington.

Trump's policies have led many observers in Cuba to believe the Obama-era efforts to thaw what had been substantially poor diplomatic relations, and his moves to relax of sanctions, are being pushed aside.

Additionally, since becoming first vice president, Diaz-Canel has adopted a hardline stance on Cuba-U.S. relations, more in line with that of Fidel Castro, who ruled Cuba during the tumultuous 1960s -- which saw events like the Cuban Missile Crisis (1962) and Cuban trade embargo (1961), which continues today.

"There's an argument internally for hardliners to retain control and a hardline approach to Cuban-American relations to be the dominant diplomatic strategy and policy choice on the island," said Touchton.

Touchton added Diaz-Canel isn't likely to fulfill the expectations of observers both inside and outside Cuba, who believe the change in leadership could result in reform of civil liberties and political rights on the island.

"What happens in Cuban domestic policy colors Cuban relations with the United States because it offers hardliners in the U.S. government ammunition for strengthening sanctions, undoing the Obama-era reforms and returning to the status quo pre-Obama," he said.

While the Castros will hand the reigns of the nation to someone beyond their family Thursday, the landscape of the nation will still be shaped by their decades of dictatorial Communist rule.

Born in 1926 in Biran, Cuba, to a wealthy farmer, Fidel Castro grew up to study politics and at the age of 32 led a revolution to overthrow Fulgencio Batista's regime, becoming Cuban prime minister in 1959 after the New Year's Day overthrow of Batista's government.

In 1961, the United States formally ended diplomatic relations with Cuba and in April backed a group of some 1,500 CIA-trained Cuban exiles to invade the Bay of Pigs -- with the intention of overthrowing the island's communist regime. They were defeated by the Cuban army -- largely because U.S. President John F. Kennedy refused to provide air cover for the armed exiles.

In October 1962, the United States discovered the Soviet Union was building missile installations in Cuba, leading Kennedy to blockade the island with Navy warships, which lasted for a month, until the Soviet nuclear stash in Cuba were dismantled.

Fidel Castro assumed the post of Cuban president in 1976, in addition to his role as Communist Party first secretary since 1961, and drove the island nation to become a one-party Communist state bent on ending years of government corruption he said operated under the Batista regime.

In the spring and summer of 1980, Castro opened the Mariel Harbor in Cuba to 125,000 Cubans island citizens who sought life in the United States. The Mariel Boat Lift, as it became known, landed a sizable Cuban population on the shores of Miami -- and led some to accuse Castro of releasing thousands of dangerous criminals from Cuban prisons into the migrant pool.

Cuba-U.S. relations were further strained in November 1999, following a lengthy custody battle between the Cuban father of 5-year-old Elian Gonzalez -- the lone survivor of a group who'd attempted to reach the United States by boat -- and the boy's relatives in Florida.

Fidel Castro served as Cuba's president until he abdicated power to his brother Raúl Castro in 2008, following years of declining health. Raúl Castro acted as president during the last two years of his brother's tenure and served two more five-year terms before stepping down, expected Thursday.

During their rule, the Castros placed tight restraints on Cuba's private sector and prohibited many citizens from owning computers, cellphones and other technology and running many types of private business.

While Raúl Castro helped modernize the nation during his decade as president, he also stymied Cuba's growing private sector by again limiting contracts for private businesses and continued to control information by making Internet access prohibitively expensive for the average citizen.