Gaza fisherman are happy they can fix their boats

It's a "great achievement", he said after sanding down the faded paint as part of a team of workers patching up rickety boats with sheets of newly-imported fibreglass.

The material has been prohibited from entering the Palestinian enclave since 2007, as one of scores of items Israel deems could be used for military purposes by Gaza militants.

The measures have left fishermen struggling for years to pursue their livelihood due to the state of the boats - until the United Nations brokered a deal that allows fibreglass to reach a supervised workshop.

"I started working at this workshop two weeks ago... for the fishermen and for us as technicians, this provided a job opportunity," said Jerboa.

Gaza has one of the world's highest unemployment rates at nearly 50 percent, according to World Bank data.

Dust flies as the team gets to work, within view of a security camera, while the smell of fresh paint drifts across the fenced yard from a recently refurbished boat.

Rows of unseaworthy vessels rest in the sand nearby, with rusty parts and covered in scratches, laying bare the scale of the task at hand.

Manal al-Najjar, a coordination officer at the United Nations Office for Project Services - which handles infrastructure projects - said there are still some 300 boats to be fixed.

After months of negotiations with Palestinian and Israeli officials, the UN reached a deal which allows enough fibreglass for 10 boats to enter Gaza at a time.

"The repair process takes two weeks to a month for every 10 boats," Najjar said.

With the first repaired boats hitting the water, she added that fishermen so far are happy with the project as "the price is very reasonable and the quality of the materials is high".

Standing near piles of nets at the port, fisherman Saleem al-Assi was one of the first to be selected for the project and agreed the costs were low. 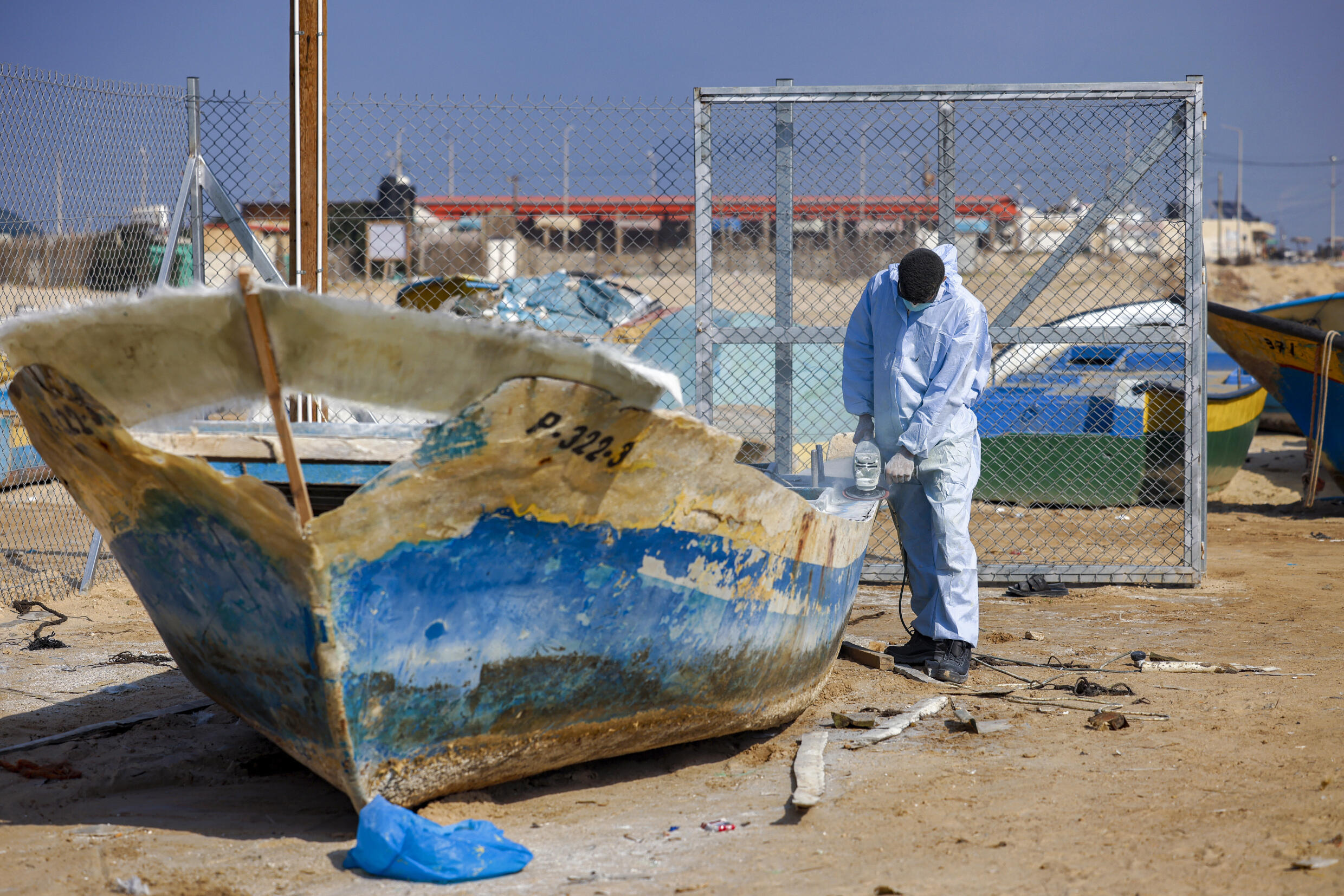 In addition to the difficulty to obtain materials, the Gaza fishing industry has been hit by restrictions at sea © MOHAMMED ABED / AFP

"I've had boats out of action for eight years and they need a lot of fibreglass," said Assi, who has around 50 relatives working in the fishing trade.

"Hundreds of fishermen applied to the project, but the project can't cover everyone," he added.

In addition to the difficulty to obtain materials, the fishing industry has been hit by restrictions at sea.

As part of Israel's blockade on Gaza, imposed in 2007 after the Palestinian militant group Hamas took power, the navy enforces a fishing zone that limits the catch.

Israel has fought four wars with Palestinian militants over the past 14 years, as well as a three-day conflict in August which left 49 Gazans dead.

At the port, Assi welcomed the fibreglass project but lamented that he still cannot get his family's nine boats out to sea. 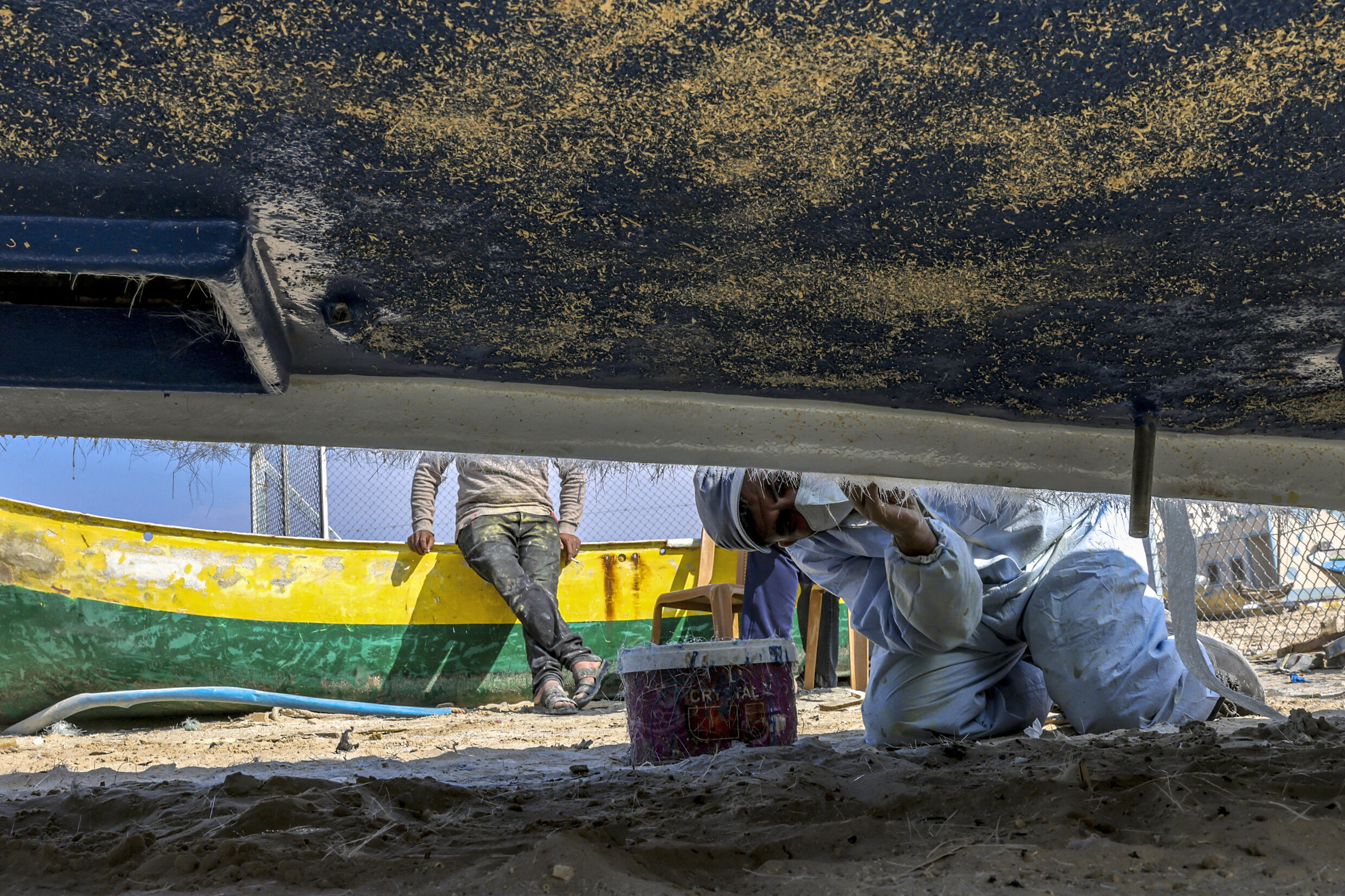 As part of Israel's blockade on Gaza, the navy enforces a fishing zone that limits the catch © MOHAMMED ABED / AFP

"We only have two motors. Motors are non-existent," he said.

Najjar acknowledged the shortage and said the UN plans to import motors as part of its project.

Standing beside the calm Mediterranean waters, Assi said the lack of equipment due to Israeli restrictions has "suffocated us".

"I don't know why Israel is blocking their entry. Will rockets be fired from boats?"