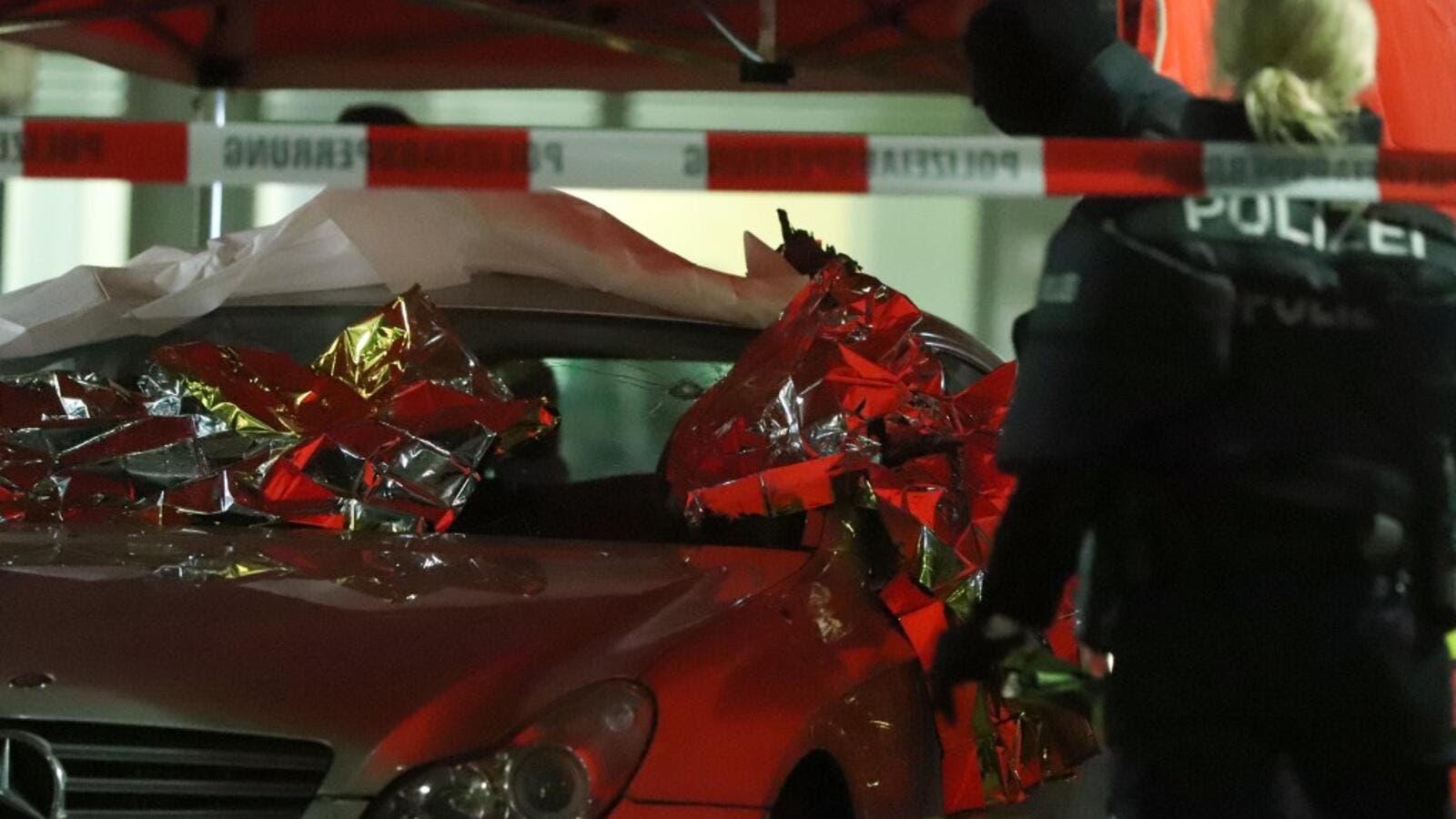 Emergency services and police work at the scene of a shooting in Hanau, western Germany, on February 20, 2020. At least eight people were killed in two shootings late on February 19 near the German city of Frankfurt, with an unknown number of attackers still at large, police said. The shootings targeted shisha bars in Hanau, about 20 kilometres (12 miles) from Frankfurt, according to local media, and police launched a huge manhunt in the town of around 90,000 people. Yann Schreiber / AFP
Highlights
They did not give details of his possible motive or how he died, or specify why they believe 'with a high degree of probability' that he was the assailant.

Nine people were shot dead and up to six more were critically hurt after at least one gunman opened fire on two shisha bars last night in the German town of Hanau.

A huge manhunt launched to find the shooter seemingly ended early this morning with the discovery of two bodies in a house nearby - one of which was said to be 'the attacker'.

Earlier another man was arrested near the scene of one of the shootings but it was unclear what his role in the attack may have been. Helicopters had scoured the area with police declaring a manhunt to be 'in full swing' after the bloodbath.

The motive for the attack remained unclear after the bodies were found at the house. Local reports said Turkish or Kurdish people were among the victims at the bars.

Police gave no details of the suspected gunman but said 'there are currently no indications of further perpetrators.'

They did not give details of his possible motive or how he died, or specify why they believe 'with a high degree of probability' that he was the assailant.

Officers sealed off and searched the apartment in Hanau's Kesselstadt district, near the scene of one of the shootings, after following up witness statements on a getaway car.

'Thoughts this morning are with the people of Hanau, in whose midst this terrible crime was committed,' German Chancellor Angela Merkel's spokesman said on Twitter.

'Deep sympathy for the affected families, who are grieving for their dead,' the spokesman, Steffen Seibert, said. 'We hope with those wounded that they will soon recover.'

Earlier Thursday, police said that eight people were killed and around five wounded. They said a dark vehicle was seen leaving the location of the first attack and another shooting was reported at a scene about one-and-a-half miles away.

Police officers swarmed central Hanau, cordoning off the area of one of the shootings as a helicopter hovered overhead. A car covered in thermal foil also could be seen, with shattered glass next to it. Forensic experts in white overalls collected evidence.

'This was a terrible evening that will certainly occupy us for a long, long time and we will remember with sadness,' Hanau Mayor Claus Kaminsky told the Bild newspaper. Lawmaker Katja Leikert,a member of Merkel's centre-right party who represents Hanau in the German parliament, tweeted that it was 'a real horror scenario for us all.'

Hanau is about 12 miles east of Frankfurt. It has about 100,000 inhabitants and is in Hesse state.

An attacker is said to have rung the bell at the Midnight shisha lounge and sprayed bullets at people inside when he was let in. He then fled the scene in a dark-coloured car before gunfire rang out at a second bar, Arena, less han two miles away.

At the Midnight bar, one witness told German newspaper Bild: 'Someone with a gun came in and shot people.' Other witnesses told of eight or nine shots ringing out just after 10pm local time with one man seen lying prone on the ground after the shooting.

A silver Mercedes covered in thermal foil blankets with shattered glass next to it could be seen standing outside Midnight bar after the killings, behind a police cordon.

Bullet casings were left scattered across the road after the massacre and a man was seen being handcuffed by police.

Forensic experts in white overalls collected evidence from the scene as emergency services swarmed the area.

Heavily armed police sealed off two streets where ambulances had rushed and a police helicopter hovered over the city.

Around thirty police cars were seen leaving Hanau police station and, according to witnesses, police officers with machine guns were deployed across the city.

Early today local mayor Claus Kaminsky said: 'It's a terrible evening.' He urged people not to speculate over the motive.

'This will certainly occupy us for a long, long time and we will remember with sadness,' he added.

The area's MP Katja Leikert tweeted: 'On this terrible night in Hanau, I wish the families of those killed a lot of strength and condolences.' She said she was 'shocked' by the incident.

Germany has been targeted in recent years by several extremist attacks, one of which killed 12 people in the heart of Berlin in December 2016.

But far-right attacks have become a particular concern for German authorities.

In October, a deadly anti-Semitic gun attack in the eastern city of Halle on the holy day of Yom Kippur underscored the rising threat of neo-Nazi violence. The rampage, in which two people were shot dead, was streamed live.

Last June conservative politician Walter Luebcke, an advocate of a liberal refugee policy, was shot at his home.

On Friday police arrested 12 members of a German extreme right group believed to have been plotting 'shocking' large-scale attacks on mosques similar to the ones carried out in New Zealand last year.