Published May 22nd, 2021 - 08:00 GMT
Palestinian President Mahmoud Abbas speaks during an emergency meeting of the Fatah Central Committee and the PLO Executive Committee in the occupied West Bank City of Ramallah, on May 12, 2021. Gaza militants have launched more than 1,000 rockets since the beginning of this week according to Israel's army, which has carried out hundreds of air strikes in the crowded coastal enclave of Gaza. ABBAS MOMANI / AFP
Highlights
From the beginning of this month, tensions in the compound reached boiling point when the Israeli army first entered the compound and attacked protesters and worshippers.

In the aftermath of a ceasefire in besieged Gaza and a postponed presidential election, some Palestinians say Abbas must go. 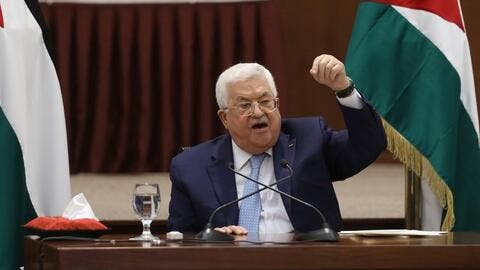 When a ceasefire after recent Israeli aggression was reached on May 20, people in the Palestinian territories, West Bank and Gaza celebrated it widely.

The next morning, the al Aqsa compound in east Jerusalem echoed with a crowd of Palestinians chanting: “The people want to overthrow (the president)”. They were, of course, referring to the Palestinian President Mahmoud Abbas. The Fatah party that he leads dominates the Palestinian Authority (PA) government and only exercises limited autonomy.

Palestinian President Mahmoud Abbas and US Secretary of State Anthony Blinken have been on the phone to discuss the Israeli-Hamas ceasefire. pic.twitter.com/gMGfBNHxjO

From the beginning of this month, tensions in the compound reached boiling point when the Israeli army first entered the compound and attacked protesters and worshippers.

Hamas, the group that controls Gaza, warned Tel Aviv to withdraw its security forces attacking worshippers in Jerusalem’s Al Aqsa mosque. Then the group fired the first rocket aimed at Israel after the Israeli army stormed the mosque on a night that Muslims consider the holiest of the year. In Gaza, Israel’s relentless bombing killed over 200 people while Hamas rockets killed 12 in Israel, until the recent ceasefire. But Palestinians are not happy with their leadership.

“Muslims around the world also do not want Abu Mazen, who is silent in front of the Zionist tyranny,” said a Twitter user referring to Abbas, as he reacted to a video capturing the scene in al Aqsa compound.

“The very necessary step in order to continue on our right path,” said another user.

A leaderless revolt pushed for the ceasefire

Palestinian protestors and activists have long accused Abbas of not taking a more active role in dealing with Israeli aggression. Rather than giving credit to the Palestinian Authority Abbas leads, many are confident that it was a leaderless revolt that created a push for a ceasefire.

This is not the first time Israeli forces have entered the compound, or Gaza has been bombarded by Israeli rockets. But this time, there was a significant youth-led coordination in the West Bank, particularly in occupied East Jerusalem.

Before Israel’s storming of the al Aqsa compound, a small neighbourhood in East Jerusalem, Sheikh Jarrah witnessed an unprecedented resistance, particularly from its young residents.

In April, an Israeli court ordered the forced expulsion of residents of six homes in the neighbourhood. In practice, it meant handing over their homes to Jewish settlers who already showed up at their doorstep, accompanied by Israeli police forces.

The incident found wide coverage on first social media, and then other mainstream media thanks to its young residents like Mohammed al Kurd and Muna al Kurd. Protesters kept posting updates, documenting the crimes that were committed in their neighbourhoods.

The Kurd family was on the frontline of organising protests that finally forced the Supreme Court to postpone the forced eviction decision.

“Mahmoud Abbas should step aside and let @m7mdkurd represent the Palestinian people,” one Twitter user said on May 15, tagging Mohammed Kurd’s Twitter handle.

However, this is not the first time that Palestinians have expressed this frustration with the ageing Mahmoud Abbas.

Mahmoud Abbas has called for a national unity government following the violence between Israel and Gaza. Having not heard directly from Abbas after the 11 days, Hamas described the move as "not serious." @AdnanAbuAmer2 has more: https://t.co/OdMAKajvL7

The 85-year-old leader’s term formally expired in 2009, but he has continued to govern the Palestinian Authority by decree for 12 years.

Among frustrated Palestinians craving for change, the sentiment has been swelling ahead of a presidential election that had been scheduled for July 31, for the first time in 15 years. 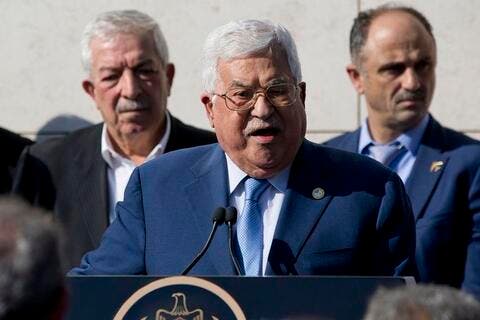 However, the leader announced the vote would be postponed indefinitely until Israel agreed to allow Palestinians in occupied East Jerusalem to participate.

Some argued that his decision was taken, in fact, due to his unpopularity, especially after the emergence of significant rivals that could challenge his position within the party: Nasser al Qudwa, nephew of Yasser Arafat, who founded Fatah and the iconic first leader of the Palestinian people, and Mohammed Dahlan, a controversial figure in exile.