Published July 4th, 2021 - 06:45 GMT
Ocean is in flames in the Gulf of Mexico after a gas leak in an underwater pipeline sparked fire. (Twitter)
Highlights
Several boats were seen trying to suffocate the blaze with water

The ocean off Mexico's Gulf Coast was up in flames Friday after a gas leak from an underwater pipeline sparked a fire on the surface of the water. 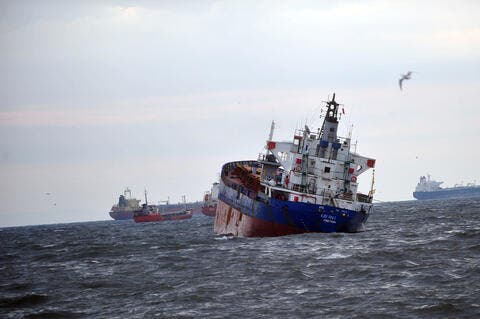 The blaze was dubbed an 'eye of fire' on social media due to its circular shape, while several boats were seen rushing to suffocate the flames.

Mexico's state-owned oil company Petroleos Mexicanos, known as Pemex, later confirmed the fire had been put out, blaming a rupture in one of its underwater pipelines.

Sources told Reuters the fire began in an undersea gas pipeline that connects to a drilling platform at Pemex's flagship Ku Maloob Zaap offshore oil development field, located just up from the southern rim of the Gulf of Mexico.

The gas leak ignited a fire 150 meters from the platform around 5:15am local time, forcing the company to shut the valves of the 12-inch-diameter pipeline.

Pemex said it dispatched fire control boats to pump water over the flames while sources also said workers had used nitrogen to battle the blaze.

At least three boats were seen surrounding the circle of fire and dousing it in water in aerial footage of the incident.

The blaze was extinguished and the gas leak brought under control about five hours later and normal operations restored, Pemex said.

The oil company said the incident resulted in no injuries and that its production had not been affected due to the time of the leak.

The cause of the incident will be investigated, it said.

According to a source, the incident report said 'the turbomachinery of Ku Maloob Zaap's active production facilities were affected by an electrical storm and heavy rains.'

Ku Maloob Zaap is Pemex's biggest crude oil producer, accounting for more than 700,000 barrels or more than 40 percent of its nearly 1.7 million barrels of daily output.

Pemex has a long history of major and deadly industrial accidents at its facilities.

In April, a major fire broke out at its Lázaro Cárdenas refinery in Minatitlán near the Gulf of Mexico, leaving seven people injured.

This came after Mexico encountered its deadliest pipeline explosion in its history in a village in Mexico in January 2019.

The Tuxpan-Tula pipeline, which carries fuel from Mexico’s east coast to a refinery in Tula, near Tlahuelilpan, had been punctured in Hidalgo and local residents were siphoning fuel from the leak.

In 2016, 28 people were killed in an explosion at the company's petrochemical plant in the southeastern oil hub of Coatzacoalcos, months after a worker died in a separate fire at the same plant.

Three years earlier, at least 37 died in a blast at Pemex's Mexico City headquarters in 2013 while a fire at a natural gas facility in northern Mexico killed 26 the year before.