Hady Amr on Nasrallah, Israeli Elections and the New Rules of Engagement 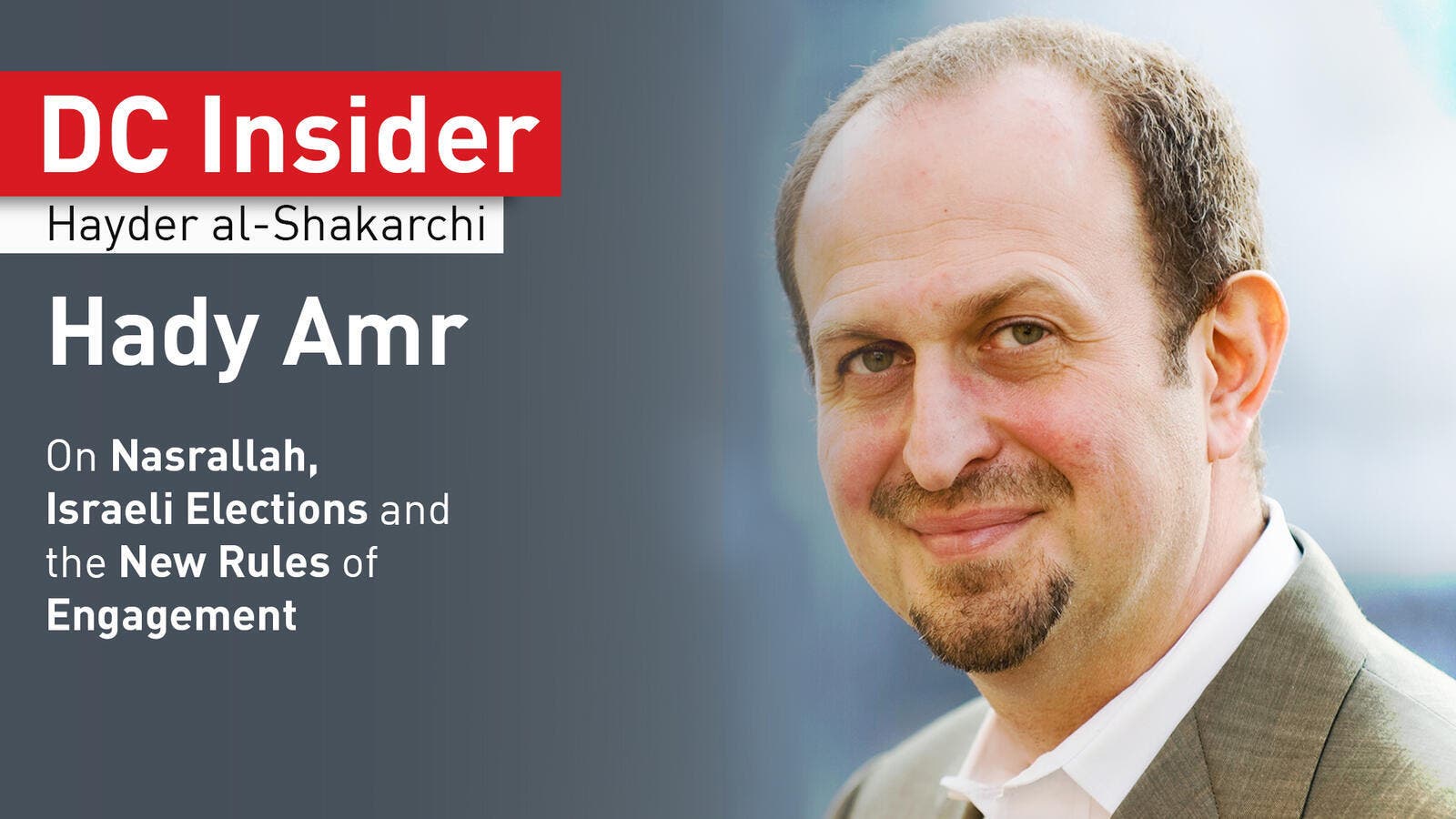 In recent weeks, Israel and Hezbollah have been constantly going head-to-head with one another. However, neither party has the desire to wage full-on war. Amidst all the violence, a scandalous recording has been leaked that could quite possibly jeopardize Israeli Prime Minister Benjamin Netanyahu’s future in office and could even lead to incarceration.

In a televised appearance, Hezbollah leader Sayyed Hassan Nasrallah emphasized that Sunday’s attack was simply a prelude to a series of upcoming aerial attacks on Israeli drones in Lebanon. "I tell the Israelis, we no longer have red lines because you changed the rules of engagement." What do you believe Nasrallah meant by no longer having “red lines”?

“One hears that although Israelis despise Nassrallah, they also view him as a man who delivers on his word. I think Nashrallah feels a great sense of frustration at Israel’s overwhelming strength and ability to violate Lebanese airspace at will. I think by saying ‘we no longer have red lines,’ Nasrallah is saying Hezbollah may respond in a more general sense, not just an eye for an eye.”

In your opinion, how have the rules of engagement been changed from Nasrallah’s viewpoint?

“Look, Israel is a country that has a higher GDP per capita than France or Japan. It has the strongest military in the region, and it’s a nuclear power. It’s GDP is larger than any Arab country except Saudi Arabia and the UAE. There’s clearly no way for any country or group to actually compete with Israel head to head. That doesn’t mean that a militant group like Hezbollah can’t cause Israel great headaches or even loss of life—it can. I think what Nasrallah was saying was that whenever the next Hezbollah-Israel war happens, it thinks it can cause Israel far greater harm than in the last round. While this may be true, let’s not forget that Israel has immense and overwhelming power and will almost certainly extract a far greater price from Hezbollah.”

There’s clearly no way for any country or group to actually compete with Israel head to head. That doesn’t mean that a militant group like Hezbollah can’t cause Israel great headaches or even loss of life—it can.

Israel’s Channel 13 recently leaked recordings of Netanyahu from 2017 in which he could be heard shouting at former Communications Minister Ayoub Kara while attempting to meddle in regulations governing television broadcasting. Who could have been behind this leak and what could their ultimate agenda be?

Israel is consumed with the upcoming elections. On the one hand, Netanyahu has a lot of political enemies within Israel, and many who dislike him from within his own party.

In response, Netanyahu singled out specific journalists, news executives and company shareholders, claiming that they are playing a role in a "terror attack against democracy.” Would you agree?

“Netanyahu is a master politician who is very comfortable frightening his electorate to vote for him as the one who can save and protect Israel. I wouldn’t say that Netanyahu is Trumpian... Netanyahu was on the scene long before Trump. So if anything Trump may have fashioned his own political career after Bibi. At the moment, Netanyahu is not just trying to win an election, he’s also trying to avoid indictment. He’s got a hierarchy of needs and number one is to avoid a ending up like former Prime Minister Olmert who went to jail.

Whether that means provoking Hezbollah, calling the press ‘the enemy of the people’, getting Trump to make some dramatic announcement just like he did last time with U.S. recognition of the Golan, or stirring up fear in his supporters with statements like ‘Arab voters are heading to the polling stations in droves’... He’ll stop at nothing to win this election.”

... He’ll stop at nothing to win this election

Thus, would it be fair to assume that Trump is, and has always been, molding himself in Netanyahu’s image?

“I don’t think of Trump as an analyst. I don’t think he consciously modeled himself after Netanyahu. I think he works instinctively. But Trump and Netanyahu are clearly kindred spirits... They both feel comfortable with a right-wing approach to politics that vilifies the media. They both feel comfortable with race-baiting, and they seem happy to support one another.”

Following Sunday’s retaliatory strike by Hezbollah, in which it claimed to have taken the lives of several Israelis, Netanyahu emphasized that the attack resulted in “no casualties, no wounded, not even a scratch.” According to the Israeli military, its goal was to bring forth a ceasefire by convincing Hezbollah that it had actually succeeded in its task. Could this hoax be a hoax within a hoax?

“We clearly live in a world in which anything is possible. That said, because Israel is a society in which the vast majority of the population is conscripted and serves in the military, I don’t think it would be easy for the Israeli military to flat out lie to its own people about the death of their own soldiers. Sure, there’s the strategic ambiguity on the nuclear front and that’s understood as a national security issue but being dishonest with their own population about the death issues of Israeli soldiers- I think is probably a step too far for Israeli society.”

In that case, why come out so soon after and reveal their inner workings? Wouldn’t that just anger Hezbollah even more, thereby causing them to fire back with a vengeance?

Again, all of this has to be seen within the frame of the upcoming elections. Whatever Netanyahu does is about his reelection. He’s desperate to win. Desperate. So if Netanyahu decided to reveal the hoax, then he must have decided it was good for his election prospects. Netayahu’s core is about public relations. Whatever you think about former Israeli prime ministers Rabin or Sharon, they were entirely different animals than Bibi—they focused on actions first, and worried about public relations second.”

As Israel and Hezbollah clashed alongside the Lebanon border on the same day of Hezbollah’s retaliation, Lebanese Prime Minister Saad al-Hariri called U.S. Secretary of State Mike Pompeo and France's top diplomat, "asking the United States and France to intervene."

In response, a U.S. State Department official released a statement emphasizing that they are “aware of these reports and are concerned about the escalating tensions along the border,” while adding that “the United States fully supports Israel’s right to self-defense." It does not make any sense for the U.S. to actually be “concerned” yet support “Israel’s right to self-defense” while the violence is occurring in Lebanon, a place in which the only people that should have the right to self-defense are the Lebanese. Is this not one of the clearest forms of bias that this administration has shown?

“First of all, this is nothing new... Whenever Israel is in a military conflict, the United States generally backs Israel’s right to respond. But it’s also important to listen carefully to America’s press guidance. Whether it’s coming out of the White House or out of the State Department, press guidance and press statements are where a President, the Secretary of State, and their senior political advisors show their true colors. It’s where they can quickly and easily show empathy to those they like and anger to those they dislike.

Although Trump’s tweets take this to a whole new level, press statements represent the voice of the political team around the leaders. Press statements are a clear indication of their sentiments and the direction things are going. I know. I’ve been in the room when press guidance has been written.”