Haitian Migrants Denied Entry to The US

Published September 21st, 2021 - 09:08 GMT
United States Border Patrol agents on horseback try to stop Haitian migrants from entering an encampment on the banks of the Rio Grande near the Acuna Del Rio International Bridge in Del Rio, Texas on September 19, 2021.(Photo by PAUL RATJE / AFP)
Highlights
Haitian migrants are being deported by the US border partol.

Haiti has protested the United States’ mass expulsion of Haitian migrants from the state of Texas and forcibly sending them to the crisis-hit island-country. 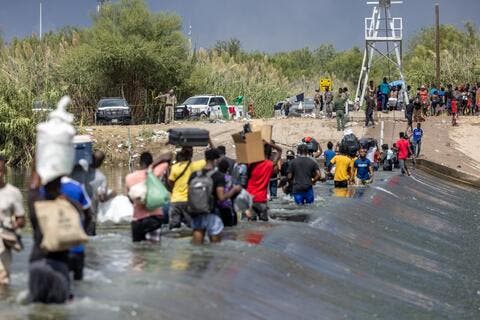 The US has so far flown out hundreds of mostly Haitian migrants on the border separating Texas and Mexico and intends to “quickly” deport 12,662 others over the next week.

This photo of Haitian migrants at the Texas border being whipped by a border patrol agent, like in the good old days, says a lot. The nostalgia is real. pic.twitter.com/Xu48sRsZpj

On Sunday, over 320 other migrants arrived in Haiti’s capital Port-au-Prince, after they were deported by American officials. These migrants, plus thousands of others, had been camped around a bridge in Del Rio, Texas, after crossing from Ciudad Acuña, Mexico.

The migrants on Sunday were forcibly returned on three flights to Haiti, which says six flights are expected Tuesday.

Separately on Sunday, Haiti protested the US mass expulsion of desperate Haitians. Authorities of the island country had earlier beseeched Washington to halt the flights since Haiti is in crisis and cannot handle thousands of homeless deportees.

“We are here to say welcome, they can come back and stay in Haiti — but they are very agitated. They don’t accept the forced return,” said the head of Haiti’s national migration office, Jean Negot Bonheur Delva.

He added that authorities expected that some 14,000 Haitians would be deported from the US over the coming three weeks.

The administration of US President Joe Biden says it is moving quickly to expel them under a Donald Trump-era pandemic order.

WH Press Secretary calls images of what looks like border patrol on horseback rounding up Haitian migrants with whips "horrific" & says this should never happen again.

She adds that she needs the "full context" but doesn't think anyone seeing this would see it as "acceptable." https://t.co/GtaJttBz78

“The Haitian state is not really able to receive these deportees,” Bonheur Delva stressed.

Back in July, Haitian President Jovenel Moise was assassinated and his wife was seriously wounded after gunmen stormed their home in the hills above the capital Port-au-Prince. Later on, the Pentagon revealed that some of the former Colombian servicemen arrested after the assassination had been trained by the US military.

Furthermore, a report in the same month also revealed that several of the suspects had ties to the US, including serving as informants for the FBI. 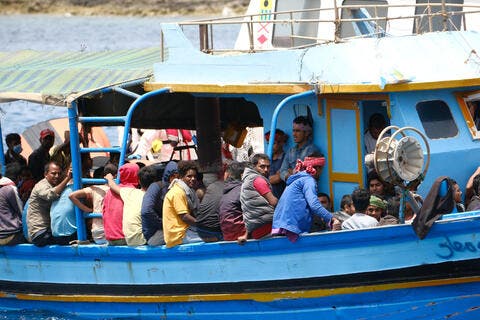 The assassination opened up a political vacuum just as Moise and other civil leaders were preparing for elections and discussing revisions to Haiti’s constitution.

Since the assassination, Haiti has been hit by two natural disasters, a 7.2-magnitude earthquake, and a heavy storm. The first killed nearly 2,000 people, and the second triggered landslides and flash floods, which further displaced the population and delaying the country’s recovery.