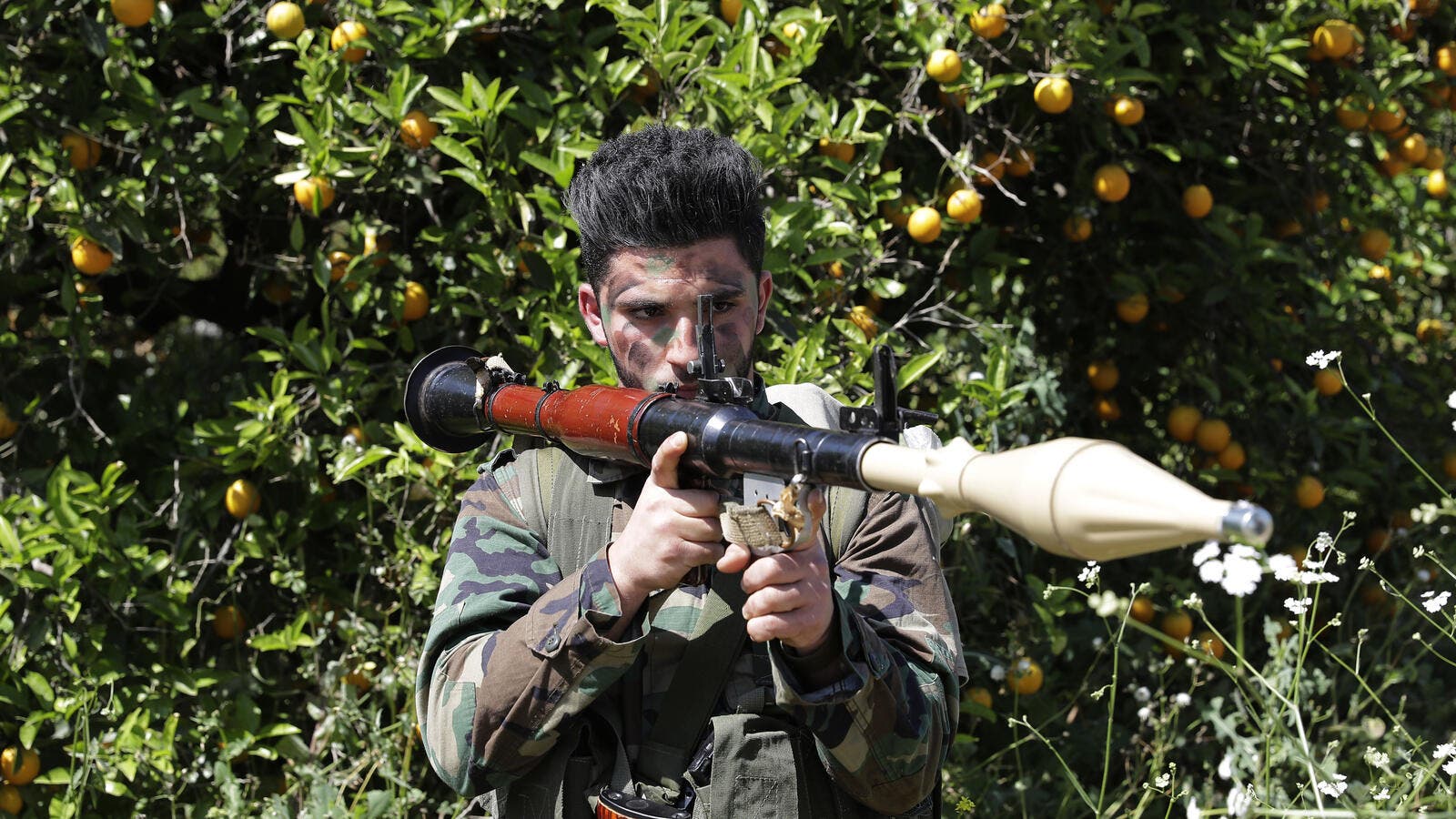 A Hezboallah fighter armed with an RPG stands near Lebanon's border with Israel, April 20 2017. (AFP/Joseph Eid)

President Michel Aoun Monday warned that new United States sanctions targeting Hezbollah and its affiliates would "harm all of Lebanon."

"It [sanctions] would not complement the current Lebanese-American relations," Aoun said during a meeting with a delegation from the Washington D.C.-based non-profit, the American Task Force for Lebanon.

He added that Lebanon is keen on promoting stronger relations with the United States.

Lebanon recently came into the spotlight in the U.S. after Congress planned to review additional, tougher sanctions against Hezbollah, its affiliates and allies. The move could have negative political and financial ramifications in the country if the proposals passe without amendments.

A number of congressmen hammered out a draft called “Hezbollah International Financing Prevention Amendments Act of 2017” that is mainly aimed at cutting off all forms of financial support to the party, which is labeled by Washington as a terrorist organization.

The U.S. Treasury has published a list of around 100 Hezbollah personality and organizations associated with the party.

Lebanese banks complied with the list without hesitation because they were aware of the grave results if the lenders failed to close the accounts of all the names in the list.

The purpose of the amendments were also to target all political groups in Lebanon that have strong alliance with Hezbollah and the Amal Movement surfaced for the first time in the new proposal.

The 20-page congressional proposal said that among those who should be added to the list of U.S. sanctions are the secretary-general of Hezbollah, members of the Hezbollah political bureau, parliamentarians (including Cabinet ministers) belonging to Hezbollah and any other senior members of Hezbollah, Amal, or other associated entities that the secretary of treasury considers important.

The authors of the draft copy outlined a list of alleged terrorist activities committed by Hezbollah abroad in general and South America in particular.

The report said that the measures taken by the U.S. Treasury in 2015 has tightened the financial noose on Hezbollah. It cited Adam Szubin, acting undersecretary of the Treasury for Terrorism and Financial Intelligence, as saying: “In fact, today Hezbollah, we believe, is in the worst financial condition it’s been in decades. And that’s not just a U.S. government assessment, that’s the assessment I hear from our allies from around the world including the Middle East, who share our concerns with Hezbollah in a very palpable way.”

U.S. Ambassador to Lebanon Elizabeth Richard said that their support for Lebanon's security sector is "long-term".

She also announced that the United States will provide training for Lebanese security personnel.

Aoun also laid out Lebanon's priorities with the visiting delegation.

He said they were the Syrian refugee crisis, combatting terrorism, maintaining security on the Lebanese-Syrian border, stopping Israel's violations in southern Lebanon, and the full implementation of U.N. Security Council Resolution 1701.

Resolution 1701 was unanimously approved on Aug. 11, 2006, in an effort to end the Israel-Lebanon conflict.

One of the key points of the resolution was the total disarmament of Lebanese and non-Lebanese militias.

The Cabinet voted unanimously in favor of accepting the terms the following day.