Since the formation of Lebanon’s new government on January 21, foreign policy experts and Israeli officials have expressed increased concern over the influence of Hezbollah on the country’s future political direction. Lebanon’s new cabinet, led by the officially unaligned Hassan Diab, relies on the backing of Amal and Hezbollah, the country’s biggest Shia parties, as well as President Michal Aoun’s Christian Free Patriotic Movement.

Former Prime Minister Saad Hariri’s Future Movement, the Christian Lebanese Forces party, and the Progressive Socialist Party of Druze leader Walid Jumblatt all refused to participate in the new government. The government’s reliance on Hezbollah, the party’s increasing influence on Lebanon’s Armed Forces, and its own significant network of patronage and service provision leaves it, to some, in the driver’s seat as Lebanon enters another month of uncertainty.

However, whilst the group’s leaders and supporters may have long jockeyed for such a position, sitting behind the wheel is not so attractive a prospect in a crashing car. In reality, despite its ongoing political influence and oversized military capability, Hezbollah finds itself in an increasingly precarious position.

Long seen as a ‘state within a state’ in Lebanon, Hezbollah has been labelled by former American ambassador Jeffrey Feltman as ‘Iran’s most successful revolutionary export.' Since the end of Lebanon’s decade and a half civil war, the Shia movement has established itself as a political mainstay in the divided country, augmenting its influence at the expense of its Shia rival, Amal, and other political actors.

Long seen as a ‘state within a state’ in Lebanon, Hezbollah has been labelled by former American ambassador Jeffrey Feltman as ‘Iran’s most successful revolutionary export.'

In spite of its avowed ideological radicalism, Hezbollah has proved itself a particularly astute political navigator. Its staunch resistance to the state of Israel has won it supporters in Lebanon’s South. Its opposition and willingness to openly confront Sunni jihadist movement has increased its popularity in an era in which Sunni radicalism has proved the main force of destabilisation in the Middle East and North Africa.

Its provision of welfare and services to party members as well as the disenfranchised and poor, has allowed it to enjoy genuine popularity. Though its leader Hassan Nasrallah is a much reviled figure in the West, his ostensible personal piety and modesty has allowed him to avoid many of the accusations of corruption and impropriety that have plagued much of Lebanon’s political class.

Yet recent events in Lebanon and the wider region do not augur well for the Party of God. In the first instance, the support provided by Hezbollah for the country’s beleaguered government, may prove a risk. As Hassan Diab’s government continues to experience the shocks of an acute economic crisis, Lebanon’s national debt is among the highest in the world at 150% of GDP and is forced to continue to stare down widespread national protest, his enablers in Hezbollah may find themselves sharing part of the blame.

As overseas creditors push for financial reform, the brunt of austerity will be felt most acutely by Lebanon’s poorest, the majority of whom are Shia. Though Mr Nasrallah may present himself as above the political fray and untouched personally by corruption allegations, his support and alliance building with unpopular figures such as the leader of Amal, Nabih Berri, may prove especially damaging. 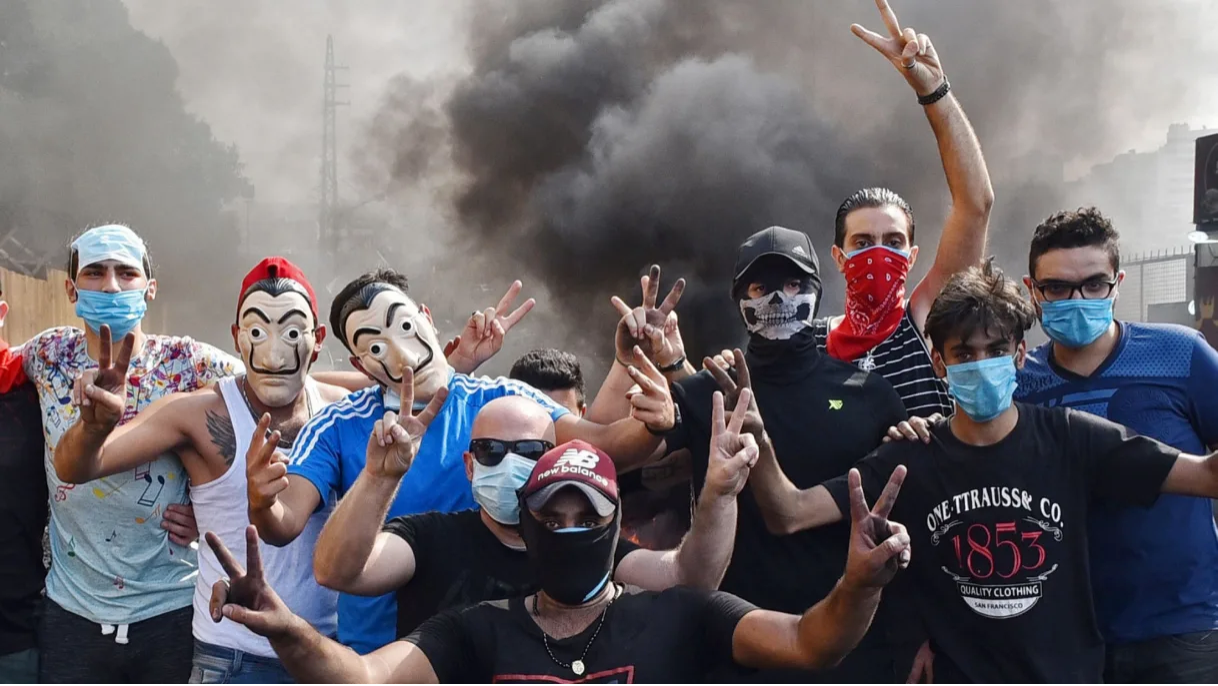 Part of Hezbollah’s success has stemmed from its ability to play both outsider and insider in Lebanese politics. Where government policy and provision prove popular, Hezbollah tends to take credit; where it proves divisive and contrary to the interests of the party’s base, it is blamed on coalition partners, international interference and opposition undermining. Yet as Hezbollah becomes increasingly central to governance in Lebanon, its ability to divert blame decreases.

Part of Hezbollah’s success has stemmed from its ability to play both outsider and insider in Lebanese politics.

Yet even if Hezbollah avoids blame for the country’s governing agenda, its woes run deeper still. In the first instance, Hezbollah finds itself unusually financially strained. As Iran, Hezbollah’s main overseas sponsor, finds itself gripped by sanctions induced financial crisis and domestic pressure, its provision of resources to overseas partners is likely to be curtailed.

As Mr Nasrallah astutely noted in 2016, ‘As long as Iran has money, we have money’. Though the exact budget of the organisation is unknown, it is thought that Iran provides Hezbollah with some $700 million a year, some 70% of its assumed financial budget.

As Mr Nasrallah astutely noted in 2016, ‘As long as Iran has money, we have money’. Though the exact budget of the organisation is unknown, it is thought that Iran provides Hezbollah with some $700 million a year, some 70% of its assumed financial budget.

In 2009 and 2014, Iran’s funding for Hezbollah was cut on the basis of its own dire financial predicament, a situation which has surely re-emerged in recent years. Though Hezbollah is still able to finance itself through other means, including international criminal activity and party donations by affluent Shia domestically and internationally, plugging such a financial gap will prove difficult.

An increasingly draconian sanctions regime employed on Hezbollah linked accounts by governments in North America and Europe will also continue to stem the flow of capital and resources to Mr Nasrallah’s party.

Hezbollah also faces challenges from its political base. Costly involvement in wars in Syria and Yemen, though often popular with Shia Lebanese have increasingly diverted resources away to welfare programs and social service provision, key to maintaining high levels of party support.

High levels of casualties among Hezbollah personnel in overseas conflicts, particularly those that have proved unexpectedly protracted such as the seizure of Idlib province in Syria, are also a cause of consternation.

Costly involvement in wars in Syria and Yemen, though often popular with Shia Lebanese have increasingly diverted resources away to welfare programs and social service provision, key to maintaining high levels of party support.

Playing on sectarian rhetoric and offering security to Lebanon’s Shia community has increasingly fallen on deaf ears as large swathes of a cross-sectarian Lebanese population take to the streets demanding reform. The emergence of a unifying Lebanese national identity may prove the most important factor in undermining the influence and success of Hezbollah and many of its other sectarian based political rivals.

In spite of these challenges, Hezbollah remains a formidable political and military player in Lebanon. Its tens of thousands of members, financial capital and institutional access will allow for continued strength in the short term. Increasingly belligerent foreign policy decisions made in Tel Aviv and Washington may allow the group to mobilise a political coalition around opposition to overseas interference in Lebanon’s domestic political space.

In spite of these challenges, Hezbollah remains a formidable political and military player in Lebanon.

The high profile killing of Major General Qassem Soleimani, a close friend of Mr Nasrallah, has already rallied Hezbollah’s base. Yet as protesters demand an end to sectarian governance and corrupt politics and seek to forge a new national identity free from the ghosts of the past, Mr Nasrallah’s powerful movement may find itself struggling as much as its political rivals.