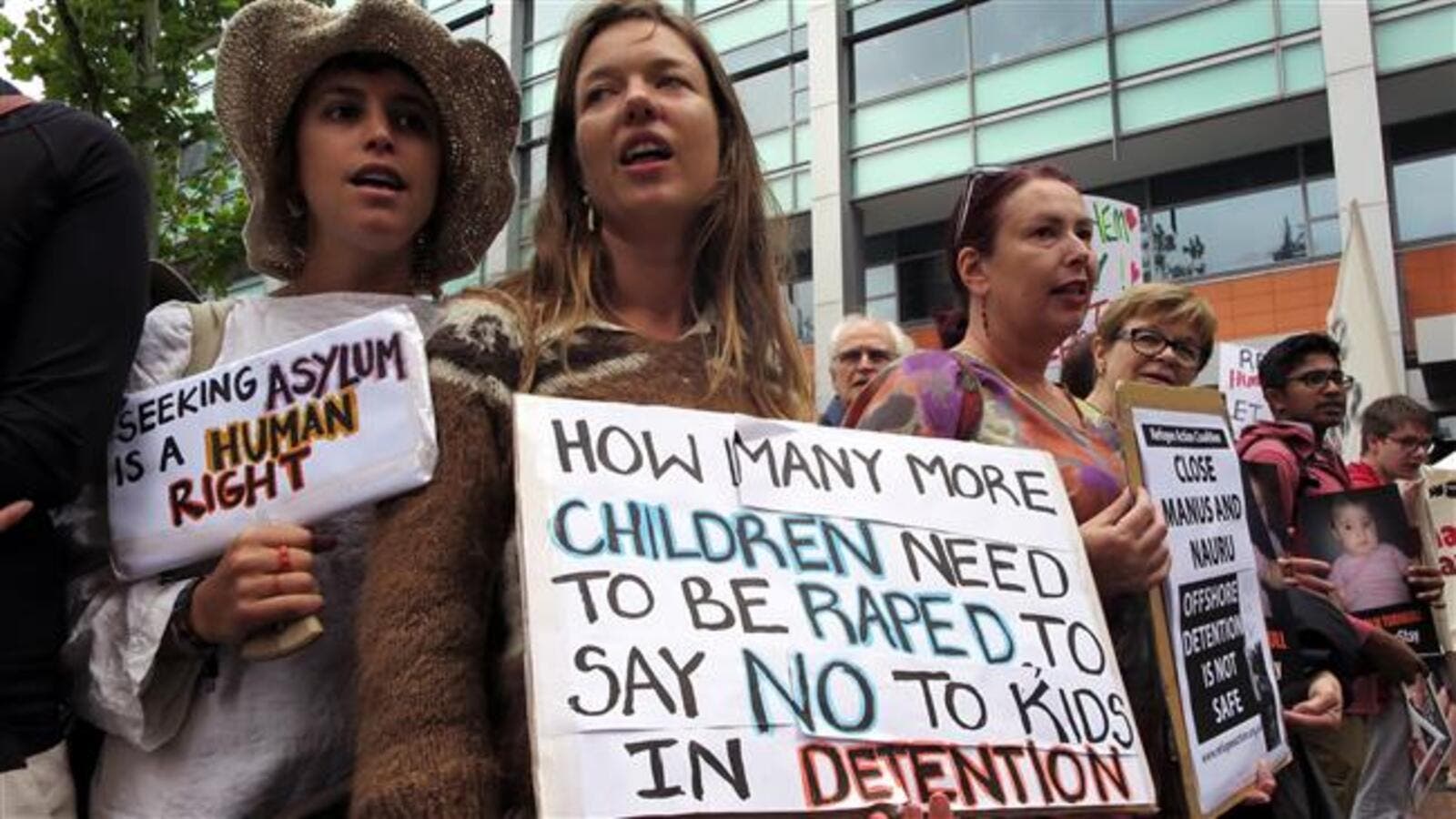 This image taken on February 4, 2016 shows human rights activists holding placards at a protest rally outside an immigration office in Sydney, Australia. (AFP/File)

The documents revealed by The Guardian are "a small sample of hundreds of reports" filed between January and March 2016 on Nauru under Australia's offshore detention regime, the British daily said on Monday.

While the Australian government has sought to diminish as "hype" earlier accounts of self-harm, abuse and sexual assault, the new reports reveal the situation is even worse.

The reports tell of children stubbing out cigarettes on their arms, trying to jump off buildings and attempting suicide by other means.

One disturbing story is related to a refugee who refused to report her alleged rape to Nauruan police.

The woman reported that she had been waiting for a bus when she was grabbed, pushed into a car, driven away, then raped by two men.

She was dropped at another location and, according to the report, told "that if she told anyone they would kill her."

The new reports also include a number of serious allegations of self-harm by children. In one report, a child refugee under 15 tried to jump off the balcony of his home in an attempt to kill himself but his father stopped him.

Another refugee reported that her child brother had "self-harmed by burning his arms with cigarettes and cutting his wrist with a knife."

The incidents follow the first leaks of 2,116 reports revealing the trauma and abuse inflicted on refugees held by Australia on the remote Pacific island of Nauru.

The revelations have shown how the Australian government has failed to respond to warning signs and reveal sexual assault allegations – many involving children – that have never been previously disclosed.

On Friday, the UN High Commissioner for Human Rights (OHCHR) in the Pacific Chitralekha Massey renewed international calls on Australia to shut down Nauru, describing its refugee policy as a “violation” of human rights.

Australia’s Immigration Minister Peter Dutton, however, played down the dangerous conditions at the refugee centers, describing continuous sufferings there as “hype”.

The Nauru Regional Processing Center, opened in 2001, is one of many offshore Australian refugee detention camps run by the government as part of its mandatory detention policy.