How is Hamas Going to Free Palestinian Prisoners in Israeli Jails?

A senior leader of the Palestinian resistance movement, Hamas, says the issue of Palestinian prisoners in Israeli jails is a top priority for the people of Palestine, stressing that the movement is determined to secure their freedom. 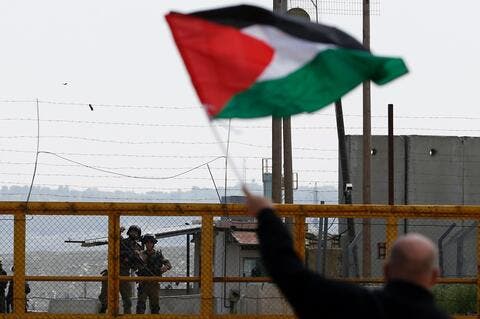 “We say that we are keen on conveying the prisoners’ message to all regional and international platforms,” Khaled Meshaal said in a television interview on the occasion of the Prisoner's Day on Sunday, which is marked by the Palestinians on April 17 every year, the Palestinian Information Center reported.

Meshaal went on to say that the main task for Hamas and all Palestinian factions is to guarantee the freedom of Palestinian prisoners, noting that the Gaza-based resistance movement is pursuing all available means to alleviate the suffering of the detainees and to release them.

He underlined the fact that Israel does not release Palestinian prisoners except through resistance, not through negotiations or bargaining, stressing that they will force Israel to free the detainees.

On Palestinian Prisoner Day, hundreds of Palestinians remain unjustly imprisoned and under Israeli administrative detention, with no access to legal support or the outside world. This purposeful system is often used to break the spirit & dignity of Palestinian resistance. pic.twitter.com/E6TOGxn9An

“The resistance is the way to liberate Palestinian land and prisoners”, Meshaal said.

Earlier in the day, the Palestinian Ministry of Foreign Affairs and Expatriates called upon the international community as well as signatories to the Geneva Conventions to take on their responsibilities concerning protection of Palestinian detainees.

The ministry said in a statement that Israel must be held accountable for its persecution of Palestinian people, including its mass and arbitrary detentions.

The Geneva Conventions, four international treaties that aim to protect people not involved in conflict — civilians, medics, prisoners of war and soldiers who can no longer fight — were adopted on August 12, 1949 after lengthy deliberations.

The silence of the international community has enabled Israeli authorities to continue the policy of arbitrary detentions and systematic violations against Palestinian prisoners, their families, and their rights, the Palestinian foreign ministry said.

The ministry further pledged to continue working on the legal, political and diplomatic levels to ensure the protection of the inmates.

Israel keeps thousands of Palestinians behind bars in dire conditions even despite the coronavirus outbreak, which has seen many international rights organizations campaigning for the release of the inmates amid the pandemic.

More than 7,000 Palestinian prisoners are currently held in some 17 Israeli jails, with dozens of them serving multiple life sentences.

Over 350 detainees, including women and minors, are under Israel’s "administrative detention".

Israeli jails forbid Palestinian prisoners from making phone calls, even to their lawyers, but allow israeli criminals to use their phones regularly https://t.co/koxEWkxSvN

The so-called administrative detention, which is a form of imprisonment without trial or charge, allows authorities to incarcerate Palestinians for up to six months. The duration could be extended for an infinite number of times.

Some prisoners have been held in "administrative detention" for up to 11 years.