Published May 11th, 2021 - 06:32 GMT
A Palestinian man helps an injured older man near al-Aqsa Mosque in Jerusalem (AFP/FILE)
“All of Jerusalem belongs to me," an Israeli settler told Palestinian residents of Sheikh Jarrah, behind the protection of Israeli soldiers.

“All of Palestine belongs to me,” he continued in a video recorded by Mohammed Kurd, a Palestinian journalist whose family lives in Sheikh Jarrah.

In the past two weeks, Israeli government and settler efforts to seize Palestinian-owned homes in the East Jerusalem neighborhood of Sheikh Jarrah set off a cascade of protests.

Local residents of Sheikh Jarrah first stood in their homes and out in the streets of the neighborhood, then Palestinians from other parts of Jerusalem joined them in protest. Demonstrations in solidarity with the residents resisting displacement in Sheikh Jarrah were quickly organized in Haifa, Nazareth, Yafo, Gaza, and around the Old City of Jerusalem which had seen Jewish supremacists marching through the streets chanting “Death to the Arabs” just three weeks prior.

Now, after Hamas fired several volleys of rockets toward Jerusalem and parts of southern Israel, the Israeli military has begun bombing Gaza. At least 26 have been killed by the strikes in Gaza, including nine children.

The recent escalation of events in Israel and Palestine offers a rare window into the cacophony of support systems for the Israeli state and its military, all of which have sprung into high-gear in defense of the settlers of Sheikh Jarrah. From Israel’s labyrinthian set of property laws and bureaucratic procedures, which amounts to lawfare against Palestinians, its zealous settlers and well-trained soldiers, to the international support Israel receives from social media companies that censor Palestinian content and even local American politicians, who go out of their way to defend the political interests of the settlers.

A stark difference for the Sheikh Jarrah-related protests has been the power of local Palestinian residents, activists, and journalists, in showing their reality on the ground. They’ve reached millions through Instagram, Facebook, Twitter, and have become an anchor for many seeking further information on the ongoing demonstrations, Israeli political actions, and the safety of the Palestinians seeking to keep their homes.

Zahra (@zhashx) Explains what is currently going on in Palestine. Said way better than I could. Stand for your Muslim brothers and sisters 🙏🏽#SaveSheikhJarrah pic.twitter.com/hxYgnz76qr

The process of settling a Palestinian-owned and occupied section of the West Bank, in violation of international law, involves a three-pronged approach between Israel’s bureaucracy, its settlers, and its soldiers. Though they do not always directly coordinate, the spectacle of Sheikh Jarrah illustrates how they can nonetheless contribute to the same political goal of displacing Palestinians.

In late April of this year, Human Rights Watch released an in-depth report detailing how Israel’s treatment of Palestinians amounts to apartheid, an internationally recognized crime. A key component of the report was how Israel’s legal apparatus systematically denies Palestinians the right to own property.

According to the report, in areas under full Israeli control in the West Bank, Israeli approved less than 1.5 percent of Palestinian applications to build between 2016 and 2018, 21 housing structures in total, which is “a figure 100 times smaller than the number of demolition orders it [the Israeli state] issued in the same period.” Israeli building permits, on the other hand, were granted 23,696 housing units between 2009 and 2020.

Israel’s own government-commissioned report in 2003 stated that land seizures and other related “expropriation activities were clearly and explicitly harnessed to the interests of the Jewish majority.”

This was the machinery operating behind the scenes in Sheikh Jarrah ensuring the process of displacement occurred in a timely and punctual manner. Though Israel delayed further displacements of Sheikh Jarrah residents for 30 days due to the intensity of the protests, this represents only a blip of time to the bureaucratic machinery.

On the ground, Israeli settlers, many of whom are ideological zealots, work consistently to accelerate the process of displacement and escalate the tension between them and their Palestinian neighbors. At times, settlers will claim a piece of Palestinian land by simply erecting tents and makeshifts homes on top of them with scrap metal, tarp, and bricks.

The audacity of a settler living on stolen Palestinian land to say we should pay rent to US-registered settler organizations to live in OUR OWN HOMES.

Anyway, here it is straight from the horse’s mouth: pic.twitter.com/ixfnk9liYO

The settlers who are poised to seize the homes of Palestinians in Sheikh Jarrah, have been seen wandering the streets of the neighborhood with assault rifles, and have reportedly broken into several homes already, where they have smashed the belongings of those inside.

Accompanying the unbridled violence of the settlers is the Israeli army, who manages the reactions to these violent spectacles and safeguards the settlers from their new neighbors. In the case of Sheikh Jarrah, it has been the Israeli army blocking off entrances to the neighborhood and barring non-resident protestors from getting near the homes slated to be seized.

It has also been the Israeli army that has suppressed protests against the seizures throughout the country, and assaulted al-Aqsa mosque, the third holiest site in Islam, four nights in a row. As of press time, over 700 Palestinians have been injured by Israeli police and military tactics repressing protests and violently raiding mosques.

Almost immediately after settlers began attempting to seize homes in the East Jerusalem neighborhood, videos showing Palestinians pleading for their homes to callous settlers began circulating widely online. Then, as protests ramped up, videos of Israeli occupation forces’ brutality against Palestinians were shared widely on Instagram.

Many of their photos and videos capturing the violent tactics used against them were quickly censored by Facebook. This systematic censorship, activists tell Al Bawaba, contributes to the same essential project of disempowering Palestinians to which Israel has dedicated itself.

One Palestinian activist, who wished to remain anonymous for fear of reprisal against her, said she woke up one morning to see all her posts documenting protests and police brutality in Sheikh Jarrah had all been deleted from her story. “I only had one story that was blanked out from my archives, but for the rest of my stories, Instagram just flat out deleted them and i no longer have record even in my archives,” she explained.

the fact that they are fasting and fighting for their country without weapons makes them soldiers. palestinians are the bravest. may allah swt protect them all #SavePalestine #SaveSheikhJarrah pic.twitter.com/6dQpl4n74V

“I definitely think that these social media outlets are trying to silence the movement so people don’t know what’s happening in Sheikh Jarrah,” she continued. “Things have only gotten tense so recently, so social media coverage has blown up exponentially.”

She added that some of her stories have also been removed for so-called ‘hate speech,’ despite only showing Palestinian protests with no caption or description.

Facebook, which owns Instagram, explained that it was a “technical issue” which removed thousands of Palestinian posts documenting violent Israeli occupation forces tactics, including the use of horses to stampede protests, the indiscriminate deployment of stun grenades and tear gas, as well as beating Palestinian protests to the ground.

A key hashtag used during the protests, and generally in the region, ‘#Al-Aqsa’ was banned outright during this period by Facebook. A representative for Mohammed El-Kurd, who has been active in posting daily videos showing settler and Israeli security forces' violence, showed Al Bawaba a series of screenshots detailing Instagram's threats of deleting his account and the removal of dozens of clips from his account.

Another hashtag "#SaveSheikhJarrah" started trending around the world on Twitter, garnering millions of tweets per day and peaking as the second-most widely shared hashtag in the world.

“While Facebook claims that its goal is to 'give people a voice', it's the voices of the marginalized and the oppressed that are disproportionately targeted and censored,” Marwa Fatafta, a Palestinian activist explained to Al Bawaba.

“For years now, Facebook has systematically censored Palestinian speech through tailored content moderation policies, at the behest of the Israeli government. The latest of those is their so-called Zionist policy which would further suppress Palestinian voices and narratives. 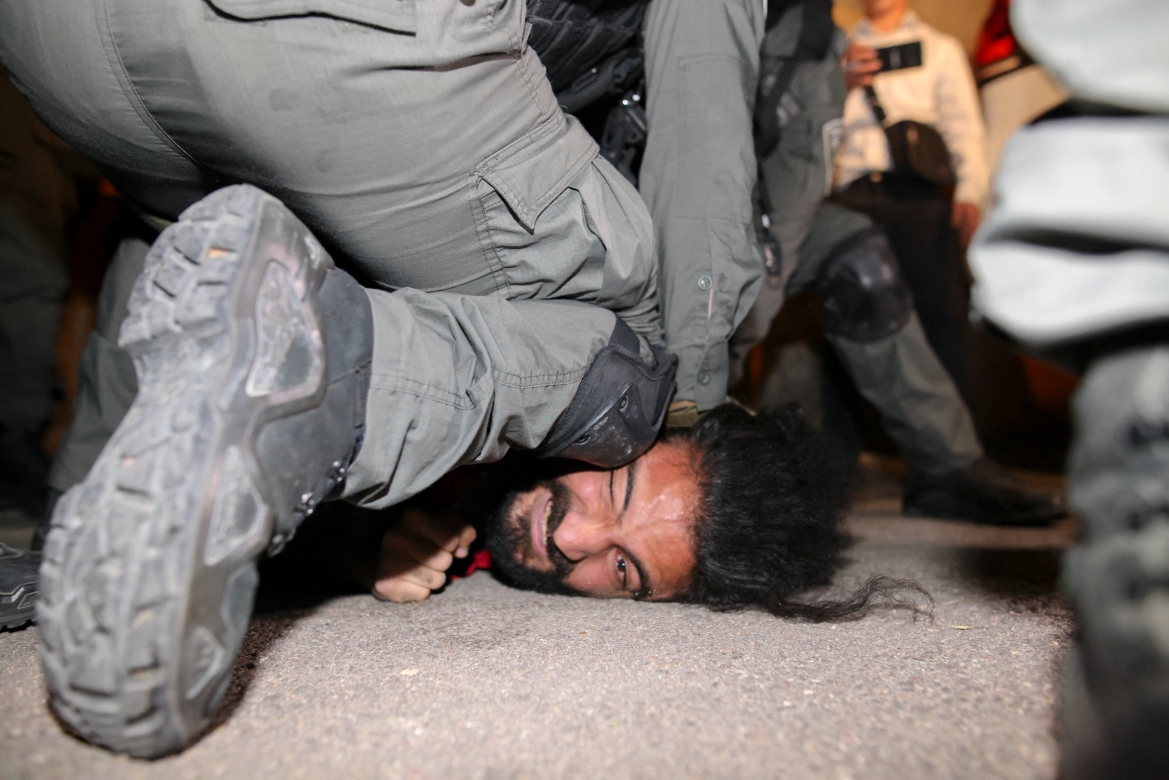 Mainstream written media outlets, meanwhile, relied on a veneer of objectivity and neutrality to depict the ongoing violence as a two-sided ‘clash’ whereupon Palestinians and Israelis were equally culpable despite the fact that the overwhelming majority of those injured were Palestinians. Televised media has largely focused on Hamas’ use of ballistic rockets as the starting point to frame all other news developments around.

The core political project of the settlers, the state, and its soldiers, remain fundamentally unchallenged by the mainstream media narrative. In fact, the political agenda of the state remains popular and uncontroversial enough to receive the backing of local U.S. politicians, including those running for Mayor of New York City.

I'm standing with the people of Israel who are coming under bombardment attacks, and condemn the Hamas terrorists. The people of NYC will always stand with our brothers and sisters in Israel who face down terrorism and persevere.

Andrew Yang, a top contender for the mayoral position, tweeted: “I'm standing with the people of Israel who are coming under bombardment attacks, and condemn the Hamas terrorists. The people of NYC will always stand with our brothers and sisters in Israel who face down terrorism and persevere.”

As the displacement of Palestinians in Sheikh Jarrah and other neighborhoods around the Occupied West Bank continue, these core dynamics will continue to play out: settlers and bureaucrats behind the scenes seizing and displacing Palestinians from their homes, Palestinians resisting this through whatever limited means they have access to before being violently repressed by the military, who stand guard around the settlers.

International media coverage is then likely to depict the Palestinian response as the political rupture and thus the natural starting point for the news, leaving the decades-long agenda of the demographic replacement of Palestinians with Israelis unchecked.

But as this current spectacle of Sheikh Jarrah-related protests shows, the power of Palestinian-directed social media content, including videos on the ground of their protests, has begun to shift the power balance slightly.

Israel’s Prime Minister Benjamin Netanyahu, alluded to the growing power of these Palestinian activists who are followed widely on social media when he defensively stated in a speech that Israel “will not fall into the traps of our enemies and we are not beholden to the keyboards of Twitter users.” At the same time, Netanyahu reportedly ordered a pro-settler march to be re-routed so that it avoids the Muslim Quarter in Jerusalem, prompting its organizers to cancel it.

The faces of Palestinian activists, whose pain is obvious, whose DMs are open and whose contact information is widely available, are starting to take a prominent place in this political struggle.