Published June 15th, 2021 - 08:33 GMT
A young Rohingya refugee looks for his belongings amid the charred remains of his camp following a fire incident that broke out earlier today in New Delhi on June 13, 2021. Money SHARMA / AFP

Human Rights Watch (HRW) demands an investigation into the United Nations' data collection on Rohingya Muslim refugees in Bangladesh, saying the UN refugee agency has "improperly" shared the information with authorities in Myanmar. 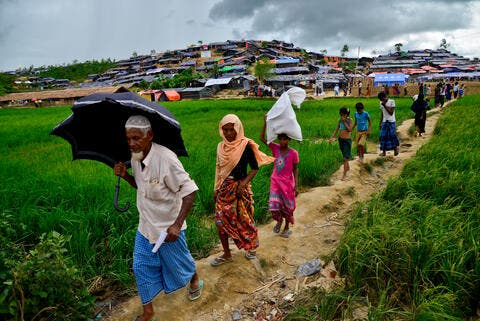 The UN Nations refugee agency, UNHCR, has registered hundreds of thousands of Rohingya refugees in Bangladeshi camps over the past three years.

The data, passed on to the Bangladeshi government, enabled Dhaka to provide the refugees with identity cards needed to access essential aid and services.

However, a new HRW report says the refugees were generally not made aware that the data they were providing would also be passed on to Myanmar, the country they fled and is now under military rule.

“For example, a group of Latin American countries plus Canada known as the Lima Group spearheaded the defense of human rights in Venezuela. The Organization of Islamic Cooperation played a central role in defending the rights of Rohingya Muslims facing persecution in Myanmar.”

The UN agency, however, insisted its staff asked Rohingya for permission to share their data for repatriation eligibility assessments.

UNHCR spokesman Andrej Mahecic said the agency has "clear policies in place to ensure the safeguarding of the data we collect when registering refugees all over the world.”

This data collection, according to HRW's crisis and conflict director, exposed the Rohingya to further risks.

“The UN refugee agency's data collection practices with Rohingya in Bangladesh were contrary to the agency's own policies and exposed refugees to further risk," Lama Fakih said in a statement.

This includes about 750,000 Rohingya Muslims, who were forced to leave their homeland amid the military-led crackdown against their community in 2017.

Thousands were killed, raped, tortured, or arrested in the crackdown, perpetrated with “genocidal intent,” according to the United Nations, which has described the community as the most persecuted minority in the world.

Regarding the data collection, senior HRW researcher Belkis Wille also said, “What became very quickly clear to us is that Rohingya we were speaking to had not been asked for informed consent.”

She said that Dhaka had submitted data on at least 830,000 Rohingya to Myanmar.

“It is hard to imagine that every single one would have agreed,” she said, warning that, “Now Myanmar authorities know that they're sitting in Bangladesh, so if the situation changes, that risk has been opened up effectively.”

Myanmar has meanwhile used the data to reportedly designate some 42,000 Rohingya for return.

Those include 21 refugees interviewed by HRW, who all said they only learned their data had been shared when they were informed that they had been approved to return to Myanmar.

Myanmar does not recognize the Rohingya as citizens.

The government of de facto leader, Aung San Suu Kyi, which was ousted by the military in a coup on February 1, had avoided even using the term Rohingya, instead referring to the minority ethnic group as “Muslims in Rakhine state.”

Now, Myanmar's so-called National Unity Government (NUG), which includes many politicians from her party, is calling on the Rohingya to join hands to fight the junta in return for citizenship.

The NUG said it was committed to repatriating all Rohingya refugees in Bangladesh "as soon as repatriation can be accomplished voluntarily, safely and with dignity."

The shadow government, which seeks international recognition, has faced questions over whether it will recognize the citizenship and rights of the Muslim minority group in Myanmar.

On Sunday, anti-coup protesters flooded Myanmar's social media with pictures of themselves wearing black in a show of solidarity with the Rohingya.

"Justice must (be) served for each of you and each of us in Myanmar," said prominent rights activist Thinzar Shunlei Yi on Twitter.

The online campaign was the first such effort in Myanmar with a public largely unsympathetic to the Rohingya's plight.

In a related development, Myanmar’s ambassador to the United Nations, who has refused to leave his post despite being fired by the junta, has called for “effective collective measures” against the military.

In a letter to the world body, Kyaw Moe Tun wrote, “It is most urgent that the international community take effective collective measures to prevent any possible crimes against humanity from happening and the emergence of a potential regional humanitarian crisis.”

“Strong, decisive and unified measures are imperative and needed immediately,” he wrote.

Since the military coup, daily protests have been held in the country, demanding the restoration of civilian rule and the release of Suu Kyi and her associates.

The mass demonstrations have been met with a ruthless military crackdown that has killed over 850 people.

Kyaw Moe Tun, still considered as the rightful envoy by the UN, warned the international community that inaction “will further encourage the military to continue committing inhumane and brutal acts against civilians and will result in the further loss of lives of innocent civilians in Myanmar.”

His letter came ahead of UN Security Council talks on the situation in Myanmar.

Trial of Suu Kyi gets underway

In the meantime, the junta kicked off the trial of the ousted leader, Suu Kyi, amid tight security measures more than four months after her arrest.

Suu Kyi faces a raft of charges ranging from improperly importing walkie-talkies to breaking a colonial-era secrecy law and flouting coronavirus restrictions during last year's elections that her National League for Democracy won in a landslide.

The 75-year-old faces more than a decade in prison if she is found guilty on all charges.

Suu Kyi, who appeared unwell, "paid keen attention" throughout the hearing, according to another member of her legal team, Khin Maung Zaw.

Myanmar #Rights2020: A UN-mandated Fact-Finding Mission found sufficient evidence to call for the investigation of senior military officials for crimes against humanity and genocide against ethnic Rohingya Muslims. https://t.co/Wx24I0rs0S pic.twitter.com/OiGR6CKpYv

"I'm confident Daw Aung San Suu Kyi will overcome this trial," he said. "And she seems quite determined to assert her rights, whatever the results."

Suu Kyi's lawyers said they expect the trial to wrap up by July 26.

Coordinator of the Alternative ASEAN Network on Burma, Debbie Stothard, described the trial as “a show trial motivated only by political reasons.” 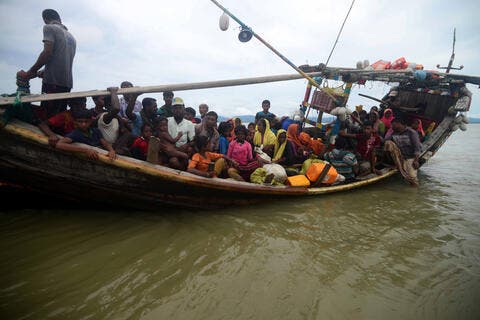 Stothard said the junta chief, Min Aung Hlaing, is “determined to lock up Suu Kyi for the rest of her life. If he could, he would probably charge her under every law available."

Suu Kyi was held under house arrest for almost 15 years during previous military rule before her release in 2010.