Published May 3rd, 2021 - 08:21 GMT
India has so far reported more than 11.5 million cases of coronavirus infection, the world’s third-highest total after the US and Brazil. (AFP)

The coronavirus pandemic is escalating in India with half the world's cases, including 800,000 over two days, and more than one-quarter of the deaths but only 5% of the residents vaccinated and medical resources in short supply. 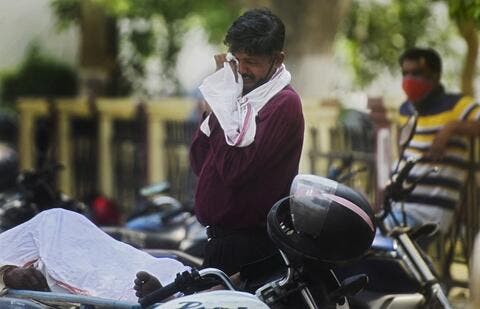 Numerous states in India have placed under lockdowns, including capital New Delhi's union territory through May. 10. And several nations, including the United States and neighboring Nepal, are instituting travel bans from the country.

And the cases may be a fraction of the total infected because testing is not that widespread.

thinking of and praying for our brothers and sisters in India ❤️ here’s a link to organizations you can donate to if you feel moved to do so. https://t.co/iPv5hHi5Vj

"A nationwide lockdown rather than what we are doing now, in bits and pieces across states, because of the simple fact that it is spreading all over," a member of the nation's coronavirus task force said in a report by the Indian Express. "We are looking at the wrong end of tunnel.

"Healthcare infrastructure cannot expand indefinitely, oxygen supplies have been ramped up but still there is shortage given the case load. It's clear that we have to decrease the cases. It is a human-to-human spread. For at least two weeks, if we are able to stop that, we will decrease the case load. That will help decrease mortality, give some relief to health infrastructure and cut the cycle of transmission," a member said.

Australian Cricket will throw its support behind the India COVID-19 Crisis Appeal by partnering with the @ACA_Players and @unicefaustralia to raise much needed funds.

Throughout much of the world, the pandemic has been subsiding with more than 1.5 billion shots administered, according to tracking by Bloomberg. In India, just 2.1% of the population has been fully vaccinated and there are enough doses for 5.7% of the population.

But India is a prime producer of vaccines, exporting 66 million doses.

Among the world leaders in fatalities, the United States has administered at least one dose to 44.4% of its population with Brazil at 15%, according to tracking by Bloomberg. Britain, which inoculated the first person in the world in December, is among the best in the world with 51.4%.

India is administering the Oxford-AstraZeneca vaccine, also known as Covishield, and its homegrown Johnson, both based in the United States, as well as AstraZeneca in Britain.

The covid-19 crisis in India is a massive setback for the entire world.

India needs the global community’s support to survive this crisis.

On Saturday, India opened vaccines to everyone 18 and older. But multiple states have said they are short on supply. At the start of this year, India had hoped to fully vaccinate 300 million people by August. The government has purchased at least 205.5 million doses, according to data from the Duke Global Health Innovation Center, with India in the top 10.

Israel, which is considered part of Asia, has fully vaccinated 59.7% of its population, among the best in the world. Its death toll is 6,366, rising by 14 in one week, including three on Sunday.

Raw materials are in short supply in India with the United States and other nations promising to send materials.

Oxygen, hospital beds and personal protective equipment are also scarce throughout the nation including the capital state of Delhi, which is home to 19 million residents.

"There is a major issue of oxygen," Delhi Chief Minister Arvind Kejriwal told ANI on Sunday. "Delhi requires 976 tons of oxygen daily but we have been allotted only 490 tons of oxygen. Yesterday we received only 312 tons. How will this work?"

A plane carrying the first shipment of medical aid from France to India departed from Paris on Saturday.

"There is only one solution to fight the virus: solidarity and cooperation," Jean-Baptiste Lemoyne, a junior minister in the French Foreign Ministry, told journalists Saturday as medical equipment was being loaded onto a plane.

Britain will help India with "whatever we can, whatever they ask for," including vaccines, Foreign Secretary Dominic Raab said Sunday on Sky News and the BBC.

COVID-19 originated in Mainland China, but the nation has reported only a few deaths in the past 12 months and stands in 58th at 4,636 behind Ireland with 4,906. China added 15 cases Sunday.

Turkey, which ranks 19th, reported 373 deaths Saturday and 340 Sunday for a total of 40,844. On Thursday, the nation entered its first national lockdown.

Japan has vaccinated only 2% of the population with at least one dose.

Less than three months before the Summer Olympics, the nation has announced emergency measures in Tokyo and three other areas that took effect one Sunday ago. Bars, department stores and theaters across Japan will remain closed for 17 days.

Brazil's congress has launched a parliamentary inquiry into President Jair Bolsonaro's response to the pandemic. Bolsonaro, who has downplayed the pandemic and has refused to be vaccinated, called the inquiry the "death committee." He contracted the virus last summer.

"Eighty-six percent of Brazilians know someone or have a relative who has died -- we've never seen anything like this in Brazilian history," Amazonian senator Omar Aziz said after being elected the inquiry's president on Tuesday.

Deaths have been surging in Colombia with 485 Saturday that followed a record 495 Saturday, which was the fourth-highest in the world. On Thursday, Argentina set a record with 561 before 231 Saturday for 64,094 in 14th.

Chile, which ranks 23rd in the world with 26,561, including 104 Sunday, leads South America in vaccination percentage with 42.6% of its 19.3 million population receiving at least one shot.

On Saturday, several thousand revelers descended on Liverpool for Britain's first legal rave in more than one year. It's a pilot event, called The First Dance, with no social distancing or masks required.

Britain is planning a study of 40,000 people who been exposed to coronavirus rather than a mandatory 10-day quarantine.

France also is easing out of a lockdown that began April 3. On Monday, residents can travel cross country. Bars and restaurants as well as cultural sites and non-essential shops will be allowed to reopen to customers on May 19. On June 30, all curfews will be lifted though nightclubs will remain closed.

Italy also has eased restrictions, including allowing outdoor dining for lunch and reopening schools. More than half of Italy's 20 regions are in the more lenient "yellow zone," instead of orange and red.

Germany has been in a lockdown since November with parliament passing a law giving the federal government more powers to impose pandemic restrictions based on data.

All regions in Spain, except Madrid, the Canary Islands and the Balearic Islands, are still subject to a perimeter lockdown and curfews through May 9 from six months ago.

In Brussels, Belgium, authorities fired water cannons and tear gas to disperse crowds of mainly young people at a party in a park in protest of restrictions on Saturday.

In North America, the nonessential travel ban among Mexico, Canada and the United States has been extended through May 21. It began one year ago in March.

Mexico was the first Latin American nation to begin administering vaccinations, but the rate is low at 9.7% for at least one dose.

Canada's rate is 29.7%, which is 14 percentage points below its neighbor to the south.

Mexico reported 261 deaths Saturday with the single-day record 1,803. Cases were 3,025 for a total of 2,347,780, which ranks 15th. Mexico has reported diminished hospitalizations with only 12% being used including 17% with ventilators.

Unlike the United States, Canada has not given federal guidance on what residents can do after being vaccinated. Health Minister Patty Hajdu said domestic vaccine passports are being considered.

How to Help India Amid the Covid Crisis https://t.co/hsKSfgI9b8

Australia has vaccines available for 4.4% of the population with dosage administration not available. New Zealand has administered first doses to 3.5% of its population. 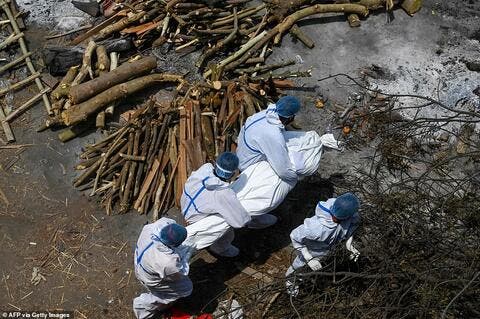 South Africa, which is dealing with a variant, has vaccinated 0.5% of its population with its first dose.

Among continents, Africa has the slowest rate of vaccinations at 1.3%, according to tracking by The New York Times. North America leads with 47%, followed by Europe at 30%, South America at 18%, Asia at 12% and Oceania at 5.8%.