Indian Floods Wash Away The Bodies of Covid Victims!

Published June 29th, 2021 - 12:06 GMT
The risen water level of the Ganges River washes away the sparse layer of the soil revealing the shallow graves of suspected Covid-19 coronavirus deaths and other fatalities wrapped in cloth at the Phaphamau ghat near a cremation ground in Allahabad on June 27, 2021. SANJAY KANOJIA / AFP

Monsoon flooding has revealed the shallow graves of suspected Covid-19 victims as bodies have floated along the Ganges following fears India's death toll is much higher than the 396,000 reported. 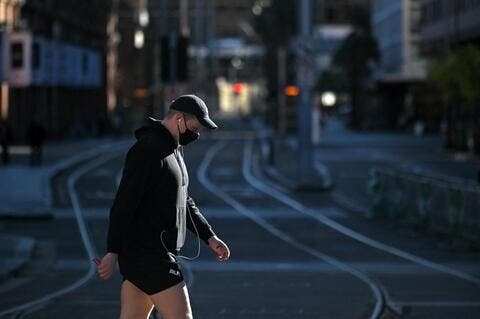 The start of seasonal monsoon flooding has caused strong currents to surge through the 1,550-mile long waterway, dislodging some of the bodies buried in shallow sand graves along its banks.

Bodies, which are believed to be fatalities from Covid-19, shrouded in saffron cloth have been seen floating down the Ganges river at the Phaphamau ghat near a cremation ground in Allahabad, Uttar Pradesh.

“My religion has the custom of burning the dead body and not burying it but it was my poor economic situation due to which I had to perform the burial."

How poverty and stigma are behind the dead bodies floating in India’s Ganges river https://t.co/WlGdz7GzPQ pic.twitter.com/aJ3jK2KKHB

It comes as experts warned that India's death toll could be closer to two million compared to the 396,730 fatalities officially recorded from the virus.

Families in India's north and east buried the bodies of their loved ones in graves along the Ganges as they were unable to afford the cost of funeral pyres at the height of the Covid outbreak in April and May.

The grim scenes along the Ganges river first started in May as India's ferocious coronavirus wave overwhelmed hospitals and crematoriums.

Officials in Allahabad - one of Hinduism's holiest cities, where millions visit to perform funeral rites - say almost 150 bodies that floated up in the past three weeks have been cremated.

Funeral pyres sit on riverside embankments beside piles of wood, waiting for new bodies to be retrieved from the waters and cremated.

There were also dozens of corpses partially submerged in the river in surrounding areas, according to AFP.

Officials have estimated that up to 600 bodies were buried along the Ganges in Allahabad during the height of the country's Covid crisis.

But locals believe that is just a fraction of the real figures and fear that more could be dislodged from the sandy banks by rapid waters in the coming weeks.

Sonu Chandel, a boatman who works with a riverside crematorium, said he was shaken by the sight of families burying their dead two months ago.

He said a sense of uneasiness returned to him as the waters rose to cover the banks, adding: 'It was really sad to see poor people burying their loved ones in an undignified manner, but the rising water level has made it worse.

'There is always the fear of (a body) hitting the oar or (my boat) running over a dead body as the water level goes up.'

Other major religious centres in northern India, such as the religious hub of Varanasi further downstream, have experienced similar problems.

Locals fear the corpses, if not removed, risk further contaminating what is already one of the world's most polluted waterways.

'This... could cause dangerous diseases,' Dipin Kumar, who lives near the Ganges in Allahabad, said.

'The government must think this over and only they can make a plan.'

The holiest river in India, the 'Mother Ganga', like other water bodies in India is worshipped as a goddess by Hindus and viewed as the giver and taker of life.

Pilgrims flock to the Ganges to ritualistically bathe, and even before the pandemic, millions of Hindus cremated their dead along its banks before scattering the ashes in the river.

Some who could not afford wood or other materials for funeral rites would submerge the bodies of their loved ones instead, while others conducted water burials as part of their religious traditions.

A journalist in Kanpur told the BBC last month that this practice happens in non-pandemic times but villagers have never seen so many bodies wash up in such a short space of time.

Locals said funerals, which can cost more than 7,000 rupees ($100), were adding to the hardships of those already struggling to make ends meet in the pandemic-stricken economy.

As Covid 19 devastates rural India with bodies floating over the Ganges, Modi & his ministers focus on covering up their incompetence. They create a fictitious toolkit to discredit journalists and critics. My latest for the Washington Post #TwitterIndia https://t.co/USoKT0vHZJ

Police and state disaster teams are patrolling the river looking for bodies and officials have stationed two boats along the banks to retrieve the corpses, sometimes with help from local fishermen, but have had little success in recent days.

'The flow is very fast and it is a challenge to fish out bodies now,' a police officer said.

Shallow graves and human mounds have been found lining the embankment all along the Ganges, in villages including Kanpur, Kannauj, Unnao, Prayagraj and Mahadevi ghat.

The country of 1.4billion has officially recorded 30.28million Covid infections and 396,730 fatalities from the virus, but there are concerns that the country's true coronavirus death toll could be closer to two million.

Scientists at the University of Washington's Institute for Health Metrics and Evaluation have said that India could only be detecting between 3 and 5 per cent of cases due to insufficient testing.

Murad Banaji, a mathematician at the Middlesex University estimates the country's real death toll could be around five times the reported figure.

According to the Wall Street Journal, Mr Banaji based the estimation partly on mortality and serosurvey data, which shows the presence of antibodies in the population.

These new estimates echo research carried out by the New York Times last month which said the real death toll could be closer to 1.6million.

In consulting with more than a dozen experts, the Times found it difficult to get a clear picture even of the total number of infections in India due to poor record-keeping and a lack of widespread testing.

Experts have said the undercounting could be due to insufficient testing, hospitals being overwhelmed and lack of access to healthcare in rural parts of the country.

This could mean that many deaths with coronavirus are taking place at home, particularly in rural areas - and are therefore omitted from the count.

The system for keeping death records in India is also unreliable, with just four out of five deaths not medically investigated pre-pandemic.

Dr Banaji has previously said that it is likely that underreporting varies from state to state.

He told the Hindu Times last week: 'Even within States, it is probably different in urban and rural areas.

'Many of the estimates are based on 2020 data. It's too early to know whether underreporting has been higher during this wave, but as more data comes in, this will become clearer.

'It may be that the speed of the surge meant that fewer of the deceased were tested, fewer received hospital care, and more died at home. All of these factors would tend to increase underreporting.'

The country was also the first nation to detect the Delta variant which is now driving a spike in cases in the UK.

India has seen a steady fall in its Covid-19 infection numbers in June and many states and cities have made steps towards re-opening fully, though the number of people vaccinated as a share of the overall population remains low. 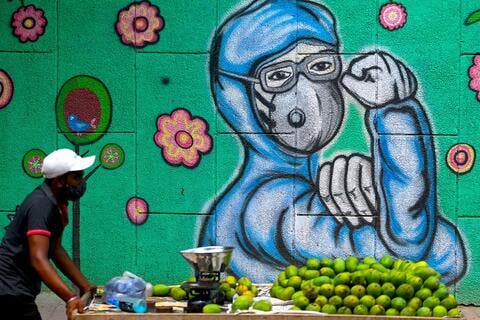 Experts have raised concerns that re-opening too quickly could once again risk recent gains made in fighting the serious wave of coronavirus in the country.

India also successfully vaccinated up to eight million people a day in the last week, as the government has picked up the pace and announced plans to vaccinate all adults by the end of the year.