India's Covid death toll could be ten times higher than is being officially reported, according to analysis of the numbers being burned in crematoriums. 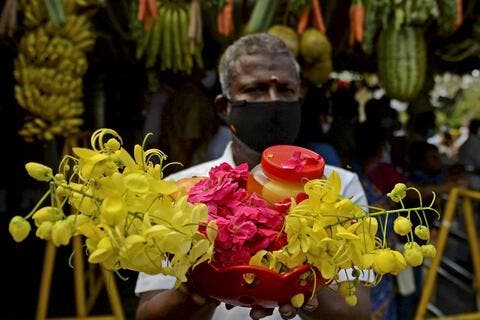 Another 314,835 infections were reported on Thursday, the world record for a daily cases figure, while the health ministry said there were 2,074 fatalities.

India's health infrastructure has been brought to its knees by a second wave which is three times higher than the first, with medics pointing to a new variant believed to be more infectious.

315,000 coronavirus cases were reported in India today, the biggest one-day increase for any country since the pandemic began https://t.co/z7D0c3nju6 pic.twitter.com/cHSZrliz8w

At the start of the year, India thought it had beaten the pandemic and had kicked off a mass vaccination drive. Face masks and social distancing were cast aside and huge crowds flocked to religious festivals, election rallies and cricket matches.

But now cities are on lockdown again, anti-viral drugs like redesivir are being sold on a flourishing black market and oxygen cylinders are being looted, with tankers given armed escorts to transport supplies.

While India's infections have risen higher than any other country in the world, their deaths have remained conspicuously low.

Local news reports from the states of Gujarat, Uttar Pradesh, Madhya Pradesh and Bihar reveal that while at least 1,833 people died of coronavirus recently, based on the number of cremations, just 228 have been officially tallied.

This analysis, by the Financial Times, revealed that in the Jamnagar province of Gujarat, 100 Covid victims had burned on funeral pyres - but just one coronavirus death was recorded officially.

Delhi, a city of 29 million, has less than 100 beds available for patients requiring ventilators and fewer than 150 for those in need of intensive care.

Major private and government-run hospitals in the capital have sent out urgent appeals to the central government, calling for immediate supply of oxygen for hundreds of patients on ventilator support.

On Wednesday, nearly 500 tonnes of oxygen was supplied to Delhi but this fell short of the required 700 tonnes per day.

Similar chaos is unfolding across the country, with desperate people taking to social media to beg for beds, oxygen or medication.

In the eastern city of Patna, Pranay Punj described how he ran frantically from one pharmacy to another in search of the antiviral medication remdesivir for his seriously ill mother.

He finally located a pharmacist who said the drug could only be found on the black market, and offered to source it for an eye-watering 100,000 rupees (£1,000), more than 30 times its usual price.

He instead got the medicine from a relative whose wife had just died of the virus, but later that night received a call from the hospital informing him they were out of oxygen.

'Several hours later, we managed to procure one bed at (a) very high price in a private hospital and moved her there,' he said.

Despite India's status as the 'pharmacy of the world', the biggest producer of generic drugs has been unable to meet the demand for antiviral medication such as remdesivir and favipiravir.

In the northern city of Lucknow, Ahmed Abbas was charged 45,000 rupees for a 46-litre oxygen cylinder, nine times its normal price.

'They asked me to pay in advance and pick it (up) from them the next day,' the 34-year-old said.

The crisis has added to criticism of Prime Minister Narendra Modi, already under fire for allowing huge religious gatherings and addressing crowded political rallies himself.

'Patients should only be given as much oxygen as they need,' Goyal told reporters.

Delhi is now planning to import 50,000 tonnes of oxygen and has set up a special train service called the 'Oxygen Express' to transport cylinders to hard-hit states.

Modi said in an address to the nation on Tuesday night that 'all efforts are being made' to boost supplies.

'One solution to this crisis was to create a stockpile of antiviral drugs when cases were low, but that did not happen,' said Raman Gaikwad, an infectious diseases specialist at Sahyadri Hospital in the western city of Pune.

Instead, remdesivir manufacturers told the Indian Express this week that government officials had ordered them to cease production in January because of a fall in infections.

With requests for beds and supplies reaching fever pitch on social media platforms, a network of activists and influencers has sprung into action to help those in trouble.

Journalist Vinay Srivastava died today while live-tweeting for help. Hospitals in India are struggling to cope with a growing wave of coronavirus pic.twitter.com/rAQrXykgMH

Climate activist Disha Ravi and YouTuber Kusha Kapila are among the dozens of young Indians who have sourced, compiled and shared information detailing the real-time availability of hospital beds, local helplines, pharmacy numbers and even food delivery services.

Unpaid, she works late into the night, editing and verifying details of where to get what and amplifying requests for help.

But the lists she shares with her 684,000 Instagram followers becomes obsolete almost immediately as beds fill up and pharmacies sell out.

'I am not always successful, I am sure there are lapses... but hopefully it is helping people at least on an individual level', she said.

With cases rising at a record pace, India's government is leaving its healthcare workers and anxious citizens to pick up the pieces.

'My friend is desperate... we have been trying for all the government helplines but none of them are responding (and) most of the oxygen suppliers have switched off their phones', said Zain Zaidi, sales manager at a Lucknow hotel.

'I just managed to find one supplier but he is charging 20,000 rupees. I have to buy it at any cost', the 34-year-old told AFP in a panicked voice, disconnecting the call.

States across India have imposed restrictions, with Delhi in a week-long lockdown, all non-essential shops shut in Maharashtra, and Uttar Pradesh set for a weekend shutdown.

The United States now advises against travelling to India, even for those fully vaccinated, while Britain has added India to its 'red list'. Hong Kong and New Zealand have banned flights. 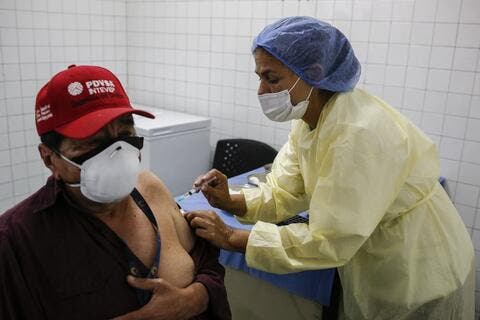 India's inoculation programme has also hit supply hurdles, prompting New Delhi to put the brakes on exports of the AstraZeneca shot, which is manufactured locally by the Serum Institute.

India has administered more than 130 million shots so far and from May 1 all adults will be eligible for a jab.