Iran's Revival of the 2015 Nuclear Deal is Within Reach

Published March 28th, 2022 - 10:07 GMT
After months of stalemate, progress has been made in recent weeks to revive the 2015 agreement that was supposed to prevent Iran from acquiring an atomic bomb, a goal it has always denied pursuing. (Photo by ALEX HALADA / AFP)

Iran’s chief nuclear negotiator Ali Bagheri Kani told the European Union’s Enrique Mora on Sunday that the revival of the 2015 nuclear deal is within reach if the United States shows pragmatism. 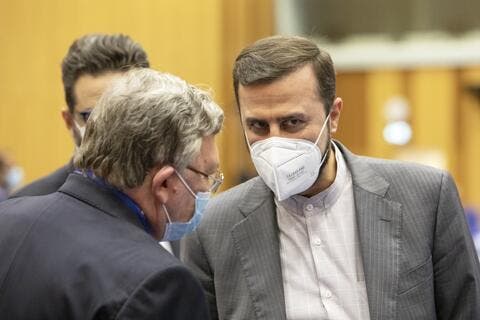 What Does a Strong Nuclear Deal For Iran Mean?

In the which took place talks in Tehran, Mora, the coordinator of the nuclear talks between Iran and the major powers, and Bagheri Kani exchanged views on the remaining issues to restore the nuclear deal, officially known as the Joint Comprehensive Plan of Action.

US tries to calm Israel and Arab allies ahead of possible Iran nuclear deal https://t.co/WulRpg24n3

“If the American side be pragmatic, it is possible to reach agreement,” remarked Bagheri Kani, the deputy Iranian foreign minister for political affairs.

Mora presented a report about his latest talks with other partners in the nuclear talks, which includes the European trio (France, Germany and Britain), Russia, China, and the United States.

According to the Foreign Ministry, Bagheri Kani and Mora will continue close contacts in the future days.

Mora arrived in Tehran late on Saturday for talks with Bagheri Kani on Sunday. Before his arrival, Mora said efforts should be made to try to close “the remaining gaps” in the Vienna talks aimed at reviving the JCPOA.

“We must conclude this negotiation. Much is at stake,” Mora wrote on Twitter.

Reportedly, the EU coordinator for the nuclear talks plans to fly to the U.S. for talks with American officials.

The talks to revive the JCPOA started in April last year in Vienna. It seems that the main stumbling block for revitalizing the 2015 nuclear deal is the U.S. refusal to lift sanctions on Iran’s Islamic Revolution Guards Corps (IRGC) and remove its name from the list of terrorist organizations.

Kamal Kharrazi, chairman of the Iranian Strategic Council on Foreign Relations (SCFR), told the Doha Forum on Saturday that the United States must remove the name of the IRGC form list of terrorist organizations.

Kharrazi, who was foreign minister from 1997-2005, added this is not the only problem because more than 500 Iranian institutions and individuals are under the U.S. sanctions list that some of them have direct effects on relations between Iran and the West.