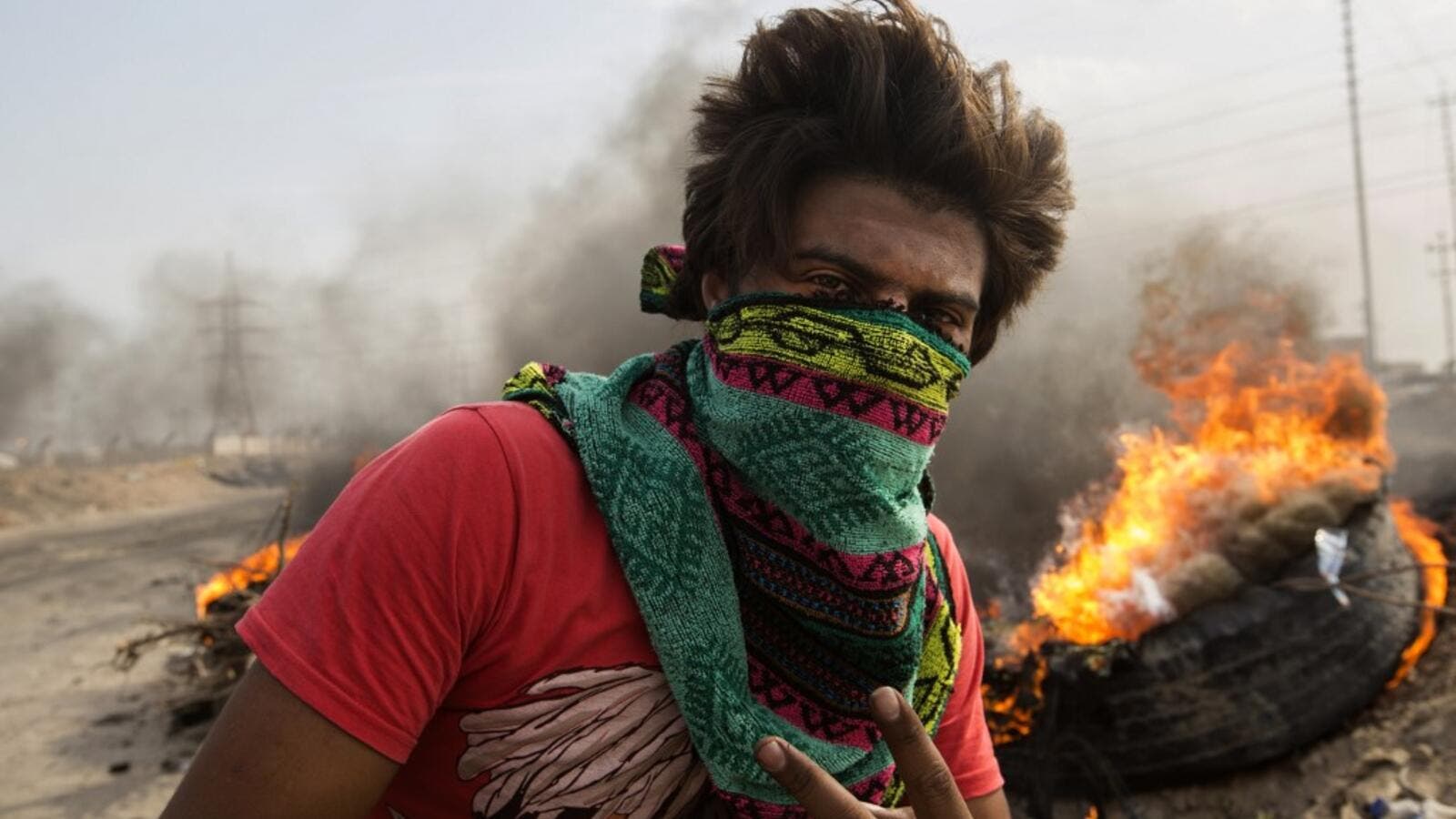 An Iraqi protester walks past burning tires as others block the road to Umm Qasr port during ongoing anti-government demonstrations in southern Iraq on November 7, 2019. A sit-in had cut the road to the Umm Qasr port, which brings in most food and medical imports through Basra, but it reopened later during the day. Hussein FALEH / AFP
Highlights
They also want new election laws, early parliamentary elections, amendments to the constitution, and the appointment of a new members of the Independent High Electoral Commission.

Political parties in Iraq resumed their meetings on Thursday in an attempt to resolve the current crisis and end the public protests.

Meanwhile, the demonstrations continued to paralyze daily life in Baghdad, where bridges have been blocked and government institutions disrupted for more than a week.

The country’s leading political forces have been trying to find ways to break the impasse and appease protesters that are acceptable to all parties.

The demands of the demonstrators include the dismissal of the government, amid accusations that Prime Minister Adel Abdul Mahdi and his allies authorized the use of lethal force in an attempt to suppress the protests when they began last month, leaving more than 300 people dead and 12,000 injured.

They also want new election laws, early parliamentary elections, amendments to the constitution, and the appointment of a new members of the Independent High Electoral Commission.

“There is no gap between the demands of the demonstrators and the initiatives of the political forces,” said Mohammed Al-Sudani, a prominent Shiite politician and former minister, who added that talks were continuing to find compromises that are acceptable to both sides.

“Regarding the dismissal of the government or the prime minister, a legal and official request to question the prime minister has been made by Al-Nassir bloc and others, which is supported by the majority of the parliamentary blocs. This means that we are about to change the government,” he said, adding that the only uncertainty is about the timing and mechanisms for doing so.

“The problem now is that there is no clear leadership among the demonstrators that can negotiate for them, so they must appoint leaders or ask one of the parties they trust to represent them,” said Al-Sudani.

Abdul Mahdi has been trying to calm the protesters’ anger by providing them with job opportunities daily in various ministries, and by speeding up the resolution of financial and administrative corruption cases involving politicians and officials.

On Thursday, the Integrity Commission banned the governor of Babil and the former governor of Basra — both facing corruption charges — from traveling, while the Supreme Judicial Council sentenced in absentia a former bank manager to seven years in prison for wasting public money.

The political system in Iraq has been based on political quotas since 2004. No administrative, ministerial or constitutional amendments can be made without a consensus among the Shiite, Kurdish and Sunni political forces, regardless of the number of parliamentary seats each holds.

Abdul Mahdi’s allies mostly come from Iranian-backed Shiite and Sunni political factions, along with the Kurdistan Democratic Party (KDP), which is led by the influential Masoud Barzani.

The Sunni factions have been the most weakened political force since the areas they controlled were taken over by Daesh in 2014 and then recaptured by Iraqi forces and Shiite factions backed by Iran.

Most of them subsequently joined forces with Shiite factions to become part of the larger Alliance Towards Reform coalition led by influential Shiite cleric Moqtada Al-Sadr, or the Iran-backed Al-Binna’a alliance, both of which joined Abdul Mahdi’s government in Oct. 2018.

Kurdish parties were fragmented after the 2018 parliamentary election as a result of competition between them and political dissent.

The KDP remains the largest and most influential, especially in the autonomous northern Kurdish region, where it controls the regional government, its finances and its share of the federal budget.

The KDP is also the most prominent Kurdish political ally of Al-Binna’a and one of the strongest objectors to the dismissal of Abdul Mahdi, early elections and constitutional amendments.

“Barzani is against any change to Abdul Mahdi’s status or the constitution because he benefits from the current situation,” said a senior Kurdish leader and a governmental adviser.

“Abdul Mahdi gave him facilities he (Barzani) never dreamed of, especially with regard to oil contracts and the region’s share of the annual budget.

“Any alternative to Abdul Mahdi means the application of constitutional and legal articles with respect to the budget, disputed areas, oil contracts and oil exports by the Kurdish region, and this would mean very significant losses for the KDP.”

While keen to find a way to end the current crisis, Iraq’s political factions remain determined to preserve their own interests and keep any individual losses or concessions to a minimum, politicians involved in the ongoing crisis talks told Arab News.

“They will definitely block the dismissal of Abdul Mahdi when voting,” said a prominent Shiite politician. “They (the political coalitions) will introduce a new election law and a new electoral commission and will stall ... before they agree to early elections.

“Maybe they will agree to hold an early election but it should takeplace after a year or so. Already the preparations will need more thanthis amount of time.”