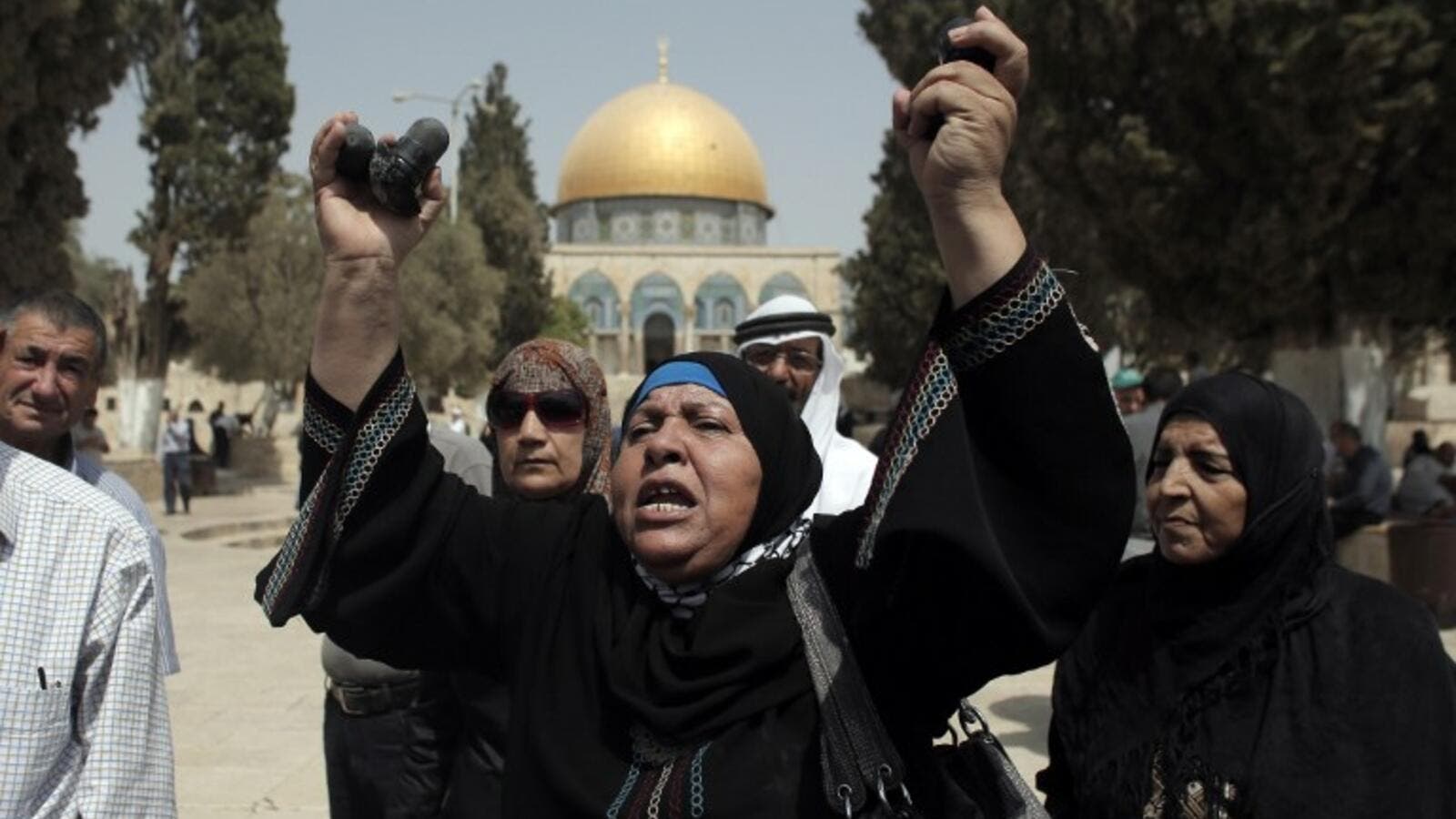 A Palestinian woman shows rubber bullets reportedly used by Israeli riot police outside the Dome of Rock at Al-Aqsa mosque in Jerusalem's Old City after clashes erupted at the compound between Palestinians and Israeli police on September 13, 2015, just hours before the start of the Jewish New Year. (AFP/Ahmad Gharabli)

Muslim nations in the Middle East are letting Israel take control of the Al-Aqsa Mosque by not stepping up to defend the holy Islamic institution, according to Palestinians who spoke with Al Bawaba on Tuesday.

“It’s the duty of Muslim countries to help us defend the mosque,” said Imad Muna, the managing director of a bookstore in East Jerusalem just outside the Old City. “Here in Jerusalem, we can conduct small demonstrations. But we don’t have the power that these other countries have.”

The eighth-century mosque, which is the third holiest site in Islam, has been the site of three consecutive days of clashes between Palestinian protesters and Israeli police. Palestinians fear that Israel is trying to gradually take control of the mosque compound, which Jews call the Temple Mount and Muslims call the Noble Sanctuary.

The area is holy to Jews because they believe it was the site of two ancient temples. Muslims believe it is the site where the prophet Muhammad ascended to heaven.

Although there’s been a ban on non-Muslim prayer at the compound for centuries, lately religious Jewish groups have made increased efforts to visit the area, always under heavy Israeli police protection. Tensions have been especially high recently, after Israel’s defense minister banned two Muslim groups from the site on September 8. Those Muslim groups -- the Murabitoun and the Murabitat -- say their mission is to protect the holy site from Jewish attempts to take it over.

“The Israelis are trying to establish a precedent by dividing Al-Aqsa Mosque compound into sections and time segments, so they can give Israeli settlers access to our mosque," Mourabitoun member Abdel Aziz al Abasi told Al Jazeera on Tuesday. "We will never agree to such plan because it is obvious that the Israelis are trying to take it over piecemeal."

Clashes at the compound erupted early Sunday morning when Israeli forces raided the mosque, which they said was a pre-emptive action to “prevent rioting” by Palestinian demonstrators who planned to attack Jewish visitors to the site on Rosh Hashanah (the Jewish New Year). The Israeli officers fired rubber-coated bullets, tear gas and stun grenades at Palestinian protesters. The protesters hurled bricks and shot fireworks back at the police. Police said they found “a number of pipe bombs” that Palestinians allegedly planned to use against Jewish worshipers later that day, Maan News Agency reported.

After police had suppressed the protest on Sunday, over 650 Jews visited the compound, including a right-wing Israeli minister, according to the left-wing Israeli newspaper Haaretz.

Over the next two days, similar clashes occurred between Palestinians and Israeli security forces. Images of wounded Muslim worshipers and Israeli snipers on the mosque’s roof went viral on Twitter. Dozens of Palestinians have been injured, with some hospitalized. Calm appeared to have been restored to the area by Wednesday morning.

Yet Arab nations have done little to support Palestinian efforts to protect the mosque. “They’ve forgotten about us completely,” said Hassan Dana, 19, a student at Al Quds University in Jerusalem. His friend Muhammad Atrash, 22, agreed. “They don’t care about us at all,” said Atrash, who works in an ice cream shop on East Jerusalem’s Salah-e-Din Street.

Jordan has administrative jurisdiction over Muslim holy places in Jerusalem under its 1994 peace treaty with Israel. On Monday, King Abdullah warned Israel that “continued provocations” at Al Aqsa could damage the two countries’ relations. “If this continues to happen...Jordan will have no choice but to take action,” Abdullah said.

But Palestinians say the King’s words are not enough. “Jordan isn’t doing anything to help us,” said Muna, who is 50 years old. “Even though they’re the ones who control these religious sites.”

From other Muslim leaders, there has been little more than stern words. Turkish President Recep Tayyip Erdogan called on the UN to intervene against Israel's "breach" of the mosque’s sanctity.

Some far-right extremists in Israel have gone so far as to call for the mosque to be torn down so a Jewish temple can be built in its place. On a more immediate basis, Palestinians fear that Israel will change the rules currently forbidding Jews to pray at the Noble Sanctuary, and will eventually divide the compound to give Israelis more and more access. However, the Prime Minister has repeatedly stated that he has no intention of changing the Temple Mount’s status quo, much to the frustration of the lobbying right wingers.

“They want to control the mosque, that is their intention,” said Bayan Aburamouz, 20, a university student getting a degree in social work who says her 15-year-old brother is in prison after being arrested recently at the Al Aqsa compound.

But it’s not just Jordan who shoulders responsibility, according to the Palestinian people, for helping to protect the holy site, where Muslims believe the prophet Muhammad ascended to heaven. “The other Muslim countries -- for example Egypt and Turkey -- they don’t seem to care,” said Muna. “And if they don’t care, eventually the mosque will fall down.”