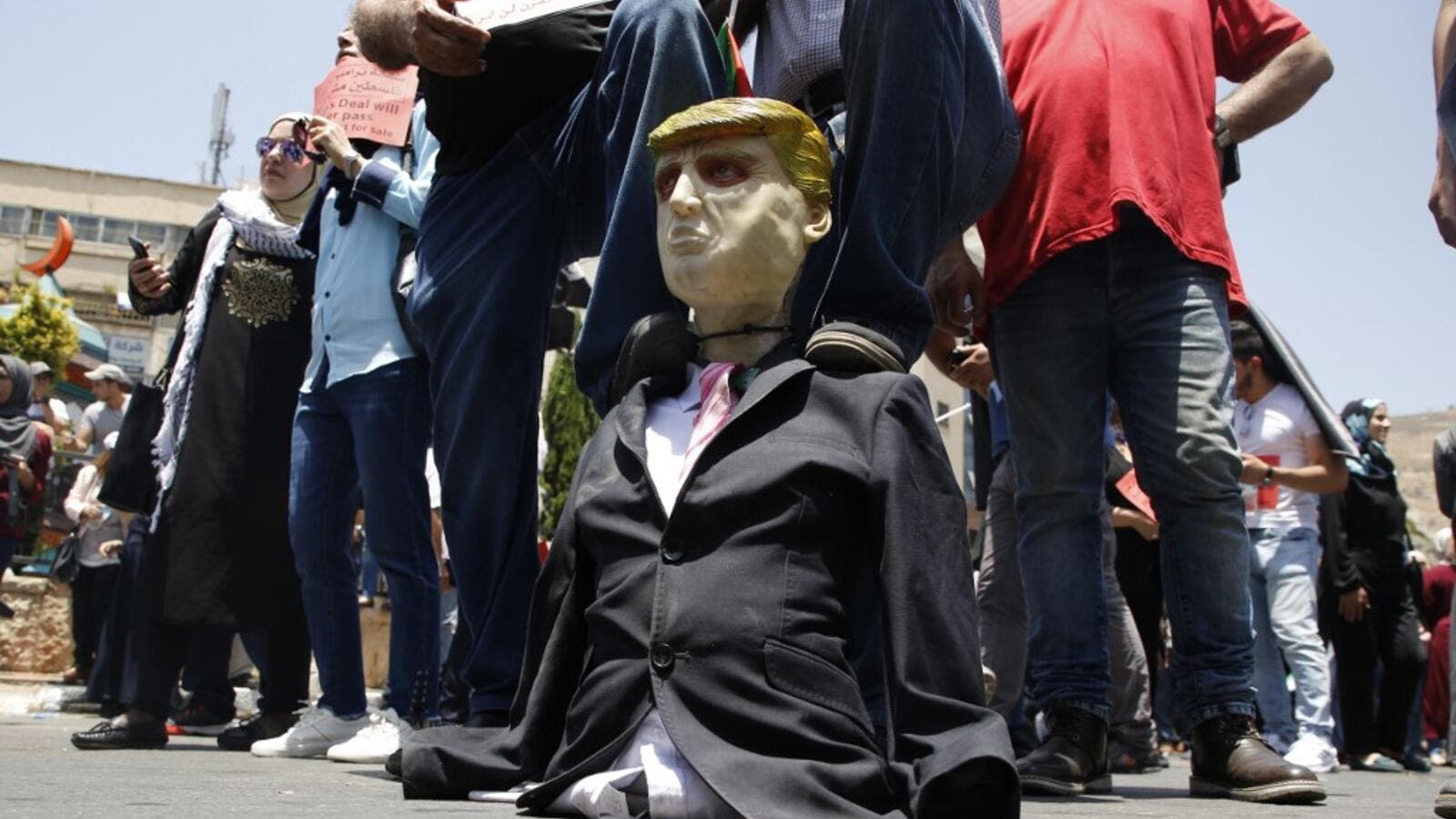 Palestinian demonstrators step on an effigy of US President Donald Trump during a protest against the US-sponsored Middle East economic conference that opens today in Bahrain, in the Israeli-occupied West Bank city of Nablus on June 25, 2019. (AFP/ File Photo)
Highlights
Israeli experts say plan sounds great on paper but is "all form and no substance"under surface.

It is immoral, impractical and could blow up the Middle East, Israeli security experts said Monday on U.S. President Donald Trump's proposed peace plan between Israel and Palestine.

The "deal of the century" has yet to be revealed in full. However, based on leaks in the media, it envisages major concessions to Israel regarding the status of Jerusalem and the right of Palestinian refugees to return to their homes in historical Palestine.

Jerusalem remains at the heart of the decades-long Middle East dispute, with Palestinians hoping that East Jerusalem -- occupied by Israel since 1967 -- might one day serve as the capital of a Palestinian state.

The Ramallah-based Palestinian Authority said they will not be attending the conference in Bahrain and have rejected any U.S. role in the mediating process ever since U.S. President Donald Trump's controversial recognition of Jerusalem as Israel's capital in 2017.

Israeli experts said the plan sounds great on paper but that under the surface it was "all form and no substance".

"Anybody who followed the last 30 years of the Israeli-Palestinian conflict understands that President Donald Trump’s announcement of this first step on the way to a deal is all form and no substance: a new name for the same failed idea known as 'economic peace,' and before that as 'a new Middle East'," said the experts.

Accusing Trump and his son-in-law and senior adviser Jared Kushner, who has reportedly spearheaded the plan, of failing to understand the region's history and the Palestinian struggle, experts said placing economics before core political issues was a "slap in the face to the Palestinians."

They agreed that it would be a "tactical error" to assume Palestinians would willingly accept an economic appeasement plan that involved political tolls such as losing more land to Israeli occupation.

Economic solutions could not prevent the eruption of first and second intifadas in the West Bank, despite being on the agenda of the failed Paris and Oslo peace talks, they said.

"They erupted because the way forward was unclear, and because the Palestinians felt that the economic benefits offered would not lead to the end of the occupation," said experts.

Israeli experts stressed the importance of avoiding the "colossal mistake" of resuming talks "without defining the end goal".

"For both Palestinians and Israelis, that goal should be ending the occupation and establishing a Palestinian state alongside Israel within the 1967 borders, with necessary land swaps," added the experts.

They also said there would be "no Jewish and democratic state without resolving the Palestinian issue."

One thing the experts were not certain about was Trump's intentions with this plan.

"Yet it is not clear whether Trump’s intentions are good or merely seek to do Israeli Prime Minister Benjamin Netanyahu a political favor."