Published April 14th, 2021 - 09:22 GMT
Iranians protest the government in Winter 2017/2018 (AFP/FILE)
One of the most tired and worn-out cliches to be trundled out of the back cupboard every few months by British opinion writers is the comparison of the present day with George Orwell’s dystopian novel, Nineteen Eighty-Four.

The latest in this series comes in the form of an opinion piece in The Guardian, called China v Russia v America: is 2021 the year Orwell’s 1984 comes true? In the article, the author, Simon Tisdall, argues that “2021 is the new 1984”, characterized by “a world divided geographically, politically and militarily into three rival super-states: Oceania (North America plus Britain), Eurasia (Russia and Europe), and Eastasia (China).” Tisdall implies a distinction between Western Europe and the Caucasus and eastern Ukraine, now threatened by a military build-up on the Russian border, but nonetheless subscribes to colonial ideas of “spheres of influence”, an idea that saw European powers carve out portions of the world for economic and military subjugation from the nineteenth century onwards. 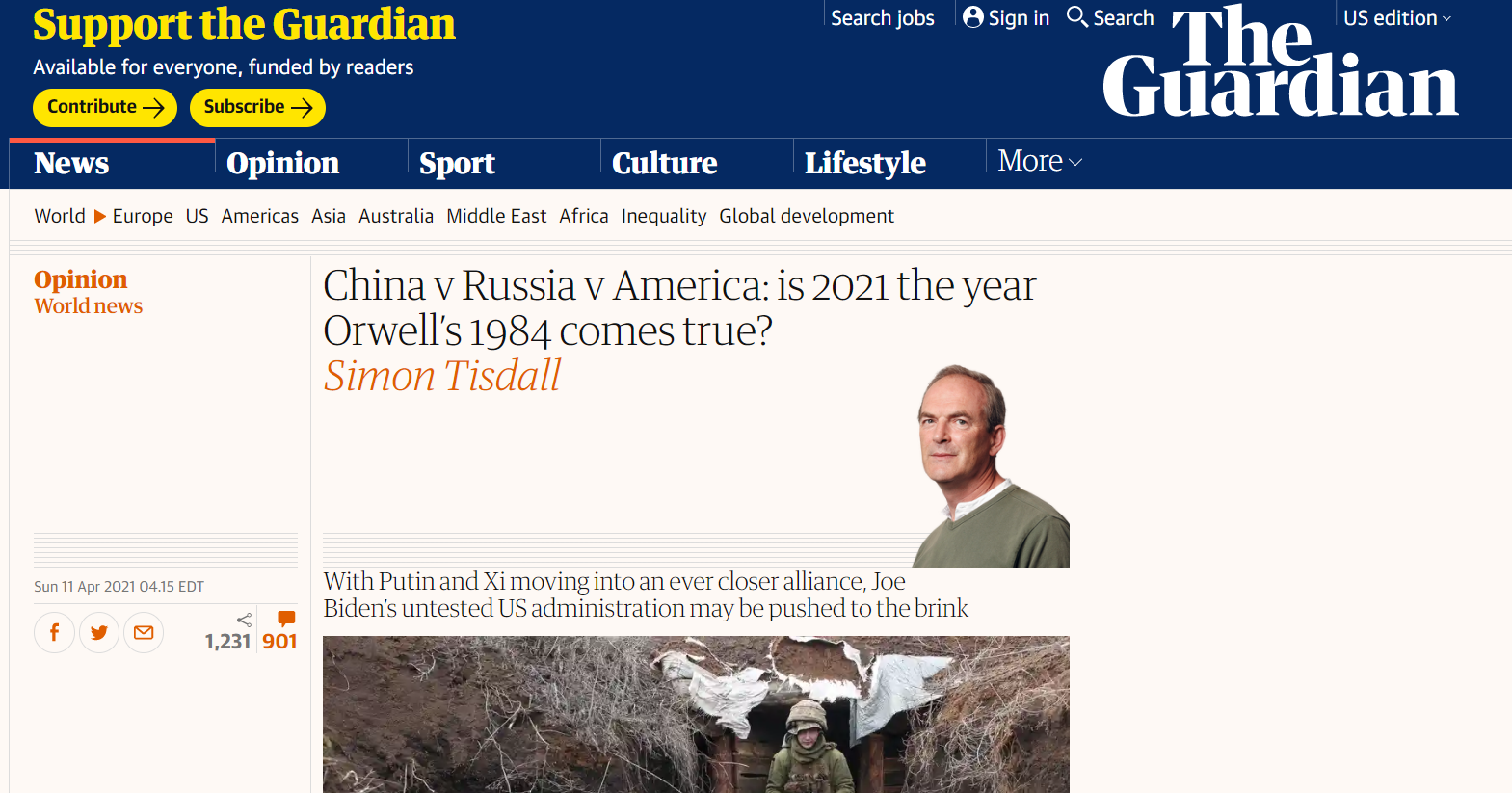 Screenshot of The Guardian's article

Talk of great power rivalries has risen over the past decade. China’s miraculous economic growth (which the World Bank says has risen 850 million people out of poverty since 1978) and aggressive military actions by Russia (most recently in Ukraine) have tended to position the U.S’s place in the world on a three-sided axis against the two other superpowers. As a consequence, the Global South, more often than not struggling under the enormous influence of these powers collectively, has tried to carve out some living-room from which to be relatively free from external influence.

Tisdall’s argument suggests that non-superpower states must subdue to the U.S., China, or Russia in order to maintain political stability. However, the history of the Global South has frequently been one of the strategic relationships across superpowers, rather than subservience to one. As recent historians, such as Matthew Connelly, have shown, states in the “South” were key actors in their own right in determining the global order. Tisdall’s article fails to acknowledge the agency of these so-called “peripheral” actors.

Revolutionary Iran, for example, managed to escape the twin dominations of U.S capitalism and Soviet communism. As Odd Arne Westad wrote in his seminal book, The Global Cold War, in Iran “the Left was soon pushed aside by revolutionaries who found their inspiration in the Holy Koran, the Prophet, and, ultimately, in God.” What resulted was a political system capable of rejecting political and cultural hegemony required under late-twentieth-century imperialism, be it from Washington or Moscow.

Tisdall’s article fails to acknowledge the agency of these so-called “peripheral” actors.

As Ayatollah Khomeini said in a message to pilgrims to Mecca in 1980: “We have turned our backs on the East and the West, on the Soviet Union and America, in order to run our country ourselves. Do we therefore deserve to be attacked by the East and the West? The position we have attained is an historical exception, given the present conditions in the world, but our goal will certainly not be lost if we are to die, martyred and defeated.”

Such a tradition can be seen in the negotiations between Iran and Washington over the reentering of the JCPOA, or Iran nuclear deal. Whilst Iran is under heavy sanctions left behind by the Trump administration, oil has continued to be shipped to China, albeit at a lower price than market value (and to small, non-state refineries). Similarly, Moscow has this week provided a helping hand to appear as a friend in upcoming talks over the deal in Vienna. Simplistically, this is Iran siding with, in Orwell’s terms, Eurasia and Eastasia, but the truth remains that Iran wants to be free from U.S. sanctions and closer to normal relations.

The result of Tisdall’s analysis is to make all non-superpower states vulnerable to the will of China, the U.S. or Russia. These superpowers, far from being in any sense restricted by the lives and capabilities of the people who reside in these territories, merely become strategic pins in a map, serving only to determine the outcome of the superpowers themselves. Therefore, U.S. sanctions on the Iranian people, military intervention in Syria, Iraq, and Afghanistan, annexations of swathes of Eastern Europe, all become opportunities for, in Tisdall’s words, “a war on two fronts, or humiliation all round.”

What Tisdall fails to remember is the real, phantom threat of Nineteen Eighty-Four: not a war between two or three states, but states of war that are never at peace.

Punch-up in Mid-Air on a Tunisair Flight