President Joe Biden on Saturday became the first U.S. leader in decades to acknowledge the mass killings of Armenians in the early 20th century as a genocide. 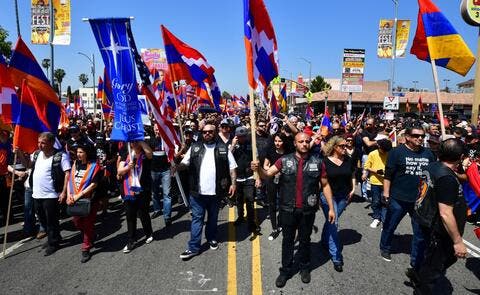 In Washington: A Popular Narrative of The Armenian Genocide

He used the language in a statement to mark Armenian Remembrance Day. Saturday was the 106th anniversary of the start of the genocide, in which Ottoman authorities rounded up, and deported or killed more than 1 million Armenians.

"Each year on this day, we remember the lives of all those who died in the Ottoman-era Armenian genocide and recommit ourselves to preventing such an atrocity from ever again occurring," Biden said.

Recognition of the Armenian genocide is long overdue, and I applaud President Biden for this announcement. It is important for all of us to look honestly at history to make sure such atrocities never happen again. https://t.co/h5MhhgZnsy

"We honor the victims of the Meds Yeghern so that the horrors of what happened are never lost to history," Biden said, using the Armenian term for the genocide. "And we remember so that we remain ever-vigilant against the corrosive influence of hate in all its forms."

The use of the term "genocide" in Biden's statement is likely to cause tension between his administration and Turkey, which denies that it mistreated Armenians. Biden spoke with Turkish President Recep Tayyip Erdogan and reportedly warned him about his planned statement.

"We reject and denounce in the strongest terms the statement of the president and the U.S. regarding the events of 1915 made under the pressure of radical Armenian circles and anti-Turkey groups," the ministry said in a statement to Anadolu Agency.

The ministry added deaths of Armenians in eastern Anatolia took place in 1915 when some sided with invading Russians and revolted against Ottoman forces, and during subsequent relocation of Armenians there were casualties, but those events did not meet definition of "genocide" under international law.

"The nature of the events of 1915 does not change according to the current political or domestic political considerations," the Foreign Ministry's statement said. "Such an attitude serves only a vulgar distortion of history."

The fact that the Armenian genocide happened beginning in 1915 is well-accepted within academic circles. However, the Turkish government has continued to deny the culpability of its predecessor -- the Ottoman Empire.

We mourn all who were murdered in the Armenian Genocide. When we fail to acknowledge the past, history can repeat itself, which is why I advocated for the U.S to formally recognize this atrocity for what it was: genocide. I commend President Biden for taking action.

President Ronald Reagan was the last U.S. leader to acknowledge a genocide, but later backtracked his use of the term after upsetting Turkey.

Biden acknowledged that many survivors of the genocide eventually resettled in the United States, and "enriched" the country "in countless ways." 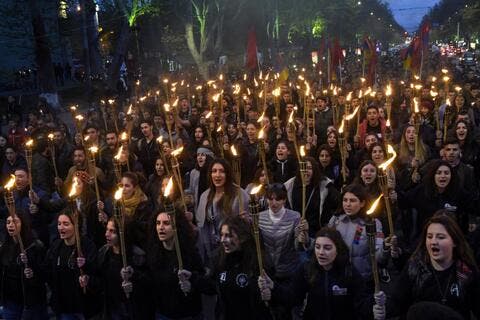 "We honor their story. We see that pain. We affirm the history. We do this not to cast blame but to ensure that what happened is never repeated," he said.

"Today, as we mourn what was lost, let us also turn our eyes to the future -- toward the world that we wish to build for our children. A world unstained by the daily evils of bigotry and intolerance, where human rights are respected, and where all people are able to pursue their lives in dignity and security. Let us renew our shared resolve to prevent future atrocities from occurring anywhere in the world. And let us pursue healing and reconciliation for all the people of the world."