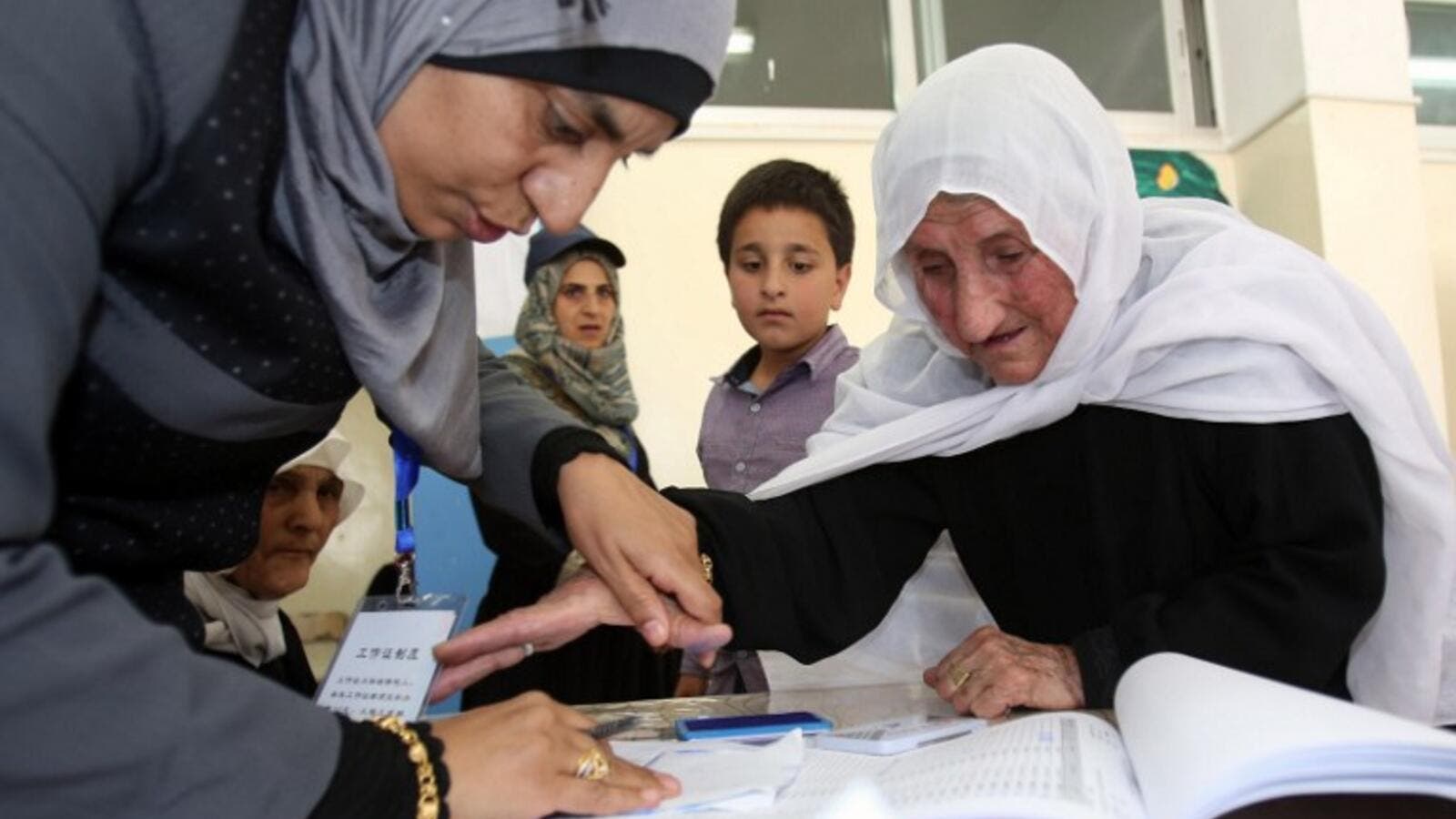 An elderly Jordanian woman is assisted by a member of the electoral commission as she votes in the parliamentary elections at a polling station in the capital Amman on September 20, 2016. (AFP/Khalil Mazraawi)

The Independent Election Commission (IEC) on Thursday announced the preliminary results of five districts, two of which had three women winning outside the quota.

Meanwhile, the IEC announced that no re-vote would be held in the Central Badia District, where sabotage of ballots was reported.

At a press conference, Mustafa Barari, head of the commission's special committee entrusted with auditing the elections' results, announced the initial outcomes of Karak, Balqa and Irbid's 1st and 4th districts as well as the Central Badia.

In Karak, the number of voters stood at 103,451 with 10 seats allocated for the southern constituency, including those designated for women and Christians.

Out of eleven competing lists, six have made it to the 18th House.

In the Watan list, Atef Tarawneh, who served in the two previous Parliaments and was the House speaker in the 17th Parliament, won by 12,054 votes.

In Irbid’s 1st District, the number of voters stood at 113,596, said Barari, who noted that six seats were allocated for this constituency. One of the winners, Abdul Munim Oudat, has served in the 17th House, so did Mijhem Sqour from Wafaa list in Irbid’s 4th District.

In the Balqa District, the number of voters stood at 124,614, who picked eleven winners, including two Christians and one for women’s quota.

Mutaz Abu Rumman from the Adaleh list recorded a comeback after garnering 6,856 votes. From the same list,  Jamal Gammoh claimed the Christian seat for the second consecutive time by 6,540 votes.

As for the Central Badia, Mahasen Shraa from the Wafaa list won by 3,382 votes, Habis Fayez from the Baraka list by 3,306 votes and Rasmiye Kaabneh under the women’s quota by 2,961 seats.

The district witnessed acts of sabotage when anonymous people stormed polling stations and snatched and destroyed a number of ballots before returning the stolen ones later Tuesday. Some were intact, it was found following an audit, while others were in such a bad shape that they were discarded, IEC President Khaled Kalaldeh said at another press conference later in the day.

Kalaldeh explianed that 17 ballot boxes in the Central Badia were believed to be tampered with or stolen, prompting the commission to audit them.

“After thorough examination, 10 ballot boxes were found to be intact. Another was found to be tampered with but we managed to rectify its situation based on matching electronic and hard copies of related documents,” he said, adding that four boxes were destroyed and one was still missing.

“As a result, we have decided to invalidate the four boxes that were stolen and the one that is missing,” Kalaldeh said.

With the announced preliminary results, the main features of the new legislature have taken shape.

The 18th Parliament will be split by tribal figures, businesspeople, Islamists and leftists with better showing of women.

MPs representing political parties will make 20 per cent of the upcoming House, according to Kalaldeh, who noted that 56 out of 170 candidates who served in previous parliaments won seats in the 18th Parliament.

On the other hand, the total number of women who voted stood at 716,716, making up 32 per cent of the registered eligible female voters.

A total of 775,684 men, 40 per cent of the total eligible male voters, cast their ballots in the current elections.

A total of 20 women out of the 252 who ran for candidacy won seats in the 18th House, including five outside the quota.