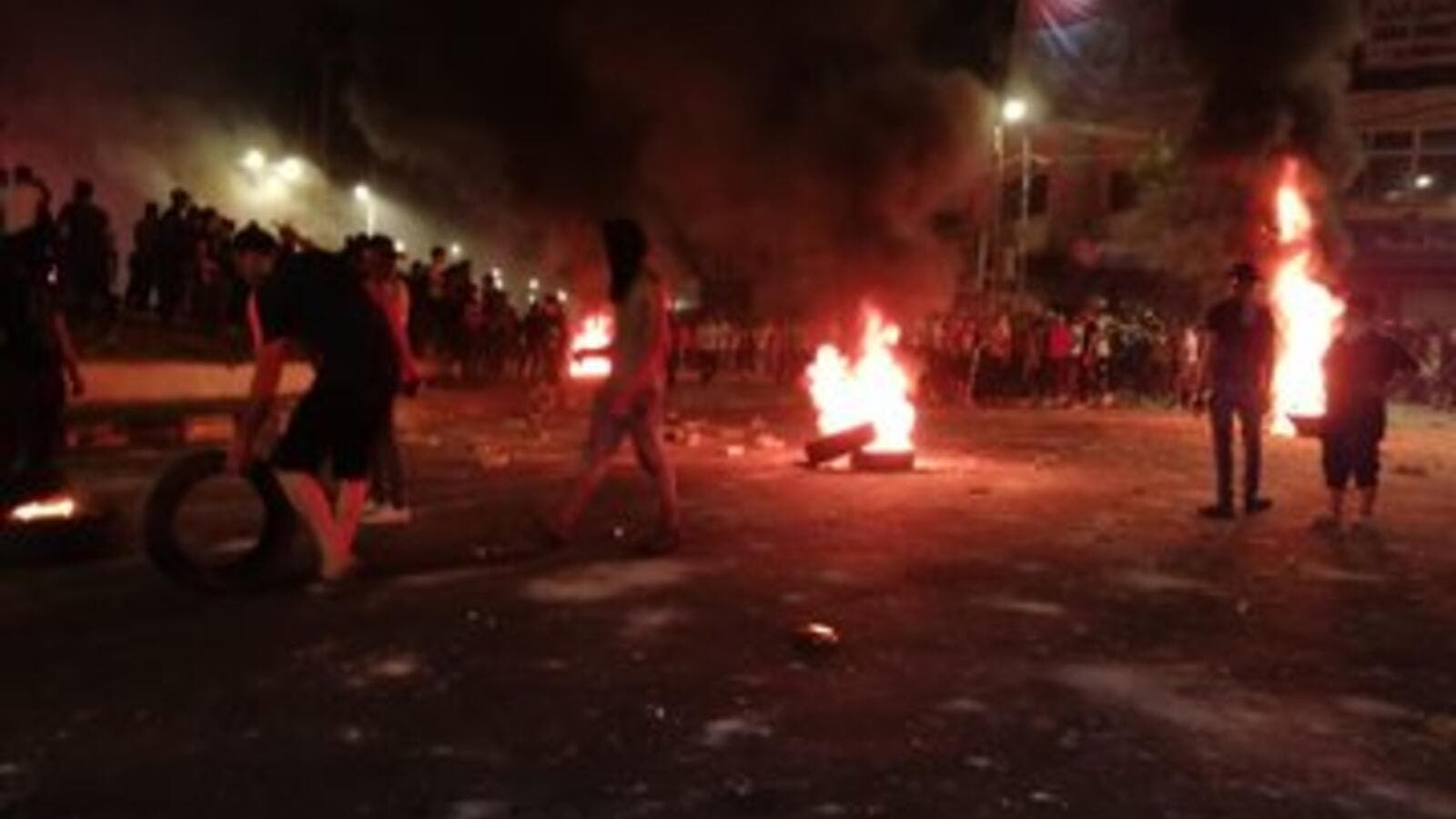 Protesters in Ramtha during small-scale riots that broke out on Friday that saw young people closing the main street in their northern district in protest against the government's decision to intensify measures on the Jaber border crossing with Syria. (Twitter)

The government on Saturday justified recent measures imposing restrictions on border crossings as an anti-smuggling effort taken to protect society from the hazards of narcotics, weapons and smoking, in the wake of small-scale rioting in Ramtha, as residents of the northern border town took to the streets on Friday to express anger over the decisions.

A meeting late Saturday between government representatives and Ramtha dignitaries resulted in an agreement to cease all forms of escalation, according to news reports.

In a statement, the government highlighted that smuggling, in whichever form it may take, poses a threat to society and the national economy, noting that success in combating smuggling would contribute to overcoming a variety of economic challenges, the Jordan News Agency, Petra, reported.

“The government understands the difficult circumstances that have affected Ramtha during previous years as a result of the border closure with Syria,” the statement said, adding that closing the border with Syria has affected the majority of the Kingdom’s cities and governorates.

The northern district, some 90km north of Amman on the borders with Syria, witnessed small scale riots on Friday night that saw young people closing the main street in their northern district in protest against the government’s decision to intensify measures on the Jaber border crossing with Syria.

The government noted that it is scheduled to hold a meeting on Sunday with the northern district’s representatives over the issue, “in a way that guarantees the rule of law and national interests, from one side, and protects the citizens’ interests from the other”.

The Council of Ministers has taken a decision recently, allowing passengers coming into the country from land, sea and air ports to bring with them only one carton of cigarettes, containing ten packs of 200 cigarettes, instead of two cartons previously.

The statement pointed to the government’s “holistic vision” to curb the smuggling phenomena in addition to boosting economic and social development across the Kingdom, according to Petra.

The government reiterated its commitment to dialogue and its respect for peaceful protest as well as “constructive and objective” criticism.

It voiced dismay at the practices of “a minority of protesters”, which include firing guns into the air, throwing rocks and fireworks at security authorities, blocking roads with burning tyres, as well as vandalising public facilities and government institutions, according to Petra.

The statement explained that the measures taken are not limited to the Jaber border crossing, rather all crossings whether via land, air or sea, citing an increase in narcotics, cigarette and firearm smuggling.

The government stressed that the procedures it had taken not only target the Jaber border crossing but all land, marine and air crossings, citing a “remarkable increase” in smuggled tobacco products, narcotics and weapons in the country.

These procedures target a certain type of people who “practice smuggling as a profession”, which leads to negative results, the government said, stressing that these procedures will not affect the legal trade activities that commit to effective laws and regulations.

The government also said it has received several complaints from merchants and investors, especially those residing in Ramtha, who called for implementing stricter measures to mainly address smuggling of cigarettes that negatively affected the local market and fair competition principles.

The statement also urged for adopting dialogue a way from violent protests and riots, especially that all people stand at the same side, which is protecting the national economy and citizens’ interests.

The government estimated the losses the national economy incurred in the first seven months of 2019 as a result of smuggling cigarettes from all border crossings at around JD130 million, according to the statement.

The Cabinet on Friday specified a cigarettes allowance for arriving passengers of one carton, containing 10 packs with 200 cigarettes, instead of two cartons.

The decision was made upon the recommendations of a committee formed to discuss the challenges and difficulties facing the Jaber border crossing and address cigarette smuggling, and would be imposed on every passenger arriving at any land, air or sea crossing, including the Jaber crossing.

The decision also prevented a tobacco company operating in the Zarqa Duty Free Zone from exporting its products, while allowing it to establish factories in the customs zone and sell the products in the local market only, in accordance with effective laws.

Instructions were also made to the company implementing amendments in the Jaber crossing, to speed up procedures for lanes designated for frequent passengers, according to Petra.

To curb cigarette smuggling primarily through the Jaber crossing, the decision also expanded the jurisdiction of customs personnel and security to include the no man’s land between Jordan and Syria, entitling them to perform initial inspections on travellers before they enter the customs zone.

The decision also labels as “smuggling” any involvement in the possession of more than one box of cigarettes, containing 10 packs with 200 cigarettes, and stipulates applying strict legal procedures, including the seizure of vehicles containing extra boxes.

The Cabinet also decided to set up security check points around the clock to protect customs personnel.

A number of Ramtha residents were quoted in Al Rai newspaper claiming that their anger was not about the “one box of cigarettes limit” but about the newly imposed restrictions on the Jaber crossing, under which “Bahara” would not be allowed to bring clothes, shoes, sweets, fruits and vegetables from Syria as in other border crossings with other countries

“Bahara” — Arabic for sailors — is the term used to describe drivers of vehicles carrying passengers to Syria, Iraq and other countries.

According to the government statement, the new procedures will not affect goods and foodstuffs for personal use, including fruits and vegetables.

Large numbers of people in Ramtha work in passenger ferrying services. Before the break-out of the crisis in Syria in 2011, a total of 1,200 passenger vehicles used to operate on the Ramtha-Daraa and Jaber-Nasib border crossings between Jordan and Syria.

The northern district also hosts the largest share of Syrian refugees after Mafraq.

Ramtha Deputy Khaled Abu Hassan said that work was under way to contain the “small-scale rioting” in the northern district.

“We in Ramtha are against smuggling and against any acts that can harm the national economy,” Abu Hassan said on Saturday.

“The riots were the results of misunderstanding of the government’s measures,” he said.