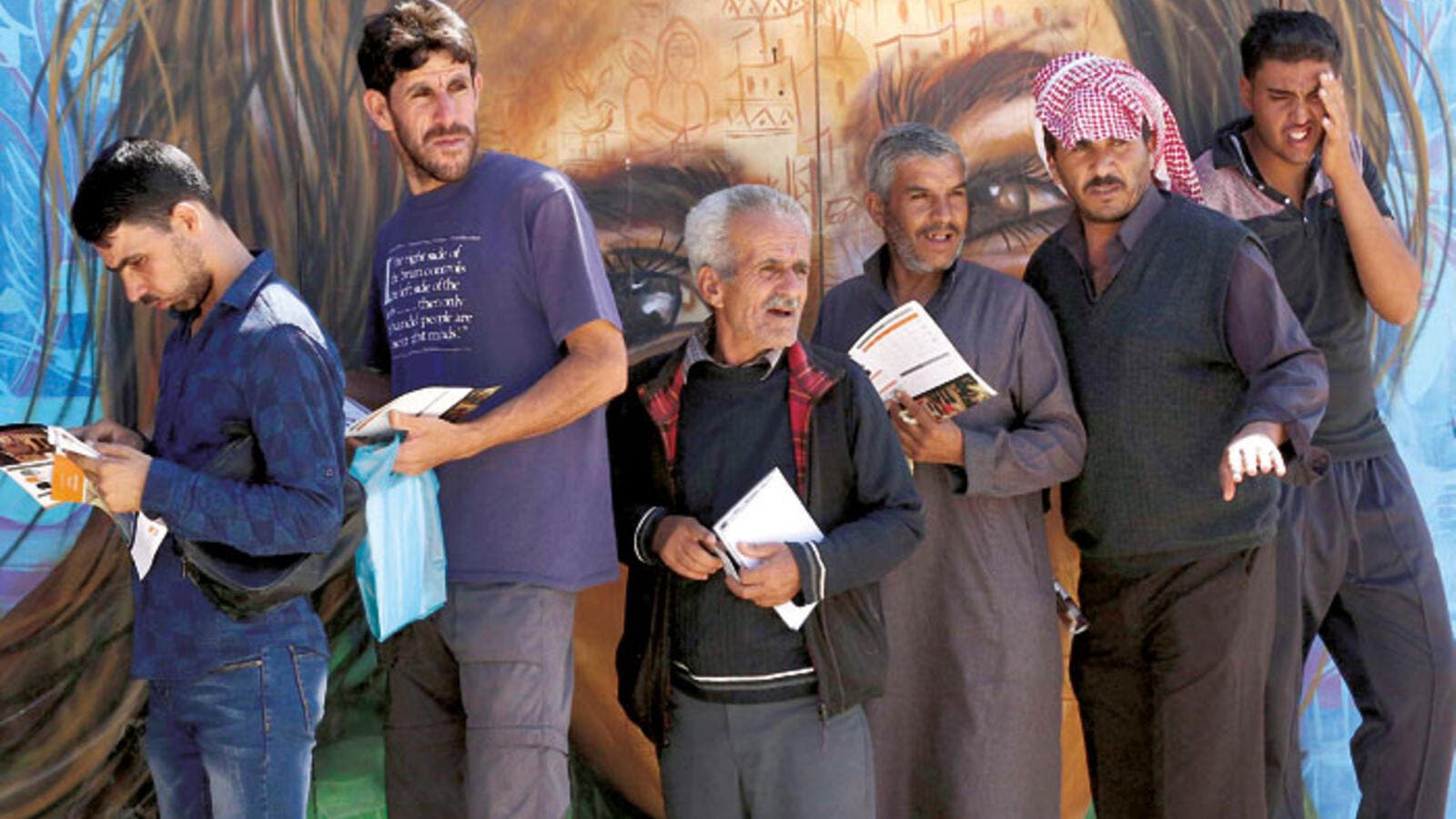 Syrian refugees queue to register their names for employment at the Zaatari refugee camp, on October 4. (AFP)

Following the Jordan Compact agreement in February 2016 at the Supporting Syria Conference in London, Jordan pledged to create 200,000 work opportunities for Syrians in exchange for aid and an agreement that relaxes the EU's rules of origin for imports.

While this has rightfully shown that refugees are an opportunity for the host state, the agreement's conditions limit Syrian refugees contribution to Jordan's economy

The Jordan Compact is in its nature a ground-breaking agreement. It shifts the perception of refugees from a liability to an opportunity, and encourages increased inclusion of refugees in the labor force, and long term self-sufficiency. Values of refugee skillsets increase under these new perceptions, and will hopefully fundamentally shift the response to refugee intake globally.

This is of particular interest to Jordan, a country with the world's second highest refugee population per capita. Jordan's recent high Syrian refugee intake has been a popular topic of discussion and has formed the foundation for changes in policy framework regarding refugees.

According to the agreement, 52 Jordanian products are exempted from rules of origin stipulations on the condition that they are made up of at least 15 percent Syrian labor, and are manufactured in one of 18 special economic zones. Within two years, this minimum will increase to 25 per cent of the production line.

As a result, government, NGOs, and other relevant stakeholders have shifted their focus to employing Syrians within these special economic zones, particularly in factories that manufacture the 52 eligible products.

While this rightfully shifted the perception of refugees to more of an opportunity than a liability, it does not properly harvest their skillsets.

According to UNHCR data, most Syrian refugees used to be employed in agriculture, which is consistent with many of them coming from rural areas in Syria. Another popular sector amongst Syrian refugees is construction, the second largest area of previous employment.

While the Compact incentivizes employment in the manufacturing sector, Syrian refugees in Jordan are not skilled in this field.

Manufacturing and industrial jobs were not popular amongst Syrians, with less than 2 per cent having previously worked in this sector. While it is not impossible to re-train employees in other sectors, this seems to defeat the purpose of harvesting existing skillsets and shift resources to training refugees in unfamiliar work.

Difficult for Companies to Hire

Despite the Compact's conditions, conversations with companies located in the industrial zones revealed that in the short run there is little incentive for many of them to hire Syrian refugees.

One company reported that hiring Syrians subjects a company to additional levels of scrutiny from international organizations and government entities. Others reported low retention rates, with many of the hired refugees leaving the job within weeks. Considering the necessity for training, this represents a significant loss to company resources.

Furthermore, the industrial zones are dominated by investments in the food, engineering, and textile sectors. The food processing sector, the highest value sector operating in the industrial zones, is not included in the agreement with the EU, in spite of it being a sector of comparative advantage for Jordan.

Engineering firms, on the other hand, produce little exports as their work is mostly domestic or in immovable assets. As for the textile sector, only some textiles are included in the agreement. Major textile firms direct their exports towards the United States, with whom Jordan has a free trade agreement. Altogether, this leaves these industries with little incentives to hire Syrian labour.
European Market Access

Accessing the European market has had its complications. So far, only two have managed to export to Europe out of a total of eight companies that have received export license numbers under the Jordan Compact. Finding customers in the EU has been difficult due to Jordanian products' relatively expensive prices as a result of high input costs and, in some cases, inability to meet EU product standards.

Potential to be Realized

In spite of the challenges related to the Jordan Compact, the manufacturing industry is an ideal sector to focus resources in. It is highly beneficial for developing countries to have a strong base of tangible goods production. This is especially the case with Jordan, a country dependent on a service sector that in itself depends on the surrounding political stability.

Moreover, the manufacturing sector creates many job opportunities, which is critical in tackling Jordan's high unemployment rate, currently at 18 per cent. In this respect, involving Syrian refugees in this field is a strategic choice for Jordan, which the Jordan Compact rightfully pointed out.

While it may not be the ultimate solution to Jordan's economic shortcomings, it had the right idea in mind - now it needs to implement it properly to see it's benefits realized.

Shaddin Almasri is an economic policy researcher in Jordan. In 2015, she graduated with a Bachelor of Arts from the American University of Sharjah. @ShaddinAlmasri