Published August 18th, 2022 - 10:54 GMT
Afghan men walk past the blue dome of a mosque a day after the blast in the outskirts of Kabul on August 18, 2022. The death toll from a blast which ripped through a mosque packed with worshippers in the Afghan capital Kabul on August 17, has risen to 21, police said. (Photo by Wakil KOHSAR / AFP)

The death toll in the blast that took place in a mosque in Kabul's Khair Khana area during evening prayers has gone up to 21, said the spokesman for the Kabul security command according to local media. 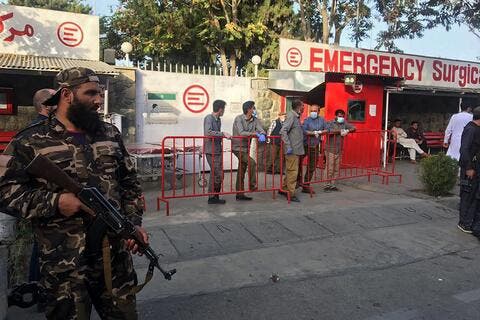 A top Islamic cleric named Amir Mohammad Kabuli was among those killed in the blast.

The Taliban has not issued any statement on casualties, according to Afghan news agency and no terrorist group has claimed responsibility for the blast so far.

Two weeks ago, two deadly blasts in Kabul claimed the lives of 10 people, injuring 40 others. The Islamic State claimed responsibility for both attacks.

This blast comes on the heels of one year of Taliban rule in Afghanistan. Rights groups said the Taliban have broken multiple pledges to respect human rights and women's rights.

After capturing Kabul in August last year, the Islamic authorities have imposed severe restrictions on women's and girls' rights, suppressed the media, and arbitrarily detained, tortured, and summarily executed critics and perceived opponents, among other abuses.