As the investigation into the horrific murder of Jamal Khashoggi continues, some have begun pointing out how strange it is that his death is the one that has put Saudi Arabia on the defensive, and not the war in Yemen.

The Khashoggi affair has dominated not only headlines, but has already begun transforming the international political landscape in subtle ways. Turkey is leveraging the investigation to re-normalize relations with the U.S. and Europe; U.S. Senators are beginning to pressure Trump into re-thinking the relationship with Saudi; businesses are beginning to publicly distance themselves from Saudi.

Those seeking justice for Khashoggi are hoping that there is a veritable link to crown prince Mohammed bin Salman, who is thought to be the one ultimately behind the murder.

But bin Salman is already tangibly connected to the medieval siege of Yemen, responsible for tens of thousands of brutal murders and millions more at risk of famine. He is the one who ordered the Saudi-led coalition’s entrance in Yemen, and he is the one who oversaw their war strategy, which involved wiping Yemen’s agricultural production and local economy off the face of the Earth before imposing a blockade.

Quantifying the Difference in Coverage

Before Saudi forces assassinated Khashoggi, they dropped a missile on a school bus full of children in Yemen. They killed 51 people, including 40 children.

Tallying the total number of Google results for each story, Khashoggi’s death and the school bus attack, offers an instructive if cursory understanding of the impact each event has had on the world’s consciousness. 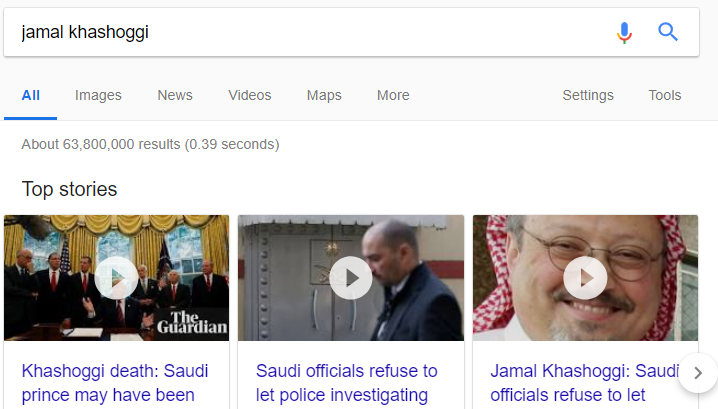 Searching for 'Jamal Khashoggi' produces, at the time of writing, 63,800,000 results. Compare this to searching for the Yemen school bus attack.

At a glance, the Khashoggi story has received about six times more coverage than the deadly school bus attack. The bombing was no accident either: there is every sign a missile was guided to hit a school bus. This is because the coalition initially defended as a “legitimate military target,” before offering to conduct an internal investigation, and forensic investigations revealed that a laser-guided GBU-12 Paveway II bomb was used to conduct the attack.

Comparing these two stories directly is not intended to quantify the worth of each tragedies by body count, and by extension, glossing over the fact that Saudi assassinated a high-powered dissident. Rather, it illustrates that Khashoggi’s death has rattled the world more, and elicited more signs of empathy and solidarity than the war in Yemen.

Whose Death is Most Impactful?

Droves of countries, media outlets and people around the world standing with the oppressed and targeted has forced Saudi onto the back foot, but why is the war in Yemen effectively business as usual?

Once it became clear Khashoggi was murdered on Saudi orders, Germany’s Angela Merkel announced that Germany would be suspending arms sales to the country, arms that would have likely been used against Yemeni people. Merkel was silent after the bomb hit the school bus in Saada, Yemen, letting German arms flow to Saudi.

Although many U.S. and European companies withdrew from Saudi’s financial conference intended to attract foreign investment, arms sales to support Saudi’s war effort has not been faltered. Those arms are still flowing steadily into Saudi, which are then used in Yemen.

Evidently, there isn’t enough pressure on world leaders to withdraw their support for the war in Yemen when Yemenis die, only when important Saudis die. That is a moral failing.

On the same day Turkey’s Recep Erdogan addressed members of his party, the AKP, the U.N. announced that 12 million people in Yemen are at serious risk of famine. That’s roughly half the population of the country.

Mark Lowcock, the head of the United Nations Office for the Coordination of Humanitarian Affairs (OCHA), spelled out the stakes in a tweet, saying “There is now a clear and present danger of an imminent and great big famine engulfing #Yemen: much bigger than anything any professional in this field has encountered during their working lives.”

The lives of Yemen’s people are simply more disposable than the lives of well-connected people like Jamal Khashoggi. But his tragic death has drawn more attention to the fact that Saudi’s war in Yemen can only continue as long as leaders in the U.S. and Europe continue signing off on it.

But even if this happens, know that it was not, and never has been, the bodies of Yemeni civilians piling up and the famine or cholera outbreaks that swayed decision makers: these bodies have always been considered part of the ‘cost of doing business,' with Saudi Arabia.