King Abdullah, in Ramallah on Monday, reaffirmed that Jordan will always stand with the Palestinian people and support them in the face of challenges, saying "we are closest to each other and we are in the same boat". 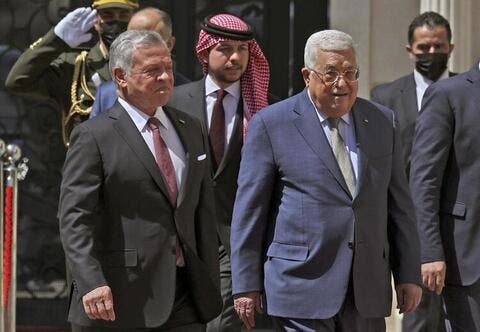 Speaking at the top of the meeting with Palestinian President Mahmoud Abbas, attended by His Royal Highness Crown Prince Al Hussein bin Abdullah II and a number of senior officials from both sides, King Abdullah voiced appreciation for the warm welcome in Ramallah, expressing best wishes on the occasion of the holy month of Ramadan.

His Majesty underlined that security and stability cannot be achieved in the region without reaching just and comprehensive peace on the basis of the two-state solution, which guarantees the establishment of an independent Palestinian state on the 4 June 1967 lines with East Jerusalem as its capital.

The King called for ending all unilateral Israeli measures, especially in Jerusalem, which undermine the prospects of achieving comprehensive and lasting peace, stressing that the goal is to have a Palestinian state living side-by-side with Israel in peace and security.

His Majesty noted that Jordan will continue all efforts to preserve the historic and legal status quo of Jerusalem, and safeguard its Islamic and Christian holy sites, under the Hashemite Custodianship.

During the talks, the King emphasised the importance of giving the Palestinian cause the required international momentum, to avoid having it eclipsed by other recent crises.

For his part, President Abbas welcomed His Majesty and the Crown Prince, highlighting the importance of the visit within the framework of continuous consultations and to seek the King’s counsel.

President Abbas underlined that the Palestinian and Jordanian peoples share the same hopes and concerns, expressing appreciation for His Majesty’s ongoing outreach.

President Abbas voiced appreciation for His Majesty’s efforts to safeguard Islamic and Christian holy sites in Jerusalem and preserve the historic and legal status quo.

Talks covered the developments in the Palestinian Territories and the need to maintain calm and bolster stability, especially during Ramadan, as well as the importance of respecting the rights of Muslims to worship at Al Aqsa Mosque/Al Haram Al Sharif, without provocation or interference.

The importance of working with all sides to avoid any escalation that could undermine the prospects of achieving peace was also covered during the talks.

Moreover, discussions touched on the importance of coordinating efforts to maintain support for UNRWA to enable it to continue to provide its vital services in accordance with its UN mandate.

The need to continue advancing diplomatic efforts in service of the two peoples, as well as bolstering bilateral cooperation, especially in the economic field, was discussed at the meeting.

Talks also covered joint regional projects and means to allow for Palestinian participation, especially in projects related to food security and mitigating the repercussions of the Ukraine crisis on the region.

Earlier, the King was accorded an official welcoming ceremony upon arrival at the Palestinian presidency headquarters in Ramallah.

His Majesty, accompanied by the Crown Prince, returned to Jordan later on Monday.