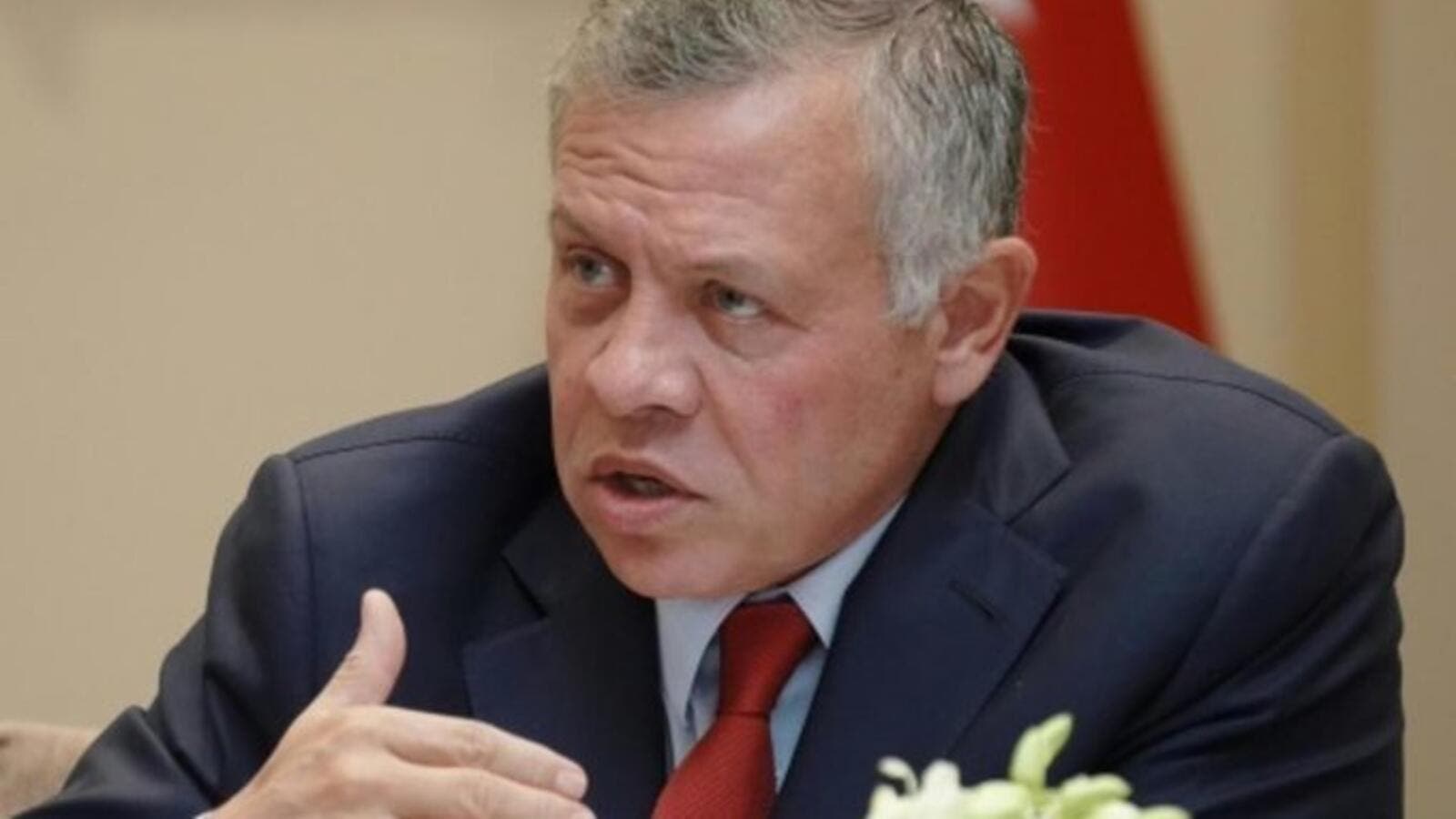 Jordan’s King Abdullah II (Twitter)
Highlights
Jordan and Egypt are the only two Arab states that have formal peace treaties and diplomatic relations with Israel.

Jordan’s King Abdullah II said in an interview published Monday that the Hashemite Kingdom’s relationship with Israel “has been on pause for the past two years,” expressing hope that Israelis will succeed in electing a lasting government in March to increase stability in the region.

Abdullah also indicated he saw promises by Prime Minister Benjamin Netanyahu to annex parts of the West Bank as empty electioneering, and expressed concerns over the resurgence of the Islamic State terror group.

“We understand unfortunately that the issue of elections that have being going on for over a year means that Israel is looking inwards as it’s dealing with its domestic issues, and as a result our relationship is on pause,” the monarch told TV channel France 24 in an English-language interview.

“Because of the electioneering season, which has unfortunately taken a long time, there have been no bilateral communications or movement,” he said. “We hope that the Israeli people will decide on a government sooner rather than later, and then we could all see how to move forward.”

While security ties between Israel and Jordan have flourished, political relations have soured recently over a number of matters including Netanyahu’s pledge in September to annex the Jordan Valley in the West Bank, if he is given another term in office.

Recent months have seen Amman recall its ambassador to Israel, no joint ceremony marking the quarter-century anniversary of the peace agreement and the termination of special arrangements that allowed Israeli farmers to easily access plots of land inside Jordan.

Amman also briefly recalled its ambassador to protest the arrests of two Jordanian nationals, who were eventually released by Israel.

Jordan and Egypt are the only two Arab states that have formal peace treaties and diplomatic relations with Israel.

Abdullah, who in November said that Israeli-Jordanian ties were “at an all time low,” denounced Netanyahu’s annexation pledge but refused to go into detail how Amman could respond to such a move, after previously saying it would have “serious consequences.”

“There is certain rhetoric coming out of Israel because of the election politics, which is creating tremendous concern to all of us in the region because they are moving way off in a direction that is completely uncharted territory for all of us, and can only create more instability and miscommunications,” Abdullah said. “When you have certain announcements and decisions, like the West Bank, it creates a lot of doubt for many of us on where are certain Israeli politicians going.

“The two-state solution in my mind, and I know in the majority of European countries, is the only way forward. The one-staters who are pushing their agenda make no sense to me whatsoever because there are two standards, two sets of laws for two sets of people. That can only create instability.”

Jordan has long supported a two-state solution to the Israeli-Palestinian conflict, which would include the establishment of a Palestinian state in the West Bank, Gaza Strip and East Jerusalem.

Regarding US President Donald Trump’s long-awaited Middle East peace plan, Abdullah expressed optimism and said he would not prejudge the merits of the plan before it is unveiled. He said he would look at Trump’s proposal from a perspective of a “glass half-full” once it is released.

Since shortly after the Trump administration recognized Jerusalem as Israel’s capital in late 2017 and announced the US would move its embassy in the Jewish state to the city, the Palestinians have said they will not work with any peace process in which the US is the dominant interlocutor.

In addition to its moves related to Jerusalem, the Trump administration has undertaken several other measures seen as marginalizing the Ramallah-based Palestinian leadership, cutting hundreds of millions of dollars in aid to the Palestinians and the UN agency that supports Palestinian refugees and their descendants, closing the PLO representative office in Washington, and declaring that settlements do not violate international law.

Trump administration officials have also consistently declined to endorse a two-state solution.In addition to its moves related to Jerusalem, the Trump administration has undertaken several other measures seen as marginalizing the Ramallah-based Palestinian leadership, cutting hundreds of millions of dollars in aid to the Palestinians and the UN agency that supports Palestinian refugees and their descendants, closing the PLO representative office in Washington, and declaring that settlements do not violate international law.

During his interview, which aired Monday, Abdullah also warned that the Islamic State terror group was regrouping and was once again on the rise in the Middle East.

Months after the ousting of IS last year from its last Syrian holdout, Abdullah said his “major concern is that we have seen over the past year the re-establishment and rise of ISIS, not only in southern eastern Syria but also in western Iraq.

“We have to deal with the reemergence of ISIS,” the king added ahead of talks this week in Brussels, Strasbourg and Paris. He also said many foreign fighters from Syria were now in Libya.

“From a European perspective, with Libya being much closer to Europe, this is going to be an important discussion in the next couple of days,” Abdullah said.

“Several thousand fighters have left Idlib (Syria) through the northern border and have ended up in Libya, that is something that we in the region but also our European friends will have to address in 2020.”

Regarding last week’s spike in tensions between Iran and the United States, Abdullah said he hoped that “in the next several months we set the right tone for the region, which is really to bring the temperature down.”

“So far it looks like de-escalation, we hope that that continues to be the trend. We can’t afford instability in our part of the world.

“Whatever happens in Tehran will affect Baghdad, Amman, Beirut, the Israeli-Palestinian process.”

Abdullah added that the recent deployment of Turkish troops in a training capacity to Libya “will only create more confusion” in the country.

Both sides in Libya’s conflict agreed to a ceasefire from Sunday to end nine months of fighting, following weeks of international diplomacy and calls for a truce by power-brokers Russia and Turkey.

A UN report in November said several countries were violating the arms embargo on Libya in place since the overthrow of Muammar Gaddafi in 2011.

Jordan and the United Arab Emirates have regularly supplied the forces of Libyan military strongman General Khalifa Haftar, who is backed by Turkey’s regional rivals — Saudi Arabia, Egypt and the UAE.

Jordan, whose stability is seen as vital for the volatile Middle East, hosts some 1.3 million refugees from neighboring war-torn Syria.