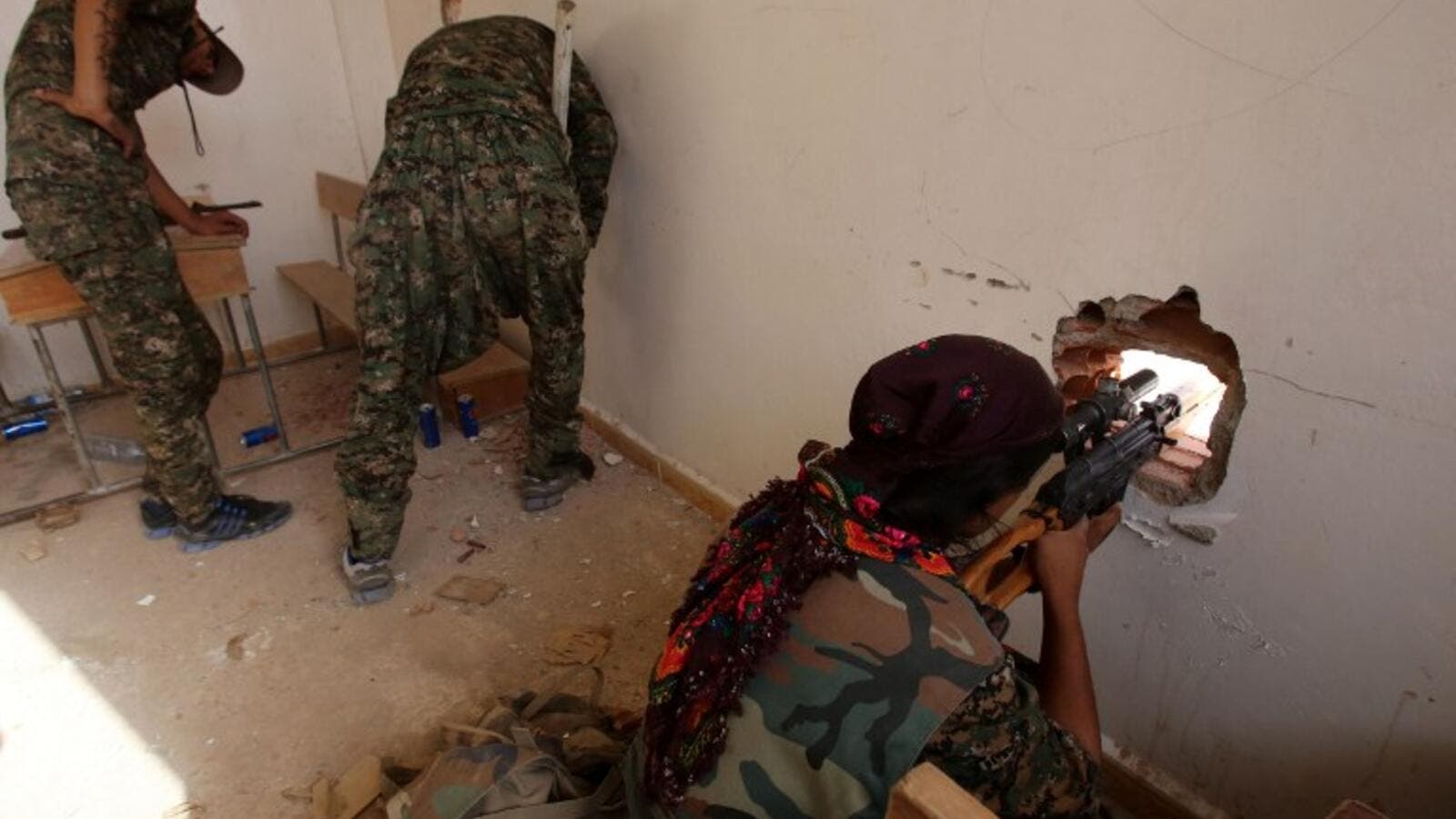 Kurdish forces position themselves inside a classroom on July 16, 2015. (AFP/File)

Syrian government troops and Kurdish forces advanced Sunday against ISIS (Daesh) fighters in the northeastern city of Hasakah, a monitor and state media said. The Syrian Observatory for Human Rights, a Britain-based monitor, said ISIS forces were now confined to two small areas in the city.

The provincial governor told state news agency SANA that “the army and national forces are in the final stage of being able to declare Hasakah city fully secure.”

The Observatory said residents who fled the fighting had begun returning to neighborhoods that were taken back from ISIS.

The extremist group began its assault on Hasakah city on June 25, seizing several neighborhoods before regime and Kurdish forces began a fight-back.

Before the assault, control of Hasakah was shared between Kurdish and regime forces, but the fighting has seen the Kurds expand the area under their control.

The Observatory Saturday said Kurdish forces now held around 70 percent of Hasakah city, with the regime controlling 20 percent and ISIS around 10 percent.

The city is the capital of Hasakah province, which is ethnically mixed and includes Arab, Kurdish, Turkmen and Assyrian residents.

Separately, the head of the Kurdish party PYD was quoted as saying he would welcome incorporating Kurdish militiamen into the Syrian army, on the condition that the institution drop its Baathist ideology.

Speaking to Al-Hayat newspaper, Saleh Muslim said fighters from the YPG Kurdish militia could conceivably join the Syrian Army in the future, but downplayed a role for President Bashar Assad in a new political arrangement for the war-torn country. “I don’t think Assad has a future in Syria, after everything that’s happened,” he added.

Muslim said a new Syrian political regime would have to abandon its “one party, one ethnicity” stance, referring to the pan-Arabism of the Baath Party.

Muslim’s PYD considers itself “anti-regime” because of several issues on which it is at odds with Damascus, but many members of the Syrian anti-regime opposition accuse the group of being in league with the Syrian authorities.

Lebanon’s Al-Manar television said Syrian troops were on the outskirts of the city, famous for being a UNESCO world heritage site, and had seized a number of mountaintop positions.

ISIS seized Palmyra in May after a short campaign which saw most of the town’s defenders abandon their positions.