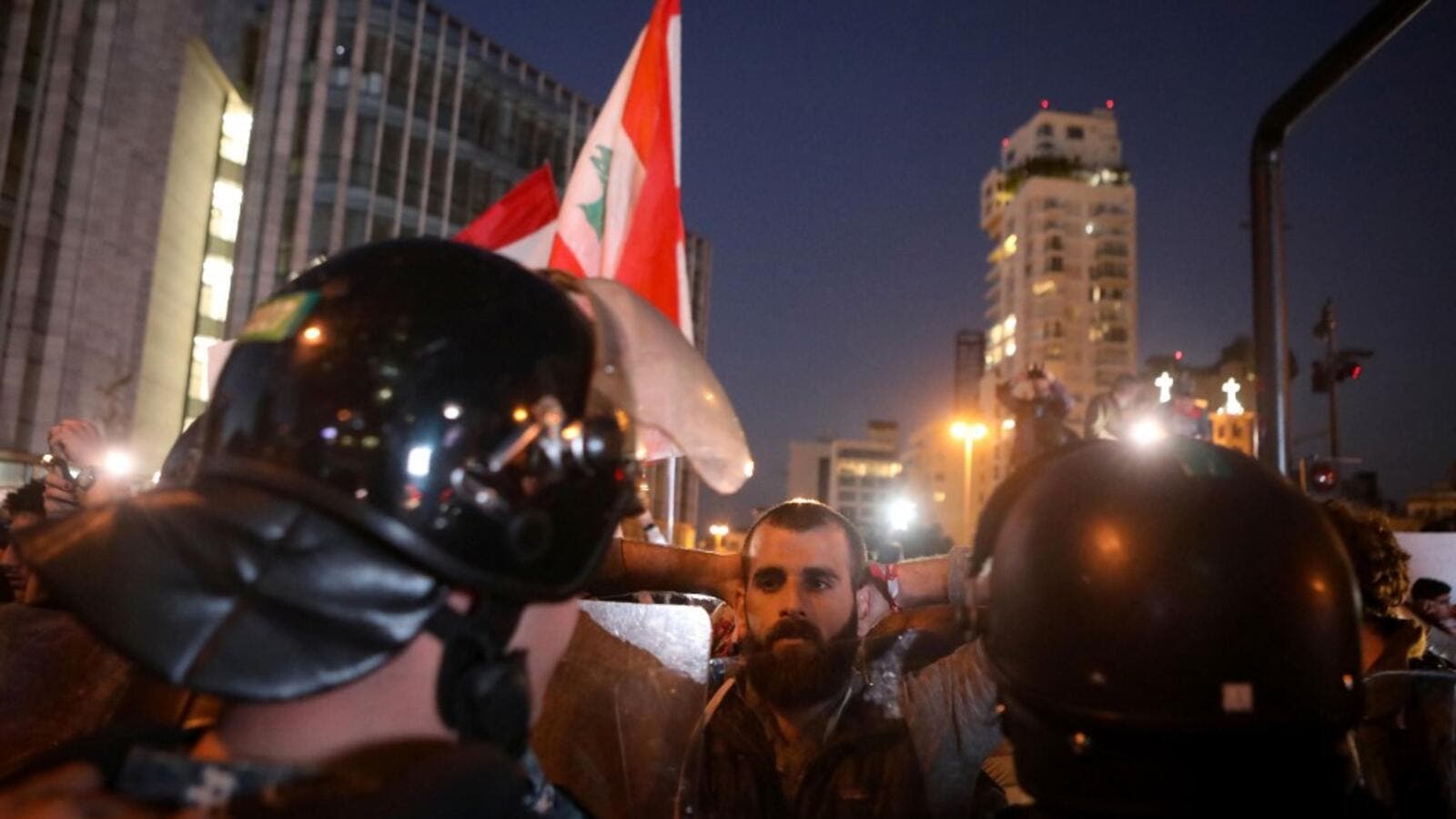 A Lebanese anti-government protester faces riot police on the eastern end of the Ring bridge that connects the western and eastern neighbourhoods of the capital Beirut on December 4, 2019. AFP
Highlights
A nationwide protest movement is demanding an end to corruption and sectarian-based politics.

Talks on forming a new Lebanese government will formally begin on Monday, the presidency announced, more than a month after a wave of protests led the prime minister, Saad Hariri, to resign.

"The presidency has set Monday as the date for the parliamentary consultations" for the designation of a new prime minister, the presidency announced in a short statement on social media on Wednesday.

Despite continued pressure from a nationwide protest movement to radically overhaul the political system, President Michel Aoun had so far stopped short of announcing formal talks to agree on a new line-up.

He and several key partners in the fractious outgoing governing coalition had apparently insisted on reaching a deal before announcing the start of formal talks with Lebanon's parliamentary blocs.

Hariri announced his resignation on 29 November, nearly two weeks into an unprecedented nationwide protest movement that has demanded an end to corruption and sectarian-based politics.

Several names have surfaced since, each time prompting the scorn or the anger of the protest camp, which has accused the ruling elite they revile of using stalling tactics to cling to their jobs.

The latest front-runner is Samir Khatib, a businessman who is less widely known than most former prime ministers and has no experience in politics.

Protesters demand the wholesale removal of the current political class and have insisted on a government dominated by technocrats.

Marching in the middle of traffic with a dozen other protesters on Wednesday evening, Fadi Hamdan, 27, said the latest name being circulated would not do.

"This person for us represents the corrupt authorities," said the unemployed pilot, walking rapidly as other demonstrators waved large national flags.

"They can't lie to us and say he's independent," he said.

The protests, which kicked off on 17 October over a proposed tax on WhatsApp calls, have brought the country to a standstill and its economy has continued to slide towards the abyss in recent weeks.

Even as Aoun announced the beginning of consultations, hundreds of protesters were gathering in central Beirut for a previously planned rally to block the main highway.

They chanted in the middle of the highway after local media earlier in the day reported a father of three in his early 40s had shot himself dead over a mounting debt.

"How many more people need to commit suicide for them to wake up?" one man told a local television channel, after the second such reported death in four days.

Protesters lit candles on the roadside in memory of those who took their lives, apparently crushed by the burden of Lebanon's spiralling economic crisis.

Lea Zeinoun, the director of a non-governmental organisation running a suicide prevention hotline, said a person ending their life was chiefly the result of a mental illness.

But she said she did fear a rise in cases "especially if the situation in the country doesn't improve".

"Today we received 15 calls in three hours, while we usually receive 150 on average per month," she told AFP.

The Lebanese pound has lost up to 30 percent of its value on the black market and many economic analysts now predict there is little any government can do to prevent Lebanon from defaulting.