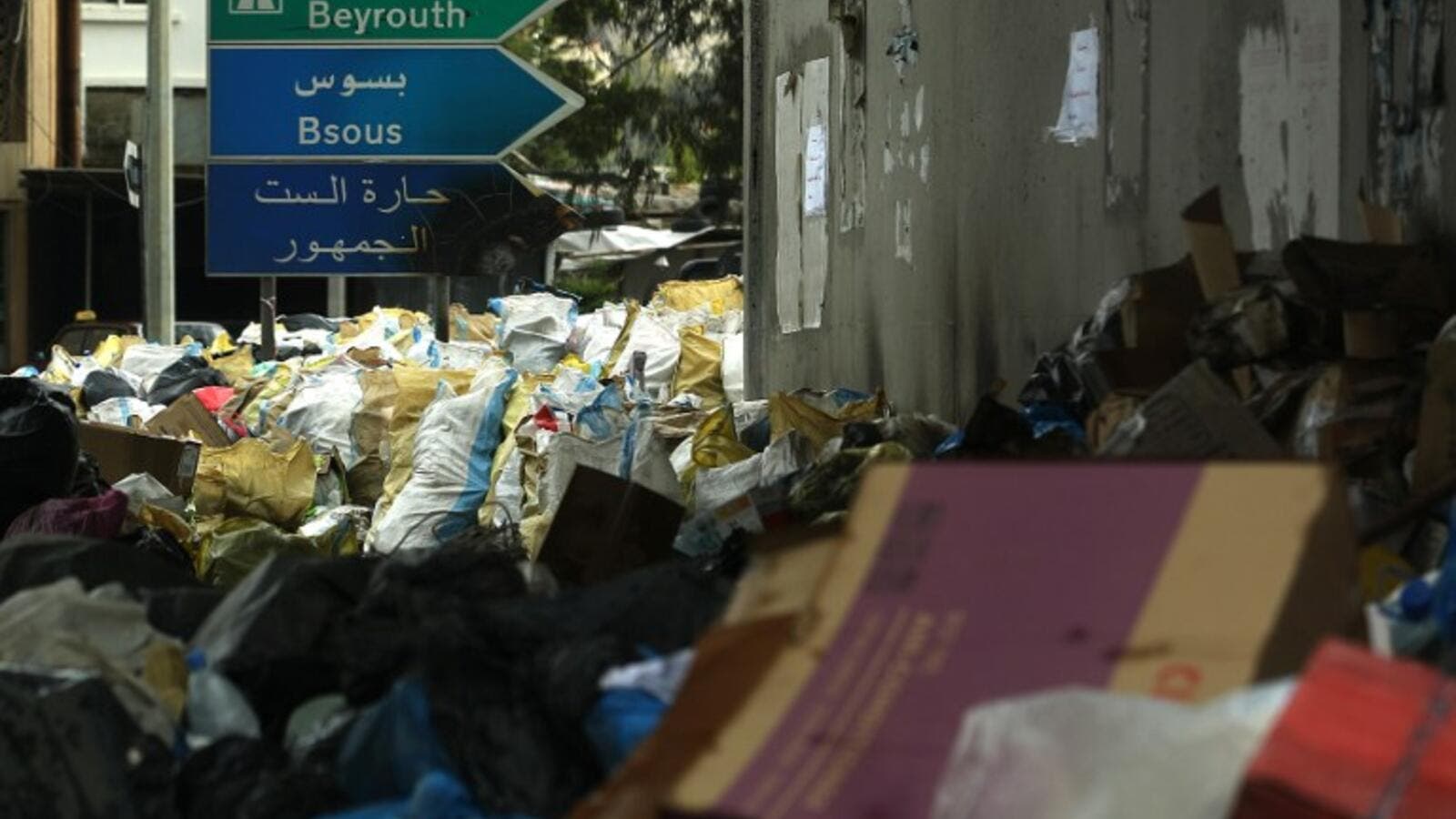 Road signs stand in the middle of a temporary garbage dump in the area of Jamhour, east of the Lebanese capital Beirut, on March 15, 2016. (AFP/Patrick Baz)

The government announced on Thursday that the waste management plan, which was adopted over the weekend, will be implemented on Friday.

Information Minister Ramzi Jreij said after a cabinet meeting at the Grand Serail: “There are no obstacles hindering the implementation of the plan.”

“Discussions during the meeting were heated at first, but they then calmed down,” he revealed.

The heated dispute was revealed by Education Minister Elias Bou Saab, who warned that the cabinet “is heading towards collapse.”

“The first hour of discussions was tense, especially over appointments in security positions,” he said.

“We will no longer accept the situation if matters continue as they are,” he warned.

“I am convinced day after day that we are headed towards a major crisis because of the unilateral manner in which decisions are being taken,” added the minister.

Commenting on Bou Saab's stances, Jreij remarked: “Perhaps he is on the verge of collapse.”

Tourism Minister Michel Pharaon confirmed the heated debate over the appointments at the general-directorate of state security, saying that it almost led to the suspension of the cabinet session.

“Prime Minister Tammam Salam however contained the dispute, demanding that the discussions remain limited the cabinet agenda,” he revealed.

The directorate had sent a bill to the cabinet on March 20, 2014 asking for the creation of a six-member leadership authority under which the director-general, Maj. Gen. George Qaraa, a Catholic, would have the casting vote, said An Nahar in Thursday.

But the former secretary general of the cabinet, Suhail Bouji, paralyzed the plan by saying that the approval of the bill requires a draft-law to be adopted by the parliament unlike a decision made by the Shura Council, the report said.

The newspaper quoted a ministerial source as saying that Bouji’s move likely came as a result of his friendship with the deputy director-general, Brig. Gen. Mohammed Tufaili.

On the trash file, Agriculture Minister Akram Shehayyeb said: “We have reached a very comfortable place regarding this issue and I will carry out more contacts.”

The minister had played a leading role in coming up with solutions to end the crisis that started with the closure of the Naameh landfill in July 2015.

A cabinet session will not be held next week due to the Easter holidays.