Lebanon: 8,000 tons of trash brought to Naameh in second day of collection 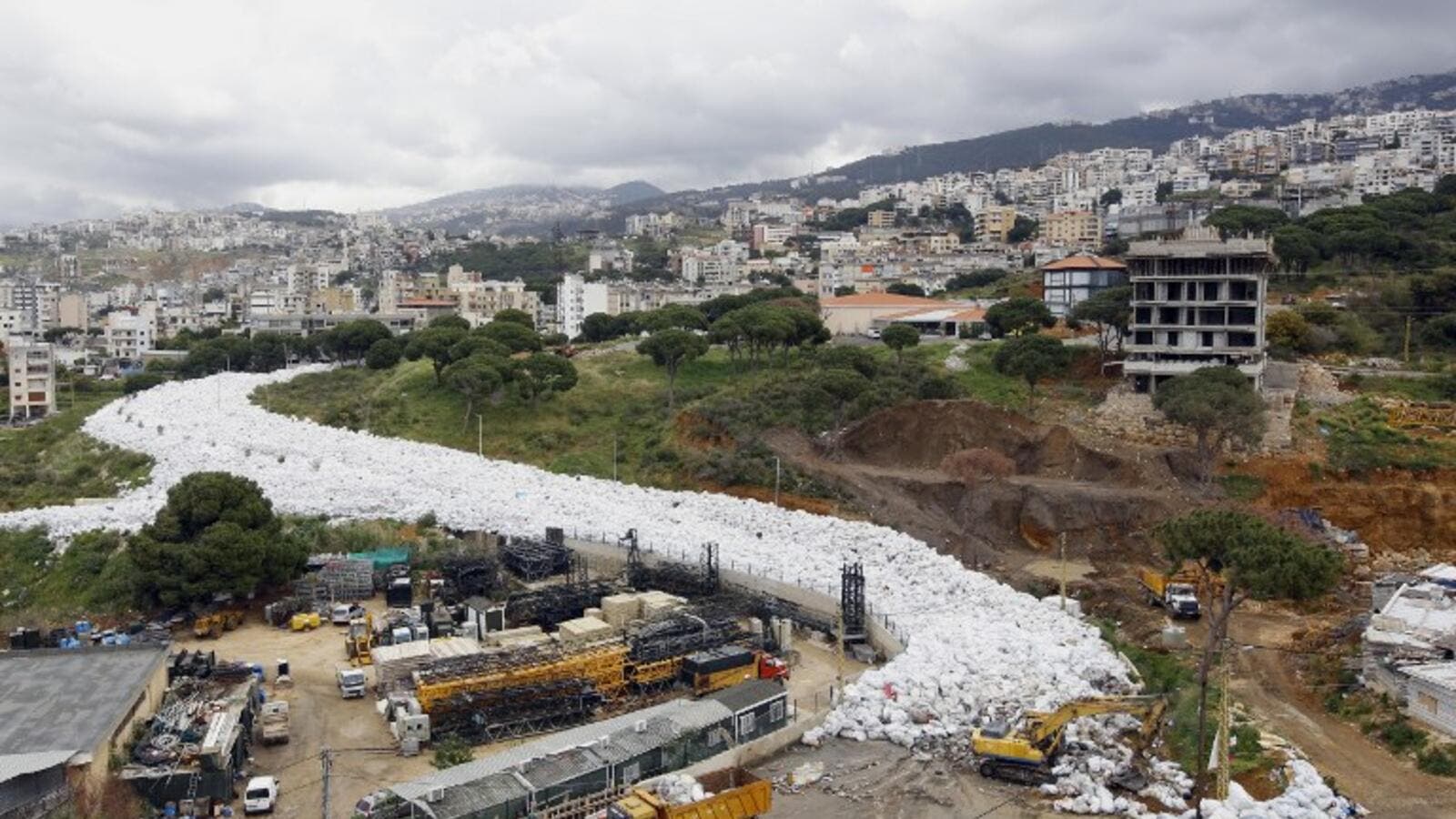 Trucks are seen next to piles of garbage in Jdeideh, a Beirut suburb, ahead of moving it to the country's largest landfill of Naameh, just south of the Lebanese capital, on March 20, 2016. (AFP/Anwar Amro)

Dozens of makeshift garbage trucks lined the entrance of the infamous Naameh landfill for a second day Sunday, as Environment Minister Mohammad Machnouk announced that more than 8,000 tons of garbage had been collected so far as part of the government’s trash plan. “In 24 hours more than 8,000 tons of accumulated garbage has been picked up from streets and random dumps,” Machnouk said during a chat with activists.

“This is an indicator of the seriousness of the execution of the garbage plan; things will speed up as the process continues.”

The Cabinet reopened the Naameh landfill for two months Saturday in line with its plan to end the trash crisis, which also stipulates the establishment of landfills in Burj Hammoud and Costa Brava, both suburbs of Beirut. Sukleen trucks began removing piled garbage from Karantina and heading to Naameh.

The plan has been met with widespread criticism amid allegations that it infringes on the Barcelona Convention, which bars the establishment of landfills along the Mediterranean coast.

The closure of the Naameh dump last summer kicked off the country’s garbage crisis. Residents of areas surrounding the landfill say they have lost all faith in the Cabinet and do not trust Agriculture Minister Akram Chehayeb, who has insisted that, as outlined in the plan, the landfill will only be reopened for two months.

“It is all lies,” Abed Fakhreddine, a resident of Naameh, told The Daily Star as he smoked in the roadside shack that he had built himself. “We do not trust the state’s word when it comes to anything ... but there is nothing we can do about it for the time being ... we just want the garbage gone from our home.”

“And the flies!” his friend Mohammad Mezher chimed in. “My God those flies, some are the size of my fist and they are all over the place ... and in March! This is unheard of.”

Despite threats from locals that they would not allow garbage trucks to enter the landfill, would-be demonstrators ultimately acquiesced, saying nothing could be done. “The trucks came in with a heavily armed escort, they had Army units with them, Internal Security Forces in full riot gear, tanks and water cannons,” Fakhreddine said.

“A political decision has been taken,” Khaldoun Mezher said, nodding solemnly. “If we had demonstrated we would have been either killed, badly wounded or arrested ... and we would have achieved nothing.”

They claim that the state no longer cared about their fate, and neither do other Lebanese. “We have been suffering the nation’s garbage for 18 years,” Mezher said. “People outside of Naameh did not even suffer for a year.”

The young men lamented the reopening of the landfill. They say the area has a higher incidence of cancer, which it would not have suffered had they received compensation for the establishment of landfills in their hometown. “Sukleen doesn’t employ us at the landfill, we have to pay for their sweeping and trash pickup services ... they haven’t done a thing to properly develop the area,” Fakhreddine said.

They said they feel betrayed by the myriad civil society organizations that sprung up in the wake of the crisis.

“Where were they when the time for action was upon us?” Mezher said. “They didn’t come because the garbage isn’t at their front door anymore and they don’t care where it ends up.”

At an adjacent barbershop, Malek, who refused to disclose his last name, summed up the situation: “I will tell you one sentence, and this would sum up our existence as Lebanese citizens: sheep like this require such a shepherd,” he said. “Our neighboring sheep reverted back to their shepherd and now we have to pay for it.”

Malek grew more furious and animated as he described the woes that have befallen the town ever since the landfill was set up. The barber, Khalid Mezher, struggled to keep his client under control. “Be still or I will cut you ... and stop discussing the landfill, every time you do your [blood] pressure goes up, and I am not calling your wife and explaining to her how you ended up at the hospital,” he said. “I will explain.”

Khalid Mezher said he was most surprised by the level of security that accompanied the landfill’s reopening. “First they had a mock attempt and only sent in seven trucks, at around 4:30 a.m. Saturday,” he said. Friday, Sukleen announced that waste collection and dumping would begin at 6:30 a.m. “Trucks came with an armed escort and they had elite Army and ISF units with them. When they discovered that no one was going to stand in their way, they let the other trucks go through.”

He went on to describe what seemed like a theater of war. “They put the Army at the beginning of the road while elite ISF units waited at the back,” he said. Khalid Mezher was shocked by the tractors hauling in the garbage. “They weren’t even covered or sorted, just piles and piles of rubbish, when it rained the entire thing oozed onto the street and into the surrounding forest.”

While no protesters tried to block the entrance to the Naameh landfill, angry young men set a Sukleen truck on fire in the town of Aramoun.

Abandoned by their peers, wallowing in garbage, and beset by political foes, Naameh’s young men confessed their utter exhaustion with the garbage ordeal. Yet they vowed to ensure that the dump will only stay open for 60 days. “If it is still open then we will have problems,” Khaldoun said. “Blood will soak the streets, and we will force its closure because then it becomes a matter of dignity.”