Published July 4th, 2022 - 06:26 GMT
A picture taken on July 3, 2022 from the Israeli Kibutz of Baram, shows the flags of (L to R) Lebanon, Hezbollah and Palestine swaying in the wind on the Lebanese side of the border with Israel.
Highlights
Lebanon and Israel expected to reach a demarcation agreement 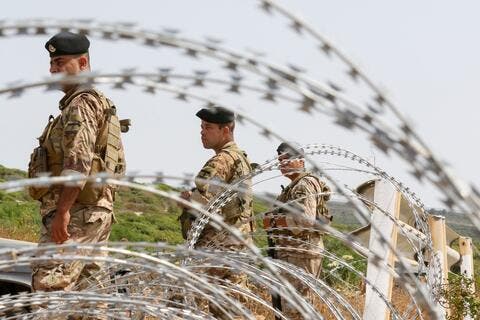 Lebanon Battles to Preserve its Gas Wealth Amid Dispute With Israel

Bou Habib made the announcement in remarks to LBCI television.

The statement comes a day after Hezbollah sent three unarmed drones towards an Israeli gas rig in the Karish field, in what it said was a reconaissance mission over "disputed" territory.

Lebanon's top diplomat said Sunday that he expects his country and Israel to reach a sea demarcation agreement in September. https://t.co/RtcfD7DWbI

Hezbollah also said that the launching of the drones was aimed at sending a "message" to Israel.

Hezbollah's move appears to be an attempt to influence U.S.-brokered negotiations between Israel and Lebanon over their maritime border, an area that is rich in natural gas.

Israel last month set up a gas rig in the Karish field, which it says lies within part of its internationally recognized economic waters. Lebanon has claimed it is in disputed waters.

The U.S. last week said that mediator Amos Hochstein had held conversations with the Lebanese and Israeli sides. "The exchanges were productive and advanced the objective of narrowing differences between the two sides. The United States will remain engaged with parties in the days and weeks ahead," his office said in a statement last week.

#Lebanon’s militarized #Shia duo (#Hezbollah and #Amal) undermined every attempt at maritime border demarcation agreement with #Israel for more than a decade.

The ruling klepto-oligarchy enabled both.

Now, the plan is clear: give #Hezbollah a new mission statement. https://t.co/QVXhq3fHnh

Lebanon and Israel, which have been officially at war since Israel's creation in 1948, both claim some 860 square kilometers of the Mediterranean Sea. Lebanon hopes to exploit offshore gas reserves as it grapples with the worst economic crisis in its modern history.

On Saturday, careraker Prime Minister Najib Mikati told reporters that Lebanon received "encouraging information" regarding the border dispute but refused to comment further saying Beirut is waiting for the "written official response to the suggestions by the Lebanese side."