Published October 6th, 2021 - 06:29 GMT
Libya's President Mohammad Younes Menfi is pictured as he reviews a guard of honour during his meeting with German President at the Bellevue presidential palace in Berlin, on October 1, 2021. (Photo by John MACDOUGALL / AFP)
Highlights
legislative elections will be delayed for 30 days after presidential elections

The Libyan House of Representatives on Tuesday announced delaying the legislative election after 30 days from the presidential elections. 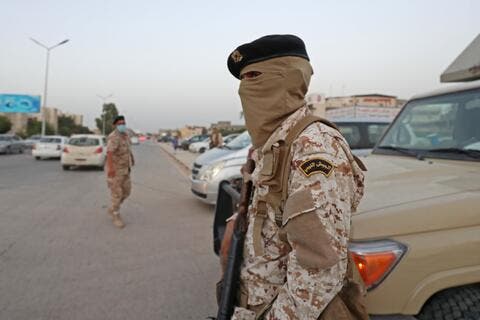 The council's spokesman Abdullah Blehaq said on Facebook that the parliament during its session on Tuesday approved "holding parliamentary elections 30 days after the election of the president of the country."

According to a roadmap sponsored by the UN, the parliamentary and presidential elections are scheduled to be held simultaneously on Dec. 24.

The election laws in Libya differ at the House of Representatives, High Council of State, Government of National Unity, and the Presidential Council.