At first, news outlets reported of a coup attempt that was thwarted, before centering around a more general narrative of a scandal inside Jordan’s royal family.

With the news came a raft of anointed experts jostling to have the most relevant analysis surrounding the event, which itself remains mostly shrouded in mystery by a gag order and an internal royal family procedure that is tasked with mediating the dispute. This hasn’t stopped analysts and observers’ speculation of international involvement, mostly from Saudi Arabia and Israel, and with fine-grained ethnographies of Jordan’s inter-tribal dynamics and how they might be playing a foundational role in this political crisis.

These are understandable, since nearly every major political decision in Jordan involves powerful international actors, and its numerous tribes have been the political backbone of the state.

But both of these approaches take cues from a security-oriented worldview, which prizes maintaining the stability of the region due to its un-ending geopolitical significance to the global North, including Europe and the U.S.

A disruption in Jordan, which is a long-time partner to the West and a country designed to be a kind of ‘zone of stability’ in an otherwise tumultuous region, is an immediate concern to the security-minded analyst and the states that rely on Jordan to be a political non-factor. In this sense, the government taking repressive actions are wrong because they threaten to up-end the geopolitical stability of the region and not because they are a moral harm against people.

This analysis leaves a critical question out and cannot be relied on to resolve the underlying issues driving the state to feel the need to act in the way it has. This question is obvious and simple: what are the conditions of life in Jordan?

The Silent Suffering in Jordan

Currently, the people of Jordan are being driven towards mass impoverishment, and are seeing the prospects of a stable future collapse underneath them. Jordanians and Palestinians alike are suffering through a slow economic collapse. The cost of living has been steadily rising for years, unemployment is skyrocketing, remittances are falling due to the pandemic as is foreign direct investment, and there are few reasons for optimism in the near-future.

People are being pushed towards the margins of sustenance, and if this downward trend continues, millions will struggle to find the cash needed to house, feed, and clothe themselves and their families.

The tinge of desperation and of intolerance to the status quo can be felt at every level, from the increasingly aggressive criticisms of the government from tribes and civil society groups all the way up to King Abdullah II, who in mid-March spoke out directly against widespread corruption and negligence in a remarkably candid speech. His scathing critique of the general state of the country came after a lack of oxygen in an Salt hospital led to six preventable COVID-19 deaths, which spurred a series of anti-corruption and anti-lockdown protests. Earlier, he was seen at the hospital angrily confronting its administrators on their mismanagement.

It is this rising sense of intolerance to the country’s material conditions that pushes people into the streets, elbows tribes anxious of their tenuous footholds towards more direct actions, and incentivizes the state to double down on a security-first mindset to contain the resultant unrest.

In this light, the Prince Hamzah controversy merely illustrates that the tension is accelerating, the stakes are getting higher, and that the status quo cannot be held together forever with police tape.

Prince Hamzah, a broadly popular royal family member in Jordan, had been openly critical of the state of Jordan’s government, stating on camera that “even to criticize a small aspect of a policy leads to arrest and abuses by the security services.”

“It’s reached the point where no one is able to speak or express an opinion on anything without being bullied, arrested, harassed and threatened,” he added. After a few days, Hamzah released a statement reaffirming his loyalty to the King and his general commitment to the security and prosperity of Jordan.

The security issues Hamzah critiqued have largely come from state-led crackdowns against those organizing for better wages, lower taxes, and an end to the austerity measures the government has adopted under pressure from the global financial market to resolve its ballooning debt. The passage of Jordan’s broad ‘cybercrime’ bill, which human rights advocates decried, came as thousands were regularly pouring into the streets to protest the government’s raising of taxes and the price of basic goods and utilities.

Most notably, the government dissolved the country’s teachers’ union, arrested its leaders, and issued a gag order on covering the widespread protests after the union released a plan for a national pressure campaign to secure higher pay in the summer of 2020. The demonstrations against the government’s actions brought parts of the country to a complete standstill. The only accommodation the state felt it could afford the teachers, who wanted higher wages, was a jail cell.

Thus far, the state has concluded it is cheaper to mobilize the riot police to face off against protesters and organizers than to agree to their demands. 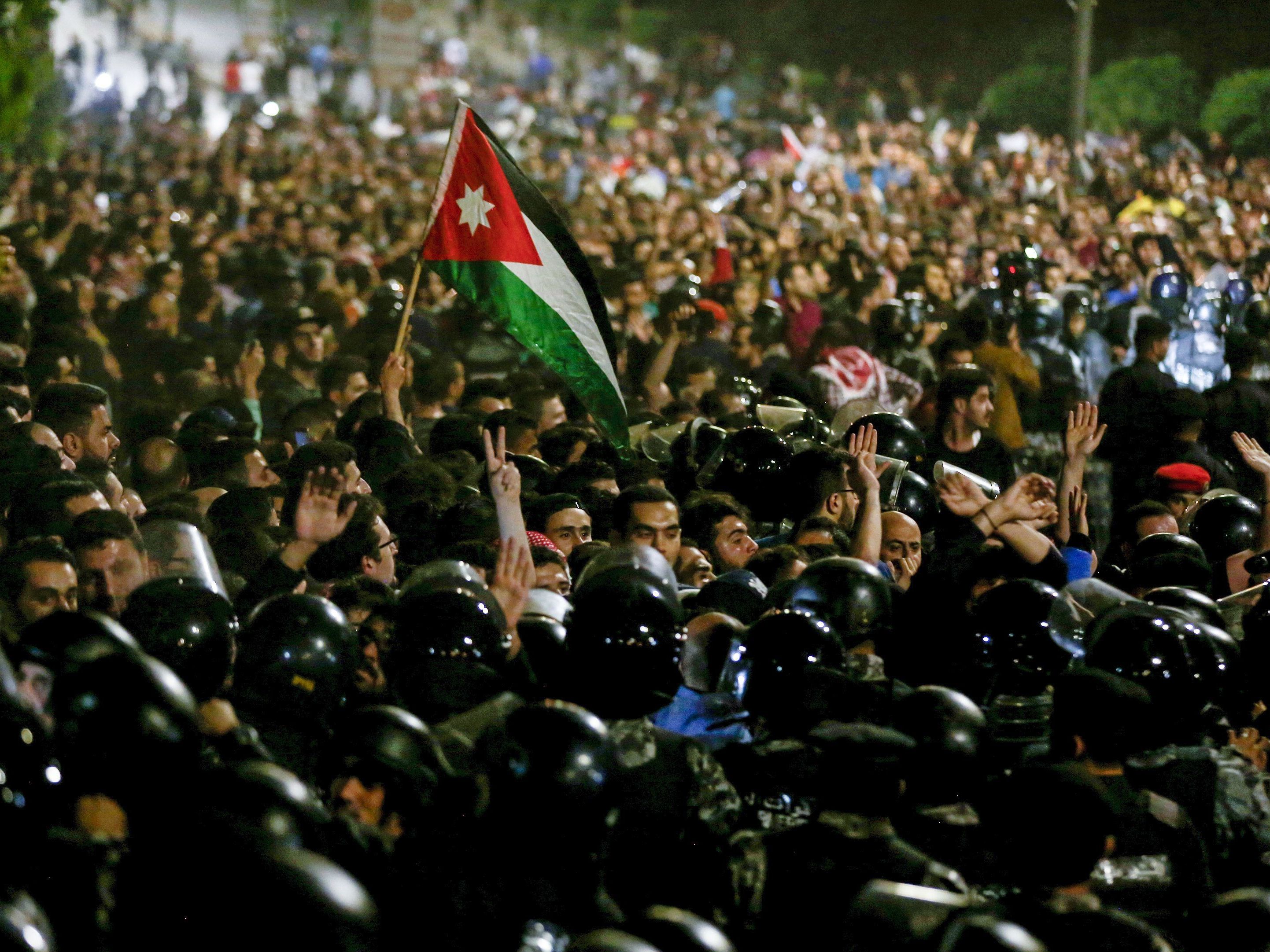 Jordanians protest against austerity measures in Amman in 2018 (AFP/FILE)

From the perspective of the state, if it were to disavow its austerity policies by lowering the price of bread, fuel, electricity, and housing, and mandate a living wage to each worker, it would have less need for a strong-armed police force but would also need to quickly run to sovereign lenders like the IMF, World Bank, and the myriad private creditors, to finance these moves.

And of course, it is these very same actors who are pushing Jordan towards austerity in the first place in the hope their lines of credit toward Jordan will be eventually repaid. Jordan cannot rely on the same model of economic development deployed in other post-colonial states like those in Latin America, whose nationalization of key industries provides the government with enough revenue to fund a robust public sector. The small desert country lacks the natural resources to rely on them for a public budget.

For those analysts who are so deeply concerned with the region’s security, they would do well to pay attention to the reasons the state is deploying the police

If Jordan simply defaulted on these debt payments, it would be summarily ousted from the global borrowing market entirely, leaving its economy in shambles and virtually guaranteeing a popular revolt. Thus, the state must stage an impossible balancing act between the two powerful forces: on one end, there are Jordan’s people, who demand a prosperous life, and on the other end, there are the austerity-minded financial institutions, who insist Jordan cannot afford to provide its people with prosperity.

Jordan is discovering that it’s getting harder to placate them both, so the state has been relying on the police to wrestle the former and has been engaged in an aggressive years-long push for international investment and sovereign aid to satisfy the latter.

Prince Hamzah’s comments are one in a long line of past and future crises that all revolve around the question of who has more power and sway in this balancing act, who is able to tip the scales to their favor, and how will the other side respond. Though his saga is over for the time being, there will be another one in the coming months.

For those analysts who are so deeply concerned with the region’s security, they would do well to pay attention to the reasons the state is deploying the police, and monitoring the country’s press and social media. Allied and neighboring countries must also pay greater attention to their role in forcing Jordan’s economy to twist itself around servicing external debt rather than its people.

If the country’s woes continue, and its people feel they have less to lose by trying to push for economic justice, anti-riot barricades, internal royal family mediations and a gag order on the local press may be enough to stave off the unrest.

The views expressed in this article are those of the author's and do not necessarily reflect the position of Al Bawaba.

Flydubai: All 737 Max Jets to Be in Service by June