Macron Vows For a 'Stronger France' After Being Reelected

In an official ceremony at his official residence, French President Emmanuel Macron was inaugurated on Saturday afternoon for a second five-year term. 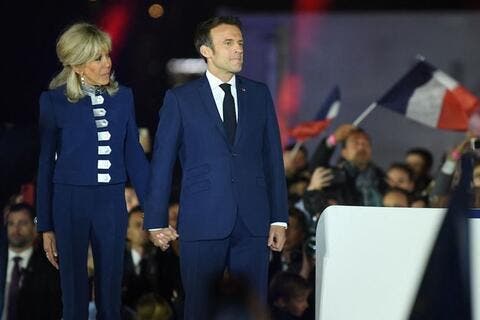 Macron's Win Does Not Mean a 'Happy France'

Macron last month was reelected in a runoff against far-right candidate Marine Le Pen with 58.2%, making him France’s first president in 20 years to win a second term.

The morning ceremony kicked off with Laurent Fabius, head of the Constitutional Council, officially confirming Macron’s victory, followed by the swearing in.

In an inaugural address to a crowd of 450 government officials, dignitaries, and supporters – including former presidents Francois Hollande and Nicolas Sarkozy – Macron delivered a 10-minute speech suggesting that “this time will be different, I promise,” as many who gave him a second term were still disappointed with the first.

His biggest emphasis: Unity. Macron vowed to build “a stronger France” in the immediate future, pledging to boost employment and jobs as well as confront the domestic problems of social justice and class and the climate change crisis.

“The French people have entrusted me [with a second mandate],” he said. “I know I have to live up to it. It’s a fragile trust, our values of liberty are under challenge.”

Macron is faced with a populace that feels divided and myriad challenges, most notably tackling the rising cost of living and the inflation gripping many European countries due to not only COVID-19’s lingering fallout but also the war in Ukraine. He vowed further to serve the country with “respect” and “consideration.”

Meeting the ecological and environmental concerns in France and developing renewable energies into a powerful part of the national economy also topped his agenda.

“I vow to build a planet that is more liveable, a France that is more alive, and a stronger France,” Macron said.

His second term comes amid France’s turn as president of the European Union, which has its fair share of responsibility. The rotating role is one where Macron is not just a mouthpiece but should be present everywhere, and effective. Stability in Europe, Macron knows, is one of the most universal concerns, especially with an ongoing war.

Macon also has the weighty task of winning a majority in the legislative elections set for June 19. A new coalition of the France Unbowed, Socialist, Communist, and Green parties was formed this past week to mount strong opposition to Macron and his La Republique En Marche (Republic on the Move) taking a foothold in parliament.

French President Emmanuel #Macron on Saturday vowed a new start to face immense challenges in foreign and domestic policy, as he was inaugurated for a second term after his election victory over the far right.https://t.co/zUmvVKJFZ6

Not far from the Elysee Palace, 21 cannon shots were fired at Les Invalides, France’s military memorial complex where Napoleon is buried. The tradition dates back to the Middle Ages to commemorate the inauguration of a new leader. Later Macron reviewed the troops while the Marseillaise, France’s national anthem, played.

The president’s second term will begin officially on Friday, May 13, when the first one ends at midnight. He will then name a new prime minister to replace Jean Castex, along with many other government officials who will step down. It’s customary to do so in France to signal the changing of the guard and a refreshed mandate.