Published August 16th, 2021 - 07:34 GMT
Malaysia's Prime Minister Muhyiddin Yassin waves as he arives at the National Palace in Kuala Lumpur on August 16, 2021, as he was expected to quit after just 17 months in office. (Photo by Arif KARTONO / AFP)
Highlights
The PM Muhyiddin Yassin has submitted his resignation to the king after 17 months in office.

Reports said Prime Minister Muhyiddin Yassin has handed over his resignation letter to the king Abdullah of Pahang on on August 16, 2021 following his lose to the majority in Parliament. 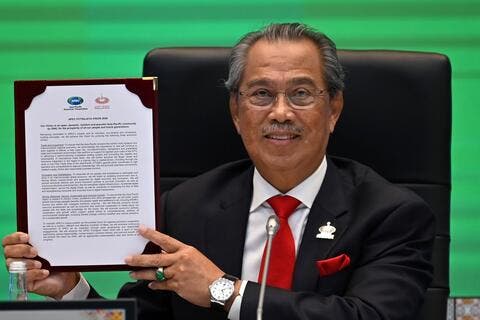 Is Malaysia’s Prime Minister About to Quit?

A cabinet minister revealed earlier that Muhyiddin will send a notice to the king on Monday, saying that he will stop his work as the premier.