Women Leaders at the Heart of Sustainable Development in Libya-UNDP

Women and girls represent half of the world’s population and therefore also half of its potential. Gender equality is a goal in its own right but also a key factor to achieve peaceful societies, with full human potential and social development.

In Libya, women have been at the heart of the country’s development as educators, innovators, healthcare workers, caretakers, law enforcers, changemakers and leaders.

Young women have been taking part in entrepreneurship initiatives bringing innovative solutions to the table in Libya. Leveraging their diverse expertise has been critical to promoting the independence and dignity of women in Libya and to investing in sustainable solutions for a brighter future for the country.

UNDP Libya, with funds from the European Union and in partnership with Tatweer Research, created the Tatweer Entrepreneurship Development Campus (TEC), which achieved significant strides towards its overall objective of fostering a vibrant entrepreneurial ecosystem to encourage sustainable job-creation in the private sector, for both men and women. 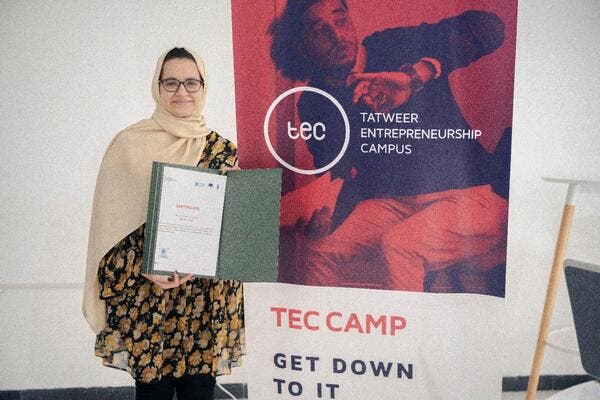 In 2018, Aziza Al-Hassi, Tufaha Suhaim and Amine Kachroud took part in TEC and together, the three entrepreneurs create “School Connect” which later became “Panda” to connect teachers and parents to follow up on their children’s behavioral and academic performance. 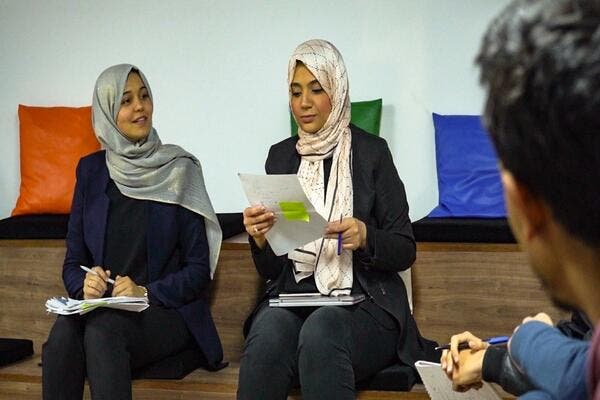 In 2020, when the COVID-19 pandemic forced Libya to suspend in-person education, the founders of “Panda” quickly adapted and expanded the features of their app to host electronic academic content so that students could learn online.  Panda has provided job opportunities to 17 employees.

“Our company hopes, in the long run, to become a standard for educational technology in the country and the region," says Tufaha. 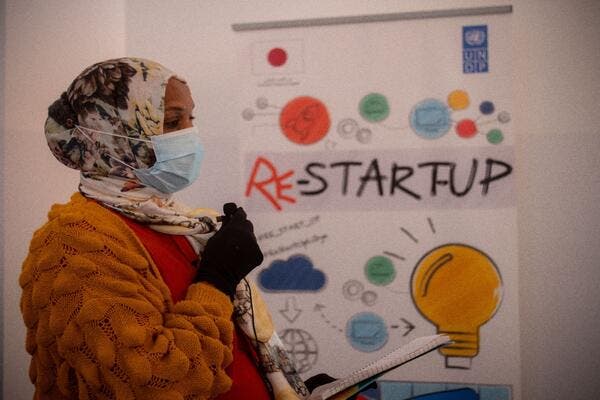 December 2020, Tawargha (Libya). One of the entrepreneurs from Tawergha presents her business idea during the Re-Start-Up Marathon. Photo: ©UNDP Libya/Malek Elmaghrebi

With support from the Government of Japanb, UNDP launched Re-Start-Up Marathon to supports entrepreneurs to re-establish businesses, increase employment, and promote social peace, stability and sustainable economic recovery in Libya. As a result of the competition, many women were selected as entrepreneurs, such as:

Women at the forefront of the COVID-19 response

The COVID-19 crisis has highlighted the centrality of women’s contributions to the healthcare sector in Libya. 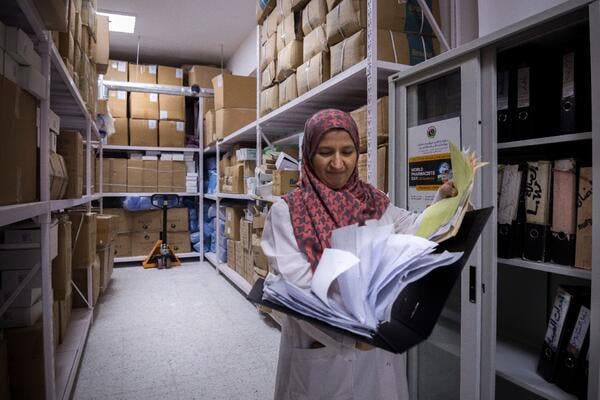 In Tripoli’s Jalaa Maternity Hospital, Dr. Asma Ali Elghoudi is the Head of the Medical Supplies and Equipment Department.

“I am part of the team and I lead by example,” she says. “I don’t see any difference between women and men to do my job. You just need to have the knowledge, the will and the courage to be a role model for the team.”

As the pandemic spread across the globe and reached Tripoli, Jalaa Maternity Hospital which was renovated by UNDP’s Stabilization Facility for Libya (SFL), was designated to testing COVID-19 patients and providing them with critical health assistance.

Despite the strains inflected on the hospital due to a significant demand for healthcare, Dr. Elghoudi led her team effectively, and with passion and dedication she was able to provide up to standards services. 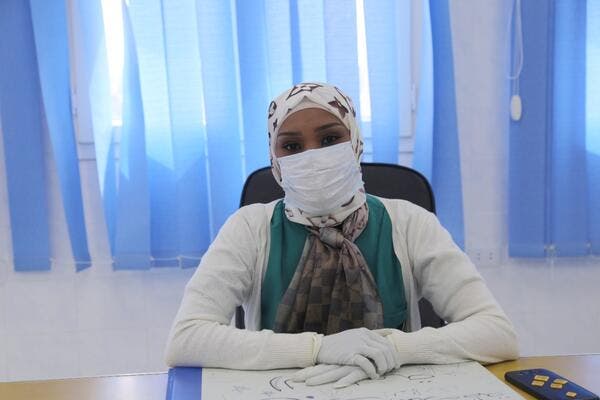 Dr. Bouthina Ali Elfaitouri is a surgery doctor at the Sabratha Teaching Hospital. She has been working in the Emergency Department for five years. She knows from experience how important it is to have effective medical services and how they can be crucial in saving lives.

''We went through bad times when we did not have anything in the Department and we were asking patients to bring gloves, medical bundles, injections and whatever might be needed in case an operation was necessary,'' said Dr. Bouthina.

UNDP with the support of the EU rehabilitated 10 health facilities across Libya, allowing 800,000 people access to quality healthcare services and rapid response to COVID-19 threats.

The renovated Emergency Department at the Sabratha Teaching Hospital is now receiving patients in better conditions and medical staff is proud to work in this improved environment. 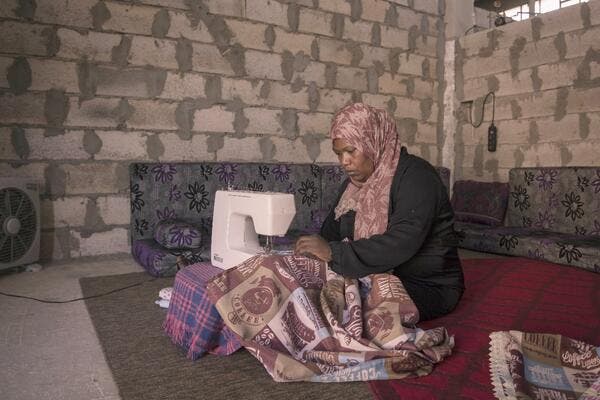 Gender inequality persists through uneven income and unequal divisions of labour. During the pandemic especially, women have been harder hit than men, losing income and leaving the labour market at a greater rate.

In Libya, especially due to the conflict, women have been striving for economic independence to empower themselves and elevate their mental well-being. Balancing the control of economic resources within the household in its turns helps reduce Gender-based violence.

UNDP helped establish a Mental Health and Psycho-Social Support center in Tommina, a town between the two war-torn cities of Misrata and Tawergha.

Women from the two cities go to the center searching for psycho-social support, to study, and some have even built partnerships for joint businesses and social initiatives.

“Now I have a source of income from sewing and I can pay for my living and provide food and clothes for my daughters,” says one of the women visitors of the center. “I would like to become a businesswoman and that is why I am studying to gain skills to develop my own project,” she adds.

While more women are leading in public life and there has been progress in women’s representation at different levels, in Libya this progress has been too slow. Women still remain significantly underrepresented in all aspects of decision-making, including executive, legislative and administrative positions.

UNDP works in Libya to amplify women’s voices and promote women’s equal participation and leadership in all forms of decision-making, including in public institutions, parliaments, police, and the judiciary. 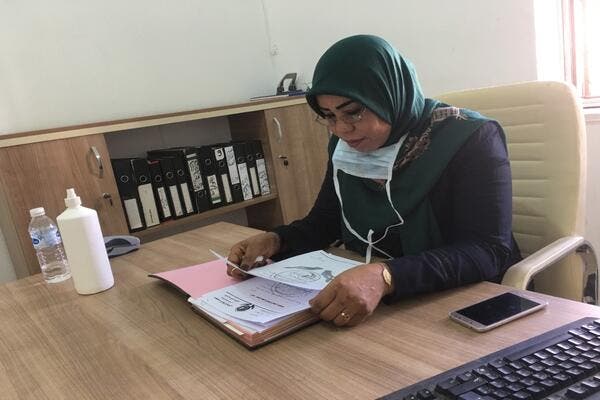 ''Now, it is easy for women who are living near the newly lit streets to move around and do shopping at night without fear. We are grateful to all who are helping us to have projects that have a direct impact on people and meet their most urgent needs,'' said Ms. Um El Eid, member of Ubari Municipal Council.

The UNDP’s Stabilization Facility for Libya (SFL) installed a 11 km solar street lighting system at the entrance of Ubari (South Libya) and other streets within the city. 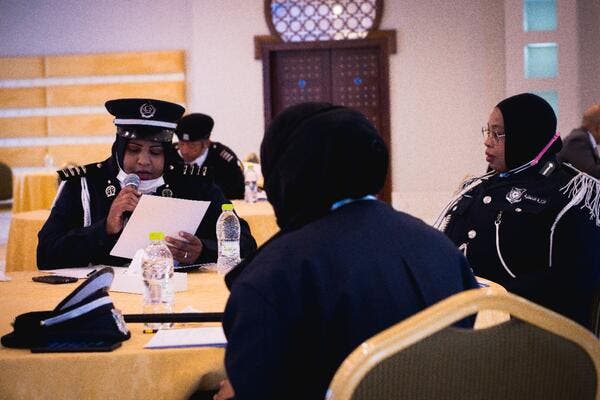 In partnership with the United Nations Support Mission in Libya (UNSMIL) and in coordination with the Ministry of Justice and the Ministry of Interior, UNDP held several workshops, training and panel discussion to enhancing the institutional responsiveness to the gender-based violence (GBV); enhancing the role of women in Libyan law enforcement institutions; and strengthening women’s access to justice in Libya. 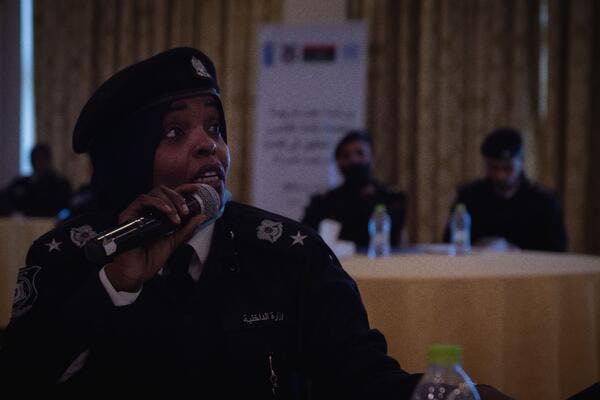 Lieutenant colonel Noura Al-Said Muhamed says, “I see some solutions to reduce violence against women. For example, formulating a preventive approach, enacting laws that deter perpetrators of violence in all its forms, and activating family counseling in courts. It will also work that women know how the law protects them if they are exposed to violence". 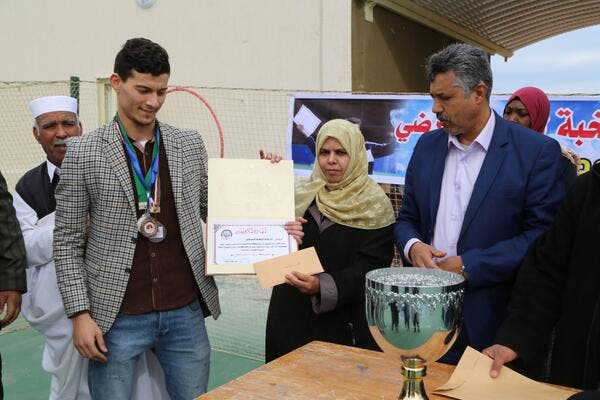 ''Women in Sabratha want to play sport, including tennis, and the renovation of the courts have motivated them,'' stated Ms. Hamida Abu Algasim Ewshah, member of Sabratha Municipal Council.

With support from the European Union, UNDP renovated four tennis courts and provided sport equipment at the Tennis Academy in Sabratha.

Despite still facing barriers related to social norms, the rehabilitation of the four tennis courts has opened new opportunities for women to practice tennis.

“The Academy is still mainly for men, but after the rehabilitation, something has already changed. One day per week, the courts are exclusively for the use of young girls and women,” explained Hamida.. 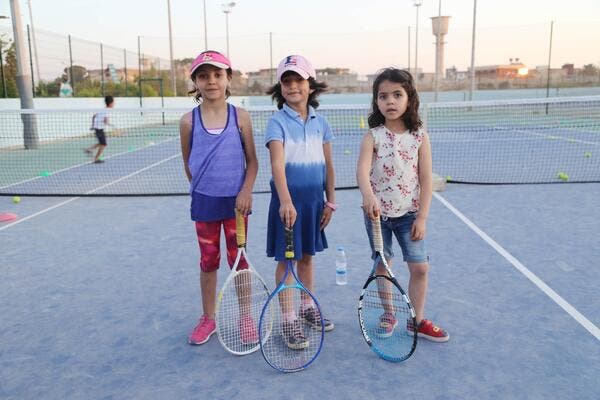 April 2020, Sabratha (Libya). Girls learn how to play tennis at one of the tennis courts in Sabratha rehabilitated by UNDP with support from the European Union. Photo: ©UNDP Libya/Abdullah Hussin.

Educators of the future 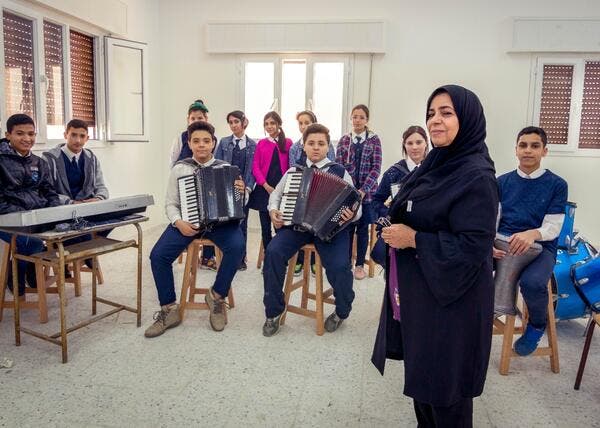 UNDP’s Stabilization Facility for Libya built a space for extra-curricular activities at the school which has provided the space for Ms. Al-Tabal to continue teaching.

"During all those years, my great wish was to train my students in a proper music classroom at the school," says the teacher. "I cannot describe how happy I am to finally have this space. Everything changed for good.”

Today, the increased capacity at the school has inflamed her passion even further and she continues to pass the gift of music to her students. 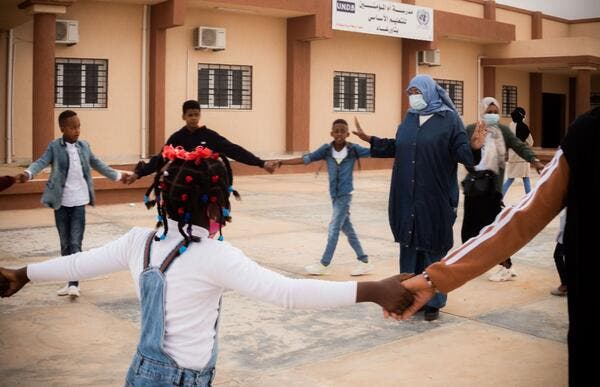 "The games that we provide to children are not only for entertainment, but also to cover other dimensions. For example, we can understand and analyze the personality of a child and act when one is going through psychological disturbance," says Ms. Salima Khamis, teacher in Tawargha, where UNDP’s SFL completed renovation of three educational institutions.

In times of Covid-19 pandemic, schools were closed as a preventive measure, but Salima and her team took advantage of the newly renovated buildings to conduct activities aimed at providing psycho-social support to the returnee's children.

"At the beginning, I used to offer these programs to children in the camp in which we previously resided, and when the schools were renovated, we provided our programs there," she explains. 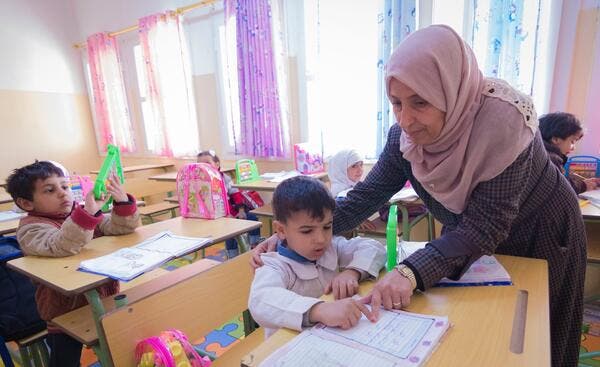 Fatma Ali Mohammed dedicated 19 years to teaching elementary Arabic at Al Maaifa School in Kikla. In 2014, when clashes intensified in the town, she left for Tripoli along with her family and most of the community members. Two years later, when they decided to go back to their hometown of Kikla, they found everything plundered, and the school ransacked.

UNDP’s SFL renovated the facility and provided a range of school furniture and basic equipment to improve the learning environment for the returning students.

Fatima says, "the situation changed with the availability of new equipment and furniture, which are essential for the continuation of the educational process.”

“It is not just the students that are benefitting from the improved facilities. The teachers find themselves inspired as well,” adds Fatma.

Women as leaders of change

“I am very thrilled that we have contributed new seeds of art and beauty in our city Sebha,” says Aisha Rajab, Project manager at Athar Org.

UNDP in Libya continues to work with diverse partners including civil society, government counterparts, the private sector and academic institutions to respond to the diverse needs of women and girls across Libya and value their role as leaders of change.

“We shape or Future” is an initiative launched by UNDP and UNWomen which aim is to empower grassroots organizations working to support women internal displaced persons (IDPs) and youth including migrants all around Libya. Through “We Shape our Future”, 12 organizations received a grant of up to $US15,000 to implement their activities which focused on women empowerment, economic recovery and GBV.

In the long term, the project is looking forward to building new partnerships to continue supporting women and youth civil society organizations working for women and youth, including IDPs and migrants.

Jordan Baja to Get Under Way Today