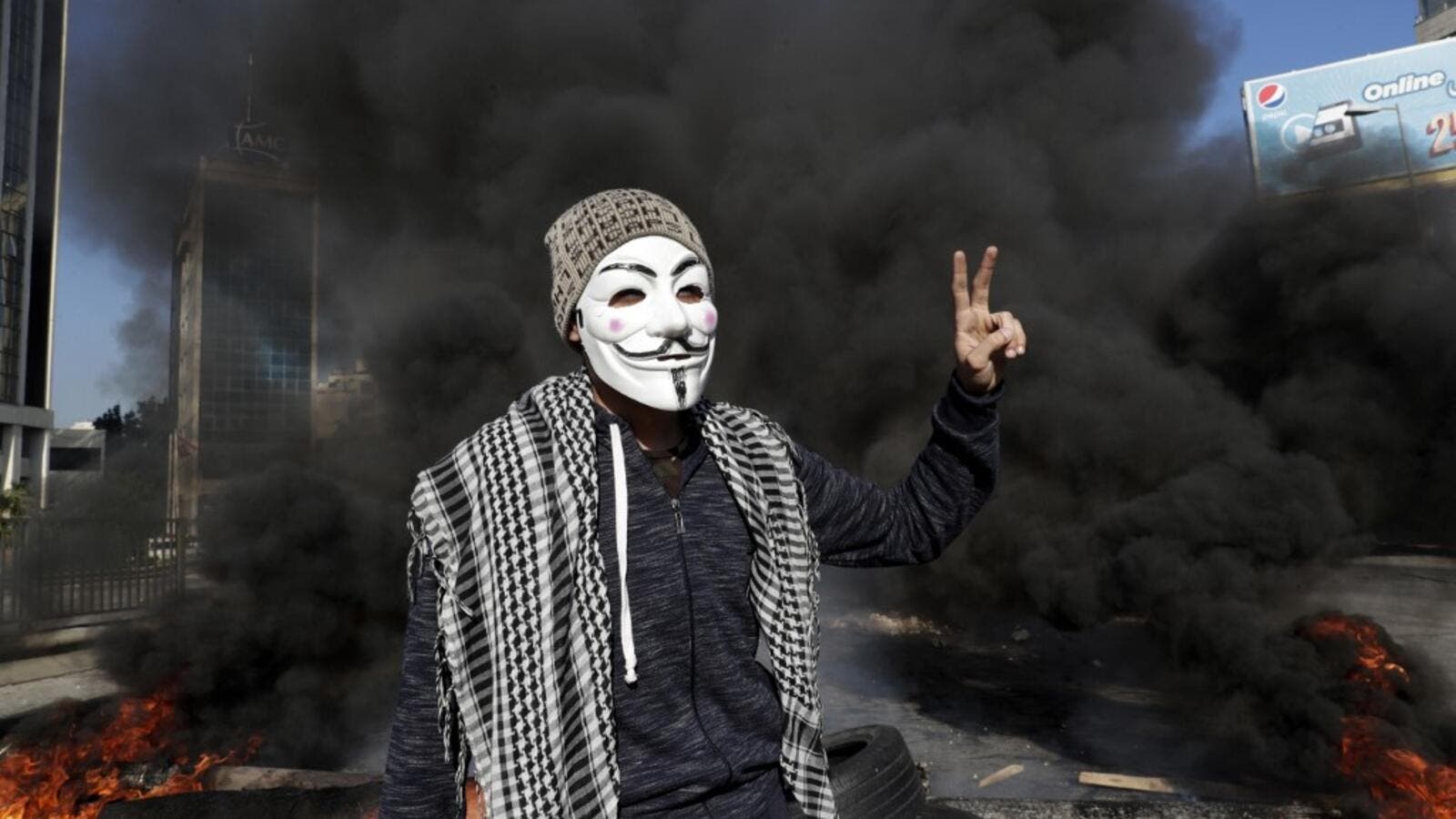 Lebanese anti-government protester flashes the victory sign in front of a burning roadblock during a demonstration in Beirut on January 14, 2020. (AFP/ File Photo)

Lebanon's President Michel Aoun said on Tuesday that "obstacles" had prevented the formation of a new government which was expected last week.

His remarks coincided with the re-eruption of mass protests against the country’s ruling elite over their rampant corruption which has seen the country plunge into its worst economic crisis since its 1975-90 civil war.

Demonstrators returned to the streets on Tuesday for what they described as "a week of anger" that they hope will put pressure on political leaders.

Protesters burned tires and blocked three main highways leading to the capital from the south, east and north, bringing traffic to a standstill. School and university students took part in some of the protests and hundreds marched down main highways, raising Lebanese flags and blasting rallying songs through loudspeakers.

In Beirut, dozens rallied outside the Central Bank, chanting against the governor and his financial policies. Security forces separated the protesters from the bank's entrance.

In the northern city of Tripoli and in Akkar province, protesters sat in the streets and blocked several roads with burning tires or bricks. In the southern city of Sidon, dozens of protesters marched down the streets, rallying outside banks and government offices.

Lebanon is facing its worst economic crisis in decades, with the local currency plummeting before the dollar, losing over 60% of its value over the last weeks while sources of foreign currency have dried up. Meanwhile, banks have imposed informal capital controls limiting withdrawal of dollars and foreign transfers in the country, which relies heavily on imports of basic goods.

Panic has set in among residents who fear their deposits are in danger. Nationwide protests for three months have failed to pressure politicians to form a new government to institute drastic reforms.

The protesters returned to the streets after several weeks of relative calm, following the designation of Hassan Diab as prime minister in mid-December. But he has so far failed to form an emergency government amid political divisions and jockeying for power. Prime Minister Saad Hariri resigned in late October.

“I would like to know why they (politicians) are still keeping their seats,” Elie Zoghaib, a protester said.

Lately, protesters had focused their ire on banks, rallying at the premises or outside banks and demanding access to their deposits.

Dozens have also taunted politicians who showed up in shopping malls or restaurants, sometimes chasing them out of public places and decrying their failure to address the economic crisis.

Nationwide protests began in mid-October in Lebanon, denouncing years of government mismanagement and corruption, demanding the political elite to step down.