Published March 14th, 2022 - 08:50 GMT
A giant figure representing Russian President Vladimir Putin swallowing a map of the Ukraine is seen during a demonstration against Russia's invasion of the Ukraine, on March 13, 2022 in Berlin. John MACDOUGALL / AFP
Highlights
Russia forces continue to arrest protesters against Ukraine invasion

Russia has continued to arrest protesters against the Ukraine invasion as tens of thousands of protesters demonstrated in cities across Europe on Sunday. 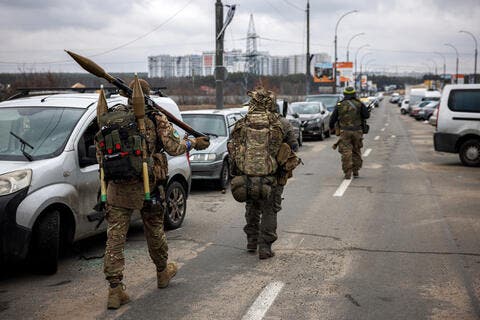 Two Killed in Strike on Residential Building in Kyiv (AFP)

The extent of protests in Russia has been difficult to document since Russian President Vladimir Putin approved laws criminalizing speaking out against the Russian military and targeting journalists who report what the government considers to be "false news" about the invasion.

OVD-Info, an independent human rights watchdog in Russia, has reported that there were at least 866 arrests on Sunday and that there have been more than 14,000 people detained in cities across the country for anti-war action since the start of the invasion on Feb. 24.

In Novosibirsk, Russia, local residents are marching in protest against the Russian invasion of #Ukraine:pic.twitter.com/1bMHOIpuG9

Luka Zatravkin, the son of artist Nikas Safronov, was arrested in Moscow on Sunday for handcuffing himself to the entrance of a McDonald's restaurant while blaming Russia for their departure from the country, according to OVD-Info.

McDonald's and Starbucks announced Tuesday that they would close all of their locations in Russia over the ongoing "humanitarian crisis" in Ukraine. McDonald's has more than 800 stores in the country after becoming the first American chain restaurant to open during the end of the Soviet Union.

"Now we are being deprived of the very ideas of democracy and the values of human rights, showing that freedom is a fiction. Because politicians from world powers can take away our freedoms with the stroke of a pen," Zatravkin said in a post to Telegram.

"This is a real genocide of the common people, who are going to create unbearable living conditions. Because along with violent prohibitions, all our moral and social postulates collapse."

Another man, a resident of St. Petersburg, was arrested for "Putin is a fascist!" messages at a war memorial honoring soldiers who died in the siege of Leningrad during World War II.

In a series of press releases, the Ministry of Internal Affairs in Russia has noted that those arrested and charged have all been found guilty of their offenses.

Bernard Smith, a reporter for Al-Jazeera, said in a report from the outlet that "it's very difficult for people to go to the streets and protest" and that one woman was dragged away while holding a blank piece of white paper.

"Anyone trying to go out or looking like a protester has been violently dragged away," Smith said.

In the Ukrainian city Kherson, which has been taken over by Russian forces, hundreds of demonstrators protested suspected Russian plans to turn the region into a breakaway republic, CNN reported.

More than 860 Russians were detained at the protests on Sunday, bringing the total number of arrests at antiwar demonstrations to more than 14,500, according to a human rights group that tracks arrests in Russia. https://t.co/vUmPrHYlcz

Meanwhile, the nonprofit group Greenpeace estimated on Twitter that more than 125,000 people had protested on the streets of German cities on Sunday. More than 60,000 people were estimated to have protested in Berlin alone.