'Russia Will be Free': Are Moscow Street Protests a Sign of Generational Change?

Reflecting on the challenges facing opposition movements late last year, the Russian political activist Leonid Volkov argued that ‘the biggest enemy is the lack of belief that something can be changed, an idea beaten into the people for 20 years’.

Mr Volkov must be heartened by the prospects that recent events are slowly proving him wrong. On Saturday, White Counter, a crowd monitoring NGO estimated that 49,900 people took to the streets of Moscow in spite of massive police pressure for a number of weeks and clear demonstrations that security services were willing to use force to disperse demonstrators. These estimates would mark the demonstrations as the largest since the so-called Bolotnaya protests sparked by election results in 2011.

The catalyst for the wave of protests that have swept Russia since mid-July this year appear surprising. Opposition candidates, some of them affiliated with Alexy Navalny’s Progress Party were excluded from running for office to Moscow’s Duma, an institution largely subordinate to the city’s more powerful executive authority. To run for elections, candidates have to gather signatures from supporters, and signature lists of opposition candidates have long been rejected by the Central Election Commission on spurious grounds.

The catalyst for the wave of protests that have swept Russia since mid-July this year appear surprising. Opposition candidates, some of them affiliated with Alexy Navalny’s Progress Party were excluded from running for office to Moscow’s Duma

Following a meeting with the Central Election Commission’s Chairwoman Ella Pamfilova, a rejected candidate and lawyer with Mr Navalny’s Anti-Corruption Foundation, Lyubov Sobol called on supporters to demonstrate, arguing ‘we have no other choice.... We must take to the streets.’ Since mid-July protestors have flocked to Sakharov Avenue, a main Moscow thoroughfare to protest against electoral injustice. Demonstrators have remained very peaceful and Ms Sobol’s ongoing hunger strike has been well publicized on independent news networks.

Although the protests remain largely motivated by local grievances, more generalised grievances have been expressed towards Vladimir Putin’s increasingly beleaguered regime. Protestors on Saturday were recorded chanting ‘Russia will be free’, no doubt generating hand-wringing among Kremlin officials.

‘Russia will be free’

Alexey Kovalev, the head of investigations at Meduza, an independent Russian media organisation covering the events in Moscow, argues that whilst the world’s attention has recently been fixed on Moscow, ‘protests have been going on across Russia for months now: against pension reform, illegal garbage disposal and other environmental issues. People are growing bolder’.

Increasingly authoritarian policing tactics combined with lagging economic performance have led to growing dissatisfaction with the regime and a significant drop in Mr Putin’s popularity from its high point following the annexation of Crimea in 2014. The combined effect of low global oil prices and European and American sanctions have seen Russian incomes fall for five years in a row. An unpopular move to increase the retirement age by five years announced in 2018 will see the average Russian lose 900,000 rubles (9820 JOD) in benefits.

To Mr Kovalev, the recent wave of dissent has been motivated by ‘general dissatisfaction with the unfairness of the system’. According to Levada, an independent Russian survey centre, 37% of surveyed Russians support the protests in Moscow and that 27% would be willing to protest themselves. While the failings of previous activism do not augur well for lasting change in Russia, Mr Kovalev argues that the protest movement has a number of key advantages that it lacked in 2011/12.

According to Levada, an independent Russian survey centre, 37% of surveyed Russians support the protests in Moscow and that 27% would be willing to protest themselves.

In the first instance, the organs of civil society and political opposition are in a far healthier state now: ‘This time, civil society is much more organised: we have not one but several news websites specifically aimed at covering the police and the courts, tracking every arrest, making sure every arrested person has legal aid, food, and other necessities delivered to detainment centres by volunteers’. 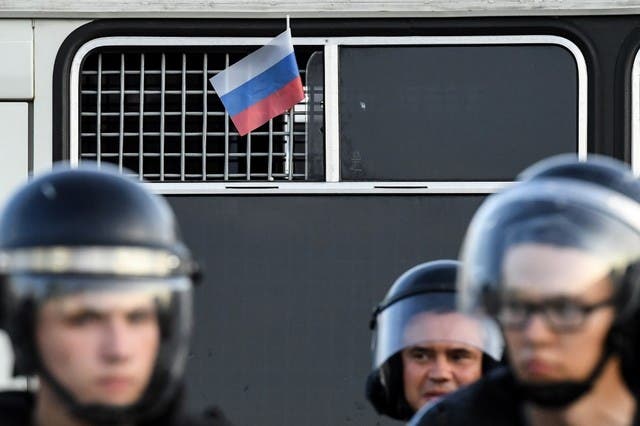 A detained protester waves a Russian flag from inside a police bus during an unauthorized rally demanding independent and opposition candidates be allowed to run for office in local election in September, at Moscow's Trubnaya Square on July 27, 2019 | Kirill Kudryavtsev/AFP

Importantly, generational change has furnished a new, bolder community of activists: People in their 20s are also not afraid of anything, unlike their fathers who still remember the Soviet Union. It makes them much harder to control through intimidation and propaganda to which they’re almost immune’. Mr Kovalev also argues that the protest movement is now ‘much more focused’ with clearer aims and ambitions than the fractious coalition that led the movements of 2011/12.

People in their 20s are also not afraid of anything, unlike their fathers who still remember the Soviet Union.

Mr Putin’s willingness to use violence to quash dissent cannot be underestimated. Police presence on the streets of Moscow increased significantly as Mr Putin geared up for a re-election campaign in 2018 and the harsh treatment meted out to allies and colleagues of Mr Navalny are testament to this fact.

The current wave of protest has been met with excessive displays of force by riot police, demonstrators finding themselves tear-gassed, clubbed and beaten back. Mr Kovalev notes that ‘police tactics are much more aggressive today...there’s even less accountability and they aren’t even bothering to follow their own laws’.

Yet the key to Mr Putin’s autocratic longevity has been a calculated admixture of force and co-optation. Police brutality and excessive repression could prove counterproductive. Perceptions of injustice may harden the resolve of demonstrators and strengthen their sense of solidarity. Whilst violence may prove temporarily expedient its effect may be to galvanise rather than disperse opposition figures.

Though Muscovites have long demanded wider political representation, economic reform and an end to corruption, an increasingly energised politics of the street may prove the breakthrough necessary to open up a path for lasting change in Russia.