Published June 13th, 2021 - 07:23 GMT
An Israeli protester dressed as Prime Minister Benjamin Netanyahu gestures during a demonstration against him in front of his residence in Jerusalem, on June 12, 2021, a day ahead of a vote on a new government at the Knesset which would end his rule. EMMANUEL DUNAND / AFP
Highlights
Premier tried to prevent rivals from forming government by raising tensions in West Bank, Jerusalem, Foreign Ministry says

Israeli Prime Minister Benjamin Netanyahu attempted to save himself at the cost of Palestinian blood, the Palestinian Foreign Ministry said Saturday. 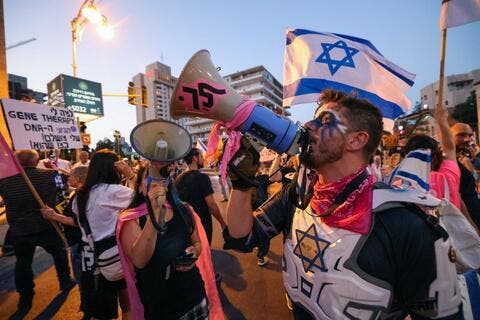 The New Israeli Government to Have a Druze Minister

Netanyahu tried to prevent political opponents from forming a government by escalating tensions in the West Bank and Jerusalem, the ministry said in a statement.

Israeli Prime Minister Benjamin Netanyahu attempted to save himself at the cost of Palestinian blood, the Palestinian Foreign Ministry said https://t.co/QQOgE2wOYs pic.twitter.com/FVi2CrHRy8

“Netanyahu and his team have been relying on the spiral of bloody violence since 2009 to defend the stronghold of the right and the radical right in the occupying state,” it said. “Netanyahu is doing all this to free himself from the guilty seat in court at the cost of Palestinian blood and the future of Palestinian generations.”

Barring a last-minute surprise, Israel’s opposition coalition is likely to get 61 votes it needs to win the confidence of the 120-member Knesset, or parliament, on Sunday.

Three centrist parties are also part of the “change” bloc. They include the There is a Future party headed by Yair Lapid with 17 seats, the Blue and White party headed by Benny Gantz with eight seats, and the Labor Party headed by Merav Michaeli with seven seats.

In addition, one left-wing party, Meretz, headed by Nitzan Horowitz with six seats, completes the bloc.

Netanyahu doesn't believe enough Palestinian blood has been shed so is planning a pro Israel rally to further inflame the situation. https://t.co/r58O5SXWJy 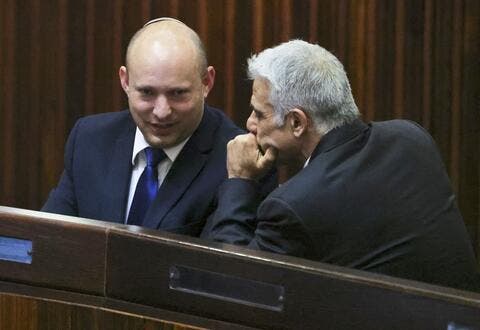 The coalition also enjoys the support of the United Arab List headed by Mansour Abbas, with four seats.

If the coalition wins the Knesset’s confidence, Bennett and Lapid will take turns occupying the premiership, with each leading for two years of the four-year term.