Is Netanyahu's 12-Year Rule About to End?

Published June 1st, 2021 - 06:34 GMT
An Israeli protester wears a mask of Prime Minister Benjamin Netanyahu and a T-shirt with a slogan reading in Hebrew: "the ceremony is over", during a demonstration to support the opposition for the formation of a government, on May 31, 2021, in Tel Aviv. Israeli opposition leader Yair Lapid today said many obstacles remain before a diverse coalition can be built to oust veteran Prime Minister Netanyahu, but voiced hope it will achieve the "greater goal". Lapid, a secular centrist, has been locked in talks with the right-wing nationalist Naftali Bennett on the terms of a "change alliance" that also hinges on an array of other parties ahead of a Wednesday midnight deadline. JACK GUEZ / AFP
Highlights
“Bennett will continue Israel's right-wing drift towards an even more militarised and racist nation-state,"

An extreme right-wing leader is on his way to lead an anti-Netanyahu coalition with partners ranging from left-wing parties to Joint Arab List. 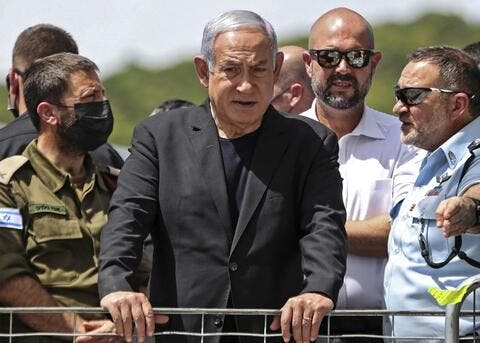 Benjamin Netanyahu, Israel's longest-serving prime minister, is facing the most potent political challenge of his lifetime, which is likely to push his Likud party into the opposition.

From some parts of the judiciary to media organisations, many powerful institutions of the country are eager to see Netanyahu lose grip on power.

Since the Likud premier ruled the country for 12 years, the "Netanyahu fatigue" combined with multiple corruption charges continue to hurt his prospects for another term.

Netanyahu's fall from grace will become certain if Israel’s far-right leader, Naftali Bennett, who is more right-wing than Netanyahu, accepts to enter a large coalition with the country’s left-wing and centrist parties including the Joint List, which is a political bloc of Palestinian citizens of Israel.

“The Israeli society is so polarized against Netanyahu, and its body politic is so poisonous that the difference between left and right in the formation of the government is now blurred,” says Sami al Arian, a prominent Palestinian-American academic.

But the prospect of Bennett becoming the next prime minister is alarming for many regional experts since his Yamina party commands only seven seats out of 120-member Knesset, the Israeli parliament. Out of seven, six members support his bid to join the anti-Netanyahu political league.

“It would be unprecedented in Israeli politics (or any politics for that matter) when the head of a party with only 6 seats out of 120 (5 percent of Knesset members) would become prime minister. This fact only solidifies the notion that Israeli politics have become dysfunctional and fractured,” Arian tells TRT World.

“He [Bennett] demonstrated a rare ability – unprecedented in Israel’s political history – to exploit opportunities and leverage his political power, managing to leap from the status of a loser who didn’t even win enough votes to enter the Knesset in 2019 to almost being prime minister,” wrote Aluf Benn, a columnist at Haaretz.

While the Israeli right-wing parties have accumulated over 70 seats in the 120-member Knesset, they have failed to form a stable government after four inconclusive elections in two years.

“Of course there are many causes for that. But the main reason is Netanyahu,” Arian says. Because he is such a 'polarizing, deceptive, and manipulative' politician, many of his former partners on the right and extreme right like Avigdor Lieberman, Gideon Sa'er and Bennett "hate him so much that they are willing to work with other parties, which they disagree with on most issues just so they could get rid of him,” the professor adds.