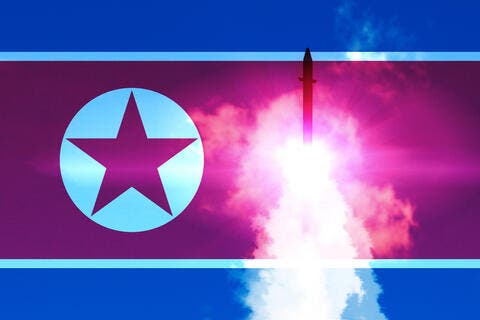 North Korea’s Nuclear Program is a Threat. Why?

The cruise missiles, which had been under development for two years according to KCNA, demonstrated an ability to hit targets 932 miles away during flight tests on Saturday and Sunday.

Thought to be the nation's first known testing activity in months, a successful launch of long-range missiles reinforces Kim Jong Un's commitment to expanding his military capabilities amid a stalemate in nuclear negotiations with the United States.

The decision to conduct the tests on Saturday, when the US fell silent to mark the 20th anniversary of 9/11, is thought to be a tactic of petty provocation.

The reclusive North has long accused the US and South Korea of a 'hostile policy' toward Pyongyang, but continues to enhance its military arsenal despite its people suffering widespread famine, horrific living conditions and brutal repression.

The North hailed its new missiles as a 'strategic weapon of great significance' that meets leader Kim Jong Un's call to strengthen the country's military might, implying that they were being developed with an intent to arm them with nuclear warheads.

KCNA published photos of a projectile being fired from a launcher truck and an apparent missile with wings and tail fins traveling in the air, and reported that the missiles would provide 'another effective deterrence' to 'military manoeuvres of hostile forces'.

According to the KCNA report, the missiles travelled for 126 minutes 'along an oval and pattern-8 flight orbits' above North Korean land and waters before hitting their targets.

Though 'Supreme Leader' Kim did not attend the test launch, KCNA reported that top military official, Pak Jong Chon, observed the test-firings and called for the country's defence scientists to go 'all out to increase' the North's military capabilities.

Japanese Chief Cabinet Secretary Katsunobu Kato said North Korean missiles of such range would pose a 'serious threat to the peace and safety of Japan and its surrounding areas', while South Korea's Joint Chiefs of Staff said the military was analysing the North Korean launches based on US and South Korean intelligence to ascertain their actual effectiveness.

The test is likely just one of many more to come after Kim Jong Un doubled down on his pledge to bolster his nuclear deterrent in the face of US sanctions in January.

Kim also said then that his national defence scientists were developing 'intermediate-range cruise missiles with the most powerful warheads in the world.'

It comes days after it was revealed that the US special representative for North Korea will travel to Tokyo next week for talks with South Korean and Japanese counterparts on the denuclearization of the Korean Peninsula and other issues.

Ambassador Sung Kim will also discuss 'the immediate resolution of the abductions issue' during his visit, the department said in a statement on Friday.

Talks between the United States and North Korea have stalled since the collapse of a summit between Trump and Kim in 2019, when the Americans rejected the North's demand for major sanctions relief in exchange for a partial surrender of its nuclear capabilities.

Kim's government has so far rejected the Biden administration's calls for a fresh dialogue, demanding that Washington abandon its 'hostile' policies first.

The latest tests came after Kim threw an unusual parade last week in the capital, Pyongyang, that was a marked departure from past militaristic displays.

The parade showcased anti-virus workers in hazmat suits and civil defence organizations involved in industrial work and rebuilding communities destroyed by floods, instead of the typically provocative militaristic displays.

Experts said the parade was focused on domestic unity as Kim now faces perhaps his toughest test, with North Korea wrestling with US-led economic sanctions over its nuclear weapons and pandemic border closures that are causing further strain on an already broken economy.

A slim-looking Kim Jong Un was seen among the unmasked crowds smiling to onlookers and hugging children at the event, which began at midnight on Wednesday in Pyongyang's Kim Il Sung square, according to the official KCNA news agency.

The leader, who almost always wears a Mao suit at official functions, was dressed in a Western-style suit and tie and did not deliver a speech at the event.